A report by Alina Doodnath for Loop Trinidad.

Would you buy, and drink from, a water bottle made of seaweed?

A group of students at the University of the West Indies (UWI), St Augustine, is working to develop a new bioplastic prototype that can do just that.

The team, which comprises post-graduate and doctorate students at the UWI’s Chemical Engineering department, has been working to adapt the famous Ooho water bottles (developed by Skipping Rocks Lab UK) as a first step in developing a new bioplastic prototype which look like conventional plastic but would be entirely biodegradable.

Team leader Dr Keeran Ward said he was introduced to the product about a year and a half ago while pursuing his PhD at the Imperial College in London, where he was invited to help work with the team there.

Ward said the new prototype they are working on, which seeks to improve upon the Ooho membrane, has far-reaching implications for the environment, as the product will be using Sargassum seaweed which has been deposited in tonnes on the country’s beaches in years past. 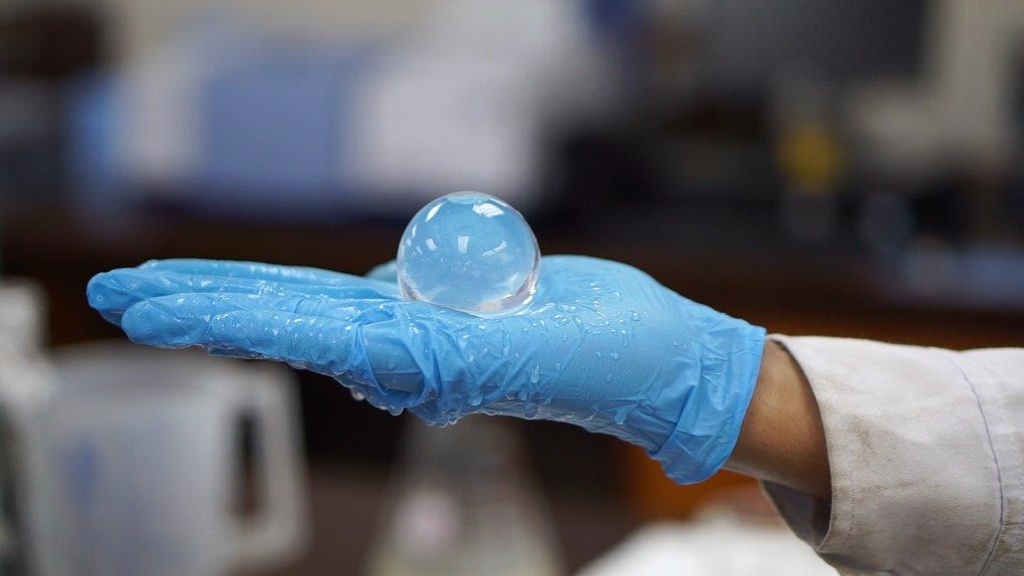 “SkippingRocksLab (UK) approached me about using alginate (the element in seaweed that gives its jelly-like consistency). It’s their work. And we came on board to try to optimise their Ooho membrane to create a new prototype.”

He said the problem lies in upgrading the membrane to a harder consistency for this new bioplastic prototype.

“The problem with the membrane is that it ‘sweats’ a lot, so they needed to come up with a better prototype to find out how they can encapsulate other things besides water, for examplefruit juice, wine, etc to try to make it a bit more marketable and to encourage people to not use plastic,” he said.

The team has since been investigating the potential of Thin Film Composite (TFC) membranes that utilises the similar technique as the Ooho membrane but is more durable and has similar material properties to conventional plastic.

“By applying the same technique we expect the TFC membrane prototype to have similar characteristics,” he said.

By using alginate extracted from seaweed the TFC membrane prototype can be used for two purposes:

The first prototype would consist of conventional plastic-like packaging comprised of entirely organic components which would ideally be used for conventional disposable water bottles, replacing the traditional plastic.

These bottles, unlike typical water bottles, would decompose back into the ecosystem, reducing the problem of inorganic waste.

The second part of the project aims to create an industrial seaweed-based filter for use in waste treatment facilities which would screen out heavy metals from water such as lead, cadmium, and mercury, which are harmful cancer-causing toxins.

Dr Ward, who is also a lecturer in Chemical Engineering, Membranes and Biopolymers at UWI, said considering the country’s recurring problem with Sargassum seaweed which accumulates every year, the product seemed like an excellent way to make use of this organic material.

“We found that there’s a lot of seaweed from the Sargassum influx which we have between April and May, and we can utilise the polymer seaweed and try to make these membranes.”

He said the team found however that the Ooho product in its present state is weak as a plastic.

“It’s very weak as a plastic prototype. It’s very innovative and cool, everyone likes to play with it, but if we were to actually make a bottle we’d have to come up with our own optimised prototype,” he said.

The team has since been testing the composition of the membrane in order to scale the formula up to create a plastic prototype.

The seaweed would be blended with other starches to create a more rigid structure, which could hold water, juice, wine or any other liquid.

Dr Ward says at present the membrane is able to encapsulate water for several days after it is compacted.

And, as the membrane is biocompatible (derived from a naturally occurring resource), and biodegradable, it’s more sustainable and emits fewer greenhouse gases than conventional plastics.

The team has also submitted an application to the Green Fund for assistance with their research.

The second product being developed can have far-reaching potential for industrial development, regionally and internationally, once completed.

Many citizens are concerned about the leaching of toxic chemicals into drinking water. One example would be the Guanapo Landfill, which lies uncomfortably close to the Guanapo River, a major water source, although the Water and Sewerage Authority has assured citizens that the water is safe to drink.

The use of thin film composite Calcium Alginate Membrane, if developed successfully, can be used to filter out harmful toxins from industrial and waste facilities, which might leach into groundwater and rivers after rainfall.

Dr Ward says Sargassum has effectively been proven to filter out lead and is being tested for cadmium at the moment.

Dr Ward says although they are still in the early stages, the research has tremendous implications for marketing a viable product for export.

“The aim of it is in about four to five years, is all goes well, we’ll be able to have a start-up initiative here at UWI, which is one of the goals that the new principal, Professor Copeland, has identified.”

“Our aim is to have a prototype that can be used for various products such as wastewater treatment or plastic remediation, and then we can get investors on board,” he said.

However, it was not all smooth sailing, as the team had several hurdles, and may likely have several more before succeeding with their products.

“The alginate is good but it’s not the purest, that’s a challenge as we need to try to make it a bit more pure so that it can make a better TFC prototype.”

“Right now the membrane is working for the wastewater treatment of heavy metal ions. These membranes eat lead, they literally take it out of the solution immediately, at least that’s what we’re seeing from the results, and with the alginate from the seaweed that we have at Manzanilla, it’s also working quite well,” he said.

The other stage, he said, is trying to mimic the properties of plastic using the alginate.

“That’s a problem we’re having, but these are things that my research group is working hard on as part of their PhDs,” he said.

Dr Ward said the team will continue to work with the Department of Aeronautics at Imperial College and the Department of Chemistry at UWI to create an optimised prototype, as well as developing commercial grade alginate extracted from local sources of Sargassum for the fabrication of these TFC membranes.

The team will also look at the effect of membrane additives such as biomaterials (starch, cellulose, pectin, clays etc.) to achieve maximum adsorption of heavy metal ions.

This will also provide a prototype sustainable bioplastic model that is able to produce less CO2 emissions and reduced environmental impact whilst also maintaining all the properties of conventional plastic.

Dr Ward also wants to assure the public that the UWI is definitely strengthening its research and development for creating technology with viable, profitable applications.

“I just want people to know that there is research going on at UWI and it’s heading in a positive direction, and we’re going to continue to develop areas of innovative research and development.”

“People who can contribute or help develop this technology are welcome to come and be a part of it,” he said.

Dr Ward added that his team is also concerned about conservation and helping to create environmentally-friendly products that can benefit the country.

“I think these products can definitely help. By making a biodegradable alternative we can try to combat the pollution, while also trying to correct the behaviour, and I think that’s where this project fits,” he said.

The research team is as follows: