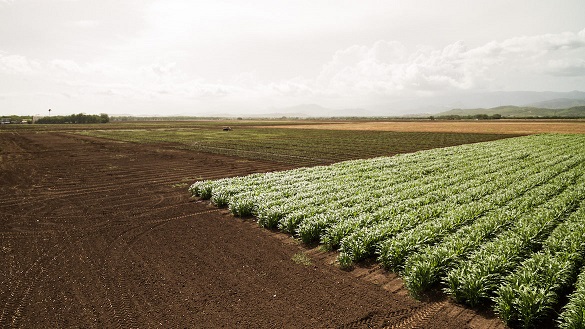 The full title of the article is “The Boom of Monsanto and other Seed Corporations Blows in the South of Puerto Rico,” and it centers on the activities of Monsanto and other multinational seed corporations from Guayama to Juana Díaz, Puerto Rico. Eliván Martínez Mercado (Centro de Periodismo Investigativo) refers to the region as the transgenic epicenter of the island.

The blades of the windmills revolve over crops of genetically modified plantations of soybean and corn, plantain and farms that have been crushed by the extended use of concrete. The Caribbean Sea appears, with green areas to the left, and to the right an exit leading to an occupied territory: multinational seed corporations, such as Monsanto, control 31% of the land with the greatest potential for agriculture in the municipality of Juana Díaz. It is the transgenic epicenter of Puerto Rico.

From north to south, from east to west, seed corporations already dominate about 9,712 public and private acres in the island. The area controlled by these corporations is equivalent to the area destined in 2016 for the cultivation of plantains, which the territory’s Department of Agriculture identifies as the most important crop in the country, economically speaking.

No one knew of the silent boom of agrochemical and transgenic corporations on the island’s finest farms, until the Center for Investigative Journalism (CPI, for its Spanish acronym) completed an inventory of the properties after field visits and consultations with public documents, and then analyzed the area with digital geographic information provided by the Planning Board. With the advance of seed corporations in Puerto Rico, the Island became, between 2006 and 2015, the locality with more permits to do experiments with transgenics in the United States and its territories.

In Juana Díaz, khaki-colored military trucks appear behind the fences of Fort Allen in the US Army Reserve, and taking a turn right, in the Capitanejo neighborhood, employees of the seed corporations walk by wearing white protective gear from head to toe. They are clear signs of the intensive work with chemicals that takes place in the repetitive landscape of soy and corn. This US colony is a paradise for the corporations that dominate the global transgenic seed and agrochemical industry: Monsanto, Bayer CropScience, DuPont Pioneer, Syngenta, Dow AgroSciences, AgReliant Genetics and Illinois Crop Improvement.

This industrial sector received more than $526 million in subsidies and tax exemptions between 2006 and 2015, according to an analysis of those benefits contained in government documents. Those were the years when Puerto Rico was involved in defaulting on its $69 billion debt, prompting the imposition of a Fiscal Oversight Board on the Island by the United States Congress.

In that same decade, multinationals took control over 14% of the public lands belonging to the Lands Authority of Puerto Rico that had the greatest potential for food production in the agricultural corridor that runs from Guayama to Juana Díaz. This is indicated by the calculations made with geographic information systems by David Carrasquillo, President of the Puerto Rican Planning Society, at the request of the CPI. The U.S. territory only produces 15% of its food, according to the Department of Agriculture. Multinationals do not use these lands to produce food, but to experiment with seeds they send out of the country where the research and development process continues, and then they sell them in the global market. Seed corporations not only lease, but indeed have bought about 50% of all the farms they control. Monsanto already owns 1,711 acres, while the Dow AgroSciences and Mycogen Seeds alliance has 1,698.

To the left of Highway # 1, just before reaching the Bucaná River, a wire mesh fence topped with barbed wire rises. It does not display a sign with the Monsanto logo, the company to which it belongs, according to the Registry of Property. Between the gaps of the fence you see a land without grass, trucks that pour a chemical on the ground, and a white shed in the distance.

With 1,030 acres, the equivalent to 600 soccer fields, this is the largest estate of the entire seed company’s inventory. To the north, in the Sabana Llana neighborhood, 494 acres of property begin, belonging to the same multinational company based in the state of Missouri. To the east, fields destined to experimentation are being rented out by the Illinois Crop Improvement, an association that works for the agricultural interests of the state of Illinois and Syngenta Seeds, a Swiss company. [. . .]

Photo from a previous article by CPI: http://periodismoinvestigativo.com/2016/07/puerto-rico-gives-away-over-519-million-to-multinational-seed-corporations-including-monsanto/

6 thoughts on “The Boom of Monsanto in Puerto Rico”