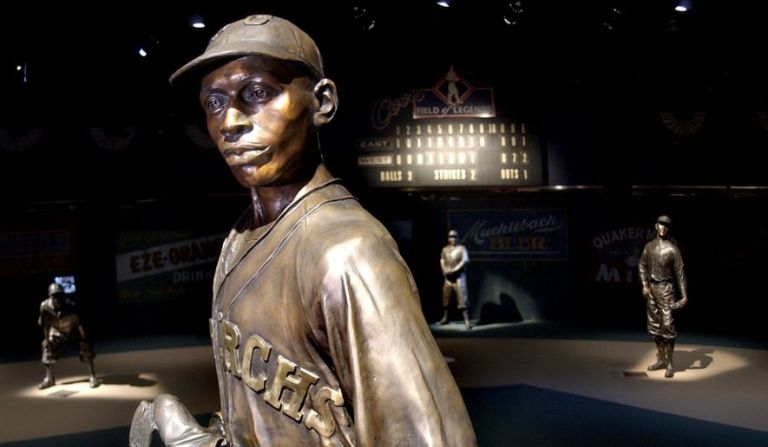 A report by Thom Loverro for the Washington Times.

Friday, July 7, should always be a day to celebrate in Major League Baseball — the birthday of the Negro League legend Satchel Paige, born 111 years ago (it is generally believed) in Mobile, Alabama.

Paige remains a reminder of what we missed in America when the major league game was segregated for half of the 20th century, and players like Paige were relegated to performing on their own stage in Negro League Baseball.

By the time Paige was able to pitch in the major leagues — July 9, 1948, for the Cleveland Indians — he was well past his prime, but still effective and always entertaining, particularly with the wit and wisdom he would share.

Most noteworthy was his legendary saying, “Don’t look back, something might be gaining on you.”

Something nearly caught up to Satchel Paige 80 years ago in the Dominican Republic, when the Negro League star was caught in the middle of a political baseball war between dictator Rafael Trujillo and his rivals that nearly cost Paige his life in a tale of gangsters, soldiers and some of the greatest Negro League players in history.

In 1937, baseball was a national obsession in the Dominican Republic, a country ruled by Trujillo, a dictator who ruled through fear in all arenas but the baseball field, where the hearts of his countrymen could be won or lost.

So Trujillo decided he would win their as well with his own team, built by raiding some of the greatest Negro League players in America. He took over the operation of not one, but two of the existing — and rival — teams in Santo Domingo, Escondido and Licey. For this season only, the teams merged to form one squad, the Ciudad Trujillo Dragons (Trujillo had already renamed Santo Domingo, the capital city, Ciudad Trujillo).

Trujillo’s political opponents owned a stake in the two other teams in the league. They also raided the Negro Leagues that season, bringing in greats like George Scales, Spoon Carter and Chet Brewer, among others, setting up a war that was, on its surface, baseball. Underneath? Something much more. After all, it would be a loss of face for the dictator not to have the best baseball team in the country.

Trujillo recruited Satchel Paige, stealing him from a Pittsburgh gangster who had built perhaps the greatest Negro League baseball team of all time.

The story goes that when the Pittsburgh Crawfords began spring training in New Orleans in 1937, Paige was approached by Trujillo’s agents and offered anywhere between $6,000 and $15,000 (the amount varies according to reports) to leave the Crawfords and play for Trujillo that year. He was also given money to steal Josh Gibson, Cool Papa Bell and other Crawford players.

Trujillo, that man took Gus Greenlee’s ball club and put it in Santo Domingo. He just took them right off Gus. But he got himself a ball club. Nobody could touch us,” Bell recalled to author Rob Ruck in the book, “The Tropic of Baseball.”

Greenlee, the owner of the Crawfords, was furious. As a high profile Pittsburgh nightclub owner who built his empire on illegal numbers games and bootlegging, Greenlee was the one used to doing to strong-arming and stealing.

In 1930 Greenlee raided the other established black team in town, the Homestead Grays, of Gibson, Judy Johnson and Jud Wilson. He got Bell and Jimmy Crutchfield from other black teams. The Crawfords, who won the Negro National League championship in 1935 and 1936, may have been the greatest Negro League baseball team ever assembled.

Greenlee reportedly tried to get court orders barring the players from playing for Trujillo. But it had no effect on what was taking shape in the Dominican Republic — a baseball war.

It was a war that put Paige and the other stars at huge risk.

In his autobiography, “Maybe I’ll Pitch Forever,” Paige said the players were treated like heroes when they arrived in the Dominican. During a party at one of Trujillo’s plantations, the pitcher was pulled aside by a reporter and told to be careful because “Trujillo won’t like it if his club goes around losing.”

“That reporter scared me good,” Paige wrote. “And I could see Trujillo with those soldiers around him all the time, sure was a powerful man.”

Trujillo wasn’t the only one surrounded by soldiers. The players were reportedly constantly under guard. That could have been interpreted several ways — and it was.

Some said Trujillo was protecting the players. The players didn’t believe that. Paige said their presence made him fearful. “I started wishing I was home when all those soldiers started following us around everywhere we went and even stood out in front of our rooms at night,” he wrote.

All this came to a frightening head when Trujillo’s Dragons played the seventh and deciding game of the championship series against Estrellas de Oriente.

Trujillo’s team rallied from three games down to force a seventh game. The night before the final game, Chet Brewer, who had been pitching for the Santiago team, went looking for Paige and the other players on Trujillo’s team. “We were looking for Satchel and them and we couldn’t find them,” Brewer told Mark Ribowsky in his history on Negro League baseball. “So a little kid on the street, he said, ‘Esta en la carcel’ — that they were in jail. Trujillo put them in jail so they wouldn’t roust around.”

When Paige and the players reached the field the next day, they found Trujillo’s troops lined up with rifles and bayonets near the first base stands. The rival owner’s troops lined the stands on the third base side. “You’d have thought war was declared,” Paige wrote. “We were guarded like we had the secret combination to Fort Knox.”

Paige wrote in his autobiography that the team’s manager told them before the game, “You’d better win,’ he said. ‘Whaddya mean, we better win?’ I asked. ‘I mean just that. Take my advice and win.’”

In a 1953 article in Collier’s magazine, Paige said that he believed if they lost the game, “There was nothing to do but consider myself and my boys passed over Jordan.”

Trujillo’s team was down a run going into the seventh inning. “You could see Trujillo lining up his army,” Paige wrote. “They began to look like a firing squad. In the last of the seventh we scored two runs and went ahead 6-5. You never saw Ol’ Satch throw harder after that. I shut them down the last two innings and we won. I hustled back to our hotel and the next morning we blowed out of there in a hurry. We never did see Trujillo again.”

There may have been no bloodshed, but there were casualties. Paige was banned from Negro League competition, though it was short lived. Upon returning from the Dominican, Paige and other black ballplayers toured the country on a team sometimes called the Trujillo All-Stars and the Satchel Paige All-Stars. Paige and some other players played in Mexico the following year, but eventually the players found their way back into Negro League baseball. The Crawfords, one of the all-time great teams, were finished. Greenlee sold the team in 1939.

The 1937 season nearly destroyed the game in the Domincan Republic. In his book “Sugarball,” Alan Klein was told by a Dominican writer, “We wound up killing professional baseball here. Although we continued to play amateur ball, we spent many years without professional ball after 1937. The 1937 season stopped baseball. All our money was gone. We were exhausted financially and in enthusiasm also.”

For Paige, he continued to outrun whatever was gaining on him until he passed away on June 8, 1982.

One thought on “Satchel’s tale of baseball, gangsters and the dictator”