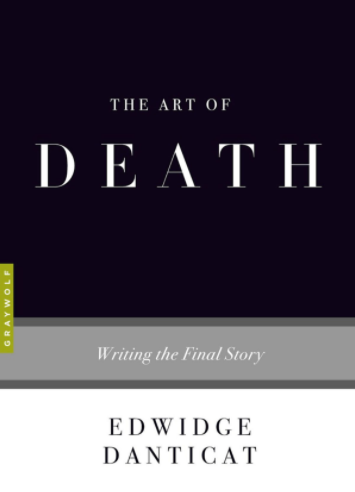 A review by Jim Higgins for the Milwaukee Journal Sentinel

“The Art of Death: Writing the Final Story” by Edwidge Danticat; Graywolf (160 pages, $14)

Edwidge Danticat’s “The Art of Death” can be read as the book version of a craft talk an artist might give to less-experienced colleagues. Only in this case, the craft is living and the technical challenge under discussion is death.

The Haitian-American novelist’s succinct book is the 13th in a long-running series published by Graywolf Press exploring issues in literary writing. But the way she engages her subject makes this a book almost everyone can appreciate.

While Danticat analyzes death scenes and writers’ reflections on mortal moments from Toni Morrison and Zora Neale Hurston to Albert Camus and Haruki Murakami, her mother’s life and death ground her book.

“I have mourned my mother in many ways — mostly by sharing stories about her with family and friends — but writing about my mother is the most active way I have grieved,” she writes.

Danticat describes how her mother remained tranquil and level-headed during her dying days, including her chemotherapy. At Manman’s mother’s request, they had nightly devotions together, singing from a French hymnbook, praying and sharing Bible verses. Anticipating her mother’s death, Danticat had started reading C.S. Lewis’ “A Grief Observed,” about his own grief after his wife died. She found herself crying uncontrollably “over the deaths of people I barely knew … I realized that I was rehearsing, so it wouldn’t hurt so much when it was my turn.”

As a native of Haiti, she also has experience with sudden, violent death. The devastating Haitian earthquake of 2010 killed her cousin Maxo and his 10-year-old son. Visiting Haiti a few weeks later, she re-read Murakami’s story collection “After the Quake,” a book whose traumatized characters she found “both instructive and comforting” for their range of reactions “from numbness to flights of magical realism that some might consider madness or simply grief.”

A strength of Danticat’s book is the way she moves back and forth between her life and literary texts, using one to understand the other and vice versa. “Wanting to Die,” her chapter on suicide, travels from Camus’ famous words in “The Myth of Sisyphus” through Toni Morrison’s “Song of Solomon” and Tolstoy’s “Anna Karenina,” to scenes Danticat wrote for her own books “Breath, Eyes, Memory” and “Krik? Krak!,” to grappling with the suicides of real-life friends, through Langston Hughes’ haiku-like poem “Suicide’s Note,” to a memoir of the late Anne Sexton by her daughter. (A digression: Danticat’s discussions of scenes from “Song of Solomon,” “Sula” and “Beloved” make me wish that she one day writes a whole book on Toni Morrison’s fiction.)

In writing about the Haitian earthquake and the Sept. 11 attacks, Danticat raises the inevitable concern that “the writer’s creation might pale — or fail — in comparison to the news, documents, photographs, video, and, more recently, cell phone footage.” But, calling on Don DeLillo’s “Mao II” for backup, she argues that there’s “a heart-stopping, breathtaking, indescribable element to some sentences that even the most carefully chosen image can’t match, due to the sentence’s precision, specificity, clarity — or ambiguity, opacity, or mystery — rhythm, lyricism, and sometimes even shock value.” Her role models for disaster writing go back to the granddaddy of the subgenre, Madison native Thornton Wilder’s “The Bridge of San Luis Rey” (1927), whose closing words Tony Blair quoted many decades later during a memorial service for British victims of Sept. 11.

In “The Art of Death,” Danticat writes clearly and judiciously about a subject that is challenging for both writers and people to face directly. Her range and grasp of literary references is wide and powerful; she certainly turned me on to books I didn’t know before, such as Chitra Banerjee Divakaruni’s “One Amazing Thing.” The final prayer she wrote in Manman’s voice may bring both tears and laughter to anyone who has lost a mother.