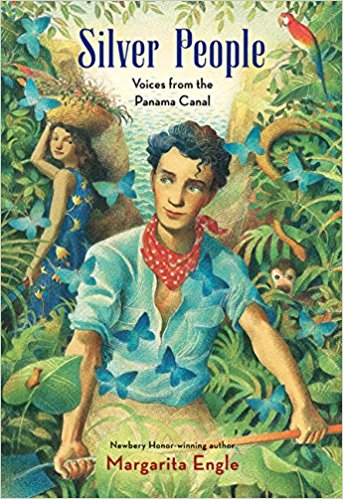 The list originally appeared in the Horn Book. Thanks, Summer!

June is Caribbean American Heritage Month, which celebrates “the significance of Caribbean people and their descendants in the history and culture of the United States.”

Summer Edward, founder and editor in chief of Caribbean children’s literature magazine Anansesem, was kind enough to direct us to her recommendations of recent or forthcoming kids’ and YA books by and/or about Caribbean and Caribbean American people and to consult with us about the list below, stressing the importance of #ownvoices. There certainly aren’t enough books out there, and those that do exist aren’t as visible as they should be. We are excited to be publishing Summer’s article “Lifting the Invisibility Cloak of Culture: Why Caribbean Children Don’t See Themselves Enough in Books” in an upcoming issue of The Horn Book Magazine. (Read her 2016 Horn Book interview with Deborah Ahenkorah, cofounder of the Golden Baobab Prize and “Torchbearer for African Children’s Publishing.” Also enjoy Meg Medina’s Writer’s Page article “On Writing the American Familia” about her family’s emigration from Cuba to the United States; and Ibi Zoboi’s “A Fine Bookshelf” about seeking mirror books for her daughters.)

Some of Summer’s recommendations, old and new, were on our radar, so you can read their Horn Book reviews below — but do visit Anansesem for additional titles and much more.

Agard, John, Nichols, Grace and Felstead, Cathie  A Caribbean Dozen: Poems from Caribbean Poets
93 pp. Candlewick 1994. ISBN 1-56402-339-7
The collection celebrates the flavors and textures of a Caribbean childhood, from dinners of “coo-coo and callaloo” to steel bands and playground chants. The language swings to island rhythms and reflects delight in the play of words. Felstead’s collage-style illustrations burst with animation and color, contributing to the tropical feel of the book.

Agard, John, Nichols, Grace and Jabar, Cynthia  No Hickory, No Dickory, No Dock: Caribbean Nursery Rhymes
42 pp. Candlewick 1995. ISBN 1-56702-156-4
Both original and traditional rhymes capture the spirit of the Caribbean and the essence of familiar Mother Goose rhymes. The lively rhymes are enhanced by colorful, playful scratchboard illustrations.

Alvarez, Julia  The Secret Footprints
40 pp. Knopf 2000. ISBN 0-679-89309-1 LE ISBN 0-679-99309-6
Illustrated by Fabian Negrin. Based on Dominican folklore, this dreamy story tells how a bold ciguapa almost reveals her tribe’s whereabouts. Ciguapas are beautiful creatures who live underwater and hunt for food on land at night; their feet are on backwards, so their footprints never give their location away. Illustrations in a rich blue-green palette bring out the magical realism in this well-told tale.

Bloom, Valerie and Axtell, David  Fruits: A Caribbean Counting Poem
26 pp. Holt 1997. ISBN 0-8050-5171-6
A girl and her younger sister count from one to ten as they happily, and a bit sneakily, eat their way through a juicy assortment of Caribbean fruits, including guavas, red apples, june-plums, mangoes, and bananas. The verse, told in buoyantly rhythmic Jamaican Patwa, is enhanced by light-dappled oil paintings rendered in lush tropical colors. Glos.

Bryan, Ashley  Turtle Knows Your Name
32 pp. Atheneum/Karl 1989. ISBN 0-689-3157
In a story about a boy with a long name, verbal images are as important as visual ones, for the storytelling is filled with repetition, rhythm, and rhyme, while the watercolor paintings are bursting with vitality.

Danticat, Edwidge  Mama’s Nightingale: A Story of Immigration and Separation
32 pp. Dial 2015. ISBN 978-0-525-42809-1
Illustrated by Leslie Staub. In this gentle story, Haitian American Saya’s mother is incarcerated because she has no papers. Danticat’s direct, resonant prose doesn’t shy away from the realities–telling of the loneliness of missing your mother and the trauma of saying goodbye at the detention facility. Staub’s naive-style oil paintings keep the focus on the child; the larger issue of the plight of refugees and immigrants makes the story universal.

Engle, Margarita  Drum Dream Girl: How One Girl’s Courage Changed Music
40 pp. Houghton 2015. ISBN 978-0-544-10229-3
Illustrated by Rafael López. A young girl “on an island of music” dreams of becoming a drummer, but only boys play drums. The story is based on Millo Castro Zaldarriaga, a “Chinese-African-Cuban girl who broke Cuba’s traditional taboo against female drummers.” Poetic text takes its cues from Zaldarriaga’s chosen instrument. Saturated acrylic-on-wood illustrations capture the island’s musicality and the surreal dream-images that inspire young Millo.

Hallworth, Grace and Binch, Caroline  Down by the River: Afro-Caribbean Rhymes, Games, and Songs for Children
32 pp. Scholastic 1996. ISBN 0-590-69320-4
This lively collection of folk poetry features rhymes, chants, and games passed down year after year by children in Trinidad. Each piece resonates with the rhythm and flavor of Caribbean speech. The selection includes some verses recognizable to American children as well as some unfamiliar ones. Birch’s realistic watercolors celebrate the children and their culture.

Hohn, Nadia L.  Malaika’s Costume
32 pp. Groundwood 2016. ISBN 978-1-55498-754-2 Ebook ISBN 978-1-55498-755-9
Illustrated by Irene Luxbacher. Preparing for her first Carnival celebration since Mummy moved from their Caribbean town to Canada to find work, Malaika rejects the idea of reusing Granny’s old costume and comes up with her own idea. The bright mixed-media illustrations are filled with stylized images of Caribbean life. With text in the little girl’s colloquial voice, readers will quickly feel part of her circle. Glos.

Joseph, Lynn  Jump Up Time: A Trinidad Carnival Story
32 pp. Clarion 1998. ISBN 0-395-65012-7
Illustrated by Linda Saport. Lily resents the fuss over her older sister’s costume for her first Trinidad Carnival dance. Yet when Christine freezes in fear of being on stage, Lily urges her on with a loyal heart. Pastels infuse the illustrations with creamy rich colors as they depict the family dynamics through expressive, simplified figures.

Linden, Ann Marie and Russell, Lynne  One Smiling Grandma: A Caribbean Counting Book
25 pp. Dial 1996. ISBN 0-8037-1132-8
Short, rhythmical lines accompanied by sparkling full-page color illustrations become an album of images from a Caribbean island in this unique counting book about a young girl immersed in island life. The book provides a perfect setting for the depiction of a warm, loving relationship between a child and her grandmother.

Baptiste, Tracey  The Jumbies
234 pp. Algonquin 2015. ISBN 978-1-61620-414-3
Corinne La Mer, who has lived all her life on an unspecified Caribbean island, fights off a violent uprising of jumbies, fantastical indigenous creatures led by a female figure she discovers was actually her dead mother’s sister. Despite some heavy-handed messaging, Baptiste’s story, based on a Haitian folktale, is action-packed and original with an appealing cast of characters.

Behar, Ruth  Lucky Broken Girl
237 pp. Penguin/Paulsen 2017. ISBN 978-0-399-54644-0
In this unflinchingly honest novel based on the author’s childhood, Ruthie is just ten years old in 1966 when she arrives in Queens from Cuba with her family. After breaking her leg in a car accident, she remains immobile in bed for almost a year. When her neighbor introduces her to drawing and painting, she begins to heal emotionally. Effectively scattered Spanish phrases lend authenticity.

Hodge, Merle  For the Life of Laetitia
214 pp. Farrar ISBN 0-374-32447-6
When twelve-year-old Lacey wins a place in the government secondary school, it means leaving her happy Caribbean village home and going to live with her pompous, blustering father in a distant city. The proud, strong-willed girl survives the many demands of that year, but her best friend at school, who is determined to escape a future like her mother’s as drudge for the men in her family, tragically fails. A razor-sharp social novel with superb characterization and evocation of time and place.

Mordecai, Martin  Blue Mountain Trouble
353 pp. Scholastic/Levine 2009. ISBN 978-0-545-04156-0
Twins Jackson and Pollyread (so nicknamed for her favorite pastime) live in a village in Jamaica’s Blue Mountains. Trouble begins when Jammy Parchment is found squatting on their family’s land. Much of the story’s dialogue is in a melodic Jamaican patois. Mordecai’s descriptions of the close-knit community and the uniquely beautiful setting, including supernatural elements, are memorably vivid.

Alvarez, Julia  Before We Were Free
167 pp. Knopf 2002. ISBN 0-375-81544-9 LE ISBN 0-375-91544-3
This book bridges Alvarez’s two adult novels set during the final days of the Trujillo dictatorship in the Dominican Republic. In the fall of 1960, Anita, almost twelve, tries to gain some control over frightening events by writing in her diary. Her final months in the country are a poignant blend of typical adolescent concerns and the terrible realities of life under a violent dictatorship. This is a compelling account of a girl growing up too quickly while coming to terms with the cost of freedom.

Cartaya, Pablo  The Epic Fail of Arturo Zamora
248 pp. Viking 2017. ISBN 978-1-101-99723-9
Thirteen-year-old Arturo Zamora is part of a large, Miami-based, Cuban American extended family. When a scheming real-estate developer proposes to build a mixed-use development that would close the family restaurant, the entire Zamora family mobilizes to win the neighborhood’s support. Arturo narrates his story with liberal doses of Spanish, untranslated and non-italicized, adding a welcome and authentic texture to Cartaya’s debut novel.

Engle, Margarita  Silver People: Voices from the Panama Canal
260 pp. Houghton 2014. ISBN 978-0-544-10941-4
In melodic verses, Engle offers the voices of the dark-skinned workers (known as the “silver people”), whose backbreaking labor helped build the Panama Canal, along with the perspective of a local girl. Interspersed are occasional echoes from flora and fauna as well as cameo appearances by historical figures. Together, they provide an illuminating picture of the project’s ecological sacrifices and human costs. Bib.

Joseph, Lynn  Flowers in the Sky
234 pp. HarperTeen 2013. ISBN 978-0-06-029794-7
Nina’s Mami sends her from the Dominican Republic to join her brother Darrio in New York, imagining she’ll snag a wealthy husband. Unfortunately, Darrio’s reality is nothing like Mami’s dreams. With the help of some clear-sighted new friends, Nina weathers the truth about her beloved brother and their demanding mother. This is an absorbing picture of a young woman navigating a challenging new environment.

Older, Daniel José  Shadowshaper
300 pp. Scholastic/Levine 2015. ISBN 978-0-545-59161-4
When her grandpa Lázaro–bedridden and primarily mute because of a stroke–blurts out an incomprehensible warning, artist Sierra is plunged into a completely different New York: one with the reanimated dead, spirits, and shadowshapers. Sierra’s Puerto Rican family, lively Brooklyn neighborhood, and Haitian (possible) love interest make for a vibrant and uncommon, diversely populated fantasy that speaks to the urban teen experience.

Placide, Jaira  Fresh Girl
216 pp. Random/Lamb 2002. ISBN 0-385-32753-6 LE ISBN 0-385-90035-X
Fourteen-year-old Mardi is haunted by nightmares of her final days in Haiti. Life in Brooklyn is not much better: she hides from her family and is harassed at school. Mardi’s world is thrown into turmoil when her uncle Perrin joins them in America. Placide shares hints of the remembered horror that Mardi believes Perrin should have prevented. The vivid first-person narrative traces Mardi’s credible reclamation of her own self-worth.

Yoon, Nicola  The Sun Is Also a Star
349 pp. Delacorte 2016. ISBN 978-0-553-49668-0 LE ISBN 978-0-553-49669-7 Ebook ISBN 978-0-553-49670-3
Natasha, an undocumented immigrant from Jamaica facing immediate deportation, believes in science and rationality. Daniel, burdened with his Korean-immigrant parents’ expectations, believes in destiny and poetry. When their paths cross unexpectedly, and repeatedly, over one day, Daniel is convinced he’s going to fall in love. In a twelve-hour race against the clock, the teens’ alternating first-person narratives are fresh and compelling.

Zoboi, Ibi  American Street
330 pp. HarperCollins/Balzer + Bray 2017. ISBN 978-0-06-247304-2 Ebook ISBN 978-0-06-247306-6
After landing in New York from Port-au-Prince, Haiti, Fabiola’s mother is detained. Fabiola continues alone to her aunt and cousins in Detroit, where she receives a crash course in cultural differences and learns her family is involved in the drug trade. Throughout the story, Fabiola turns to her Vodou faith to reunite with her mother. Zoboi’s YA debut is equal parts gritty and transcendent.