A report from Phys.

Repair petitions filed in the wake of the 1918 Puerto Rico earthquake and tsunami, stored and forgotten in the San Juan archives for nearly 100 years, are giving scientists a house-by-house look at the damage wrought by the magnitude 7.3 event.

In the journal Seismological Research Letters, seismologists Roland LaForge and William McCann describe how they used the records to trace the impact of the earthquake in Aguadilla, the town closest to the 1918 epicenter.

The researchers combed through handwritten and often heartbreaking petitions for funds to repair homes battered or washed away by the tsunami, or damaged by earthquake ground shaking. Together, the data provide a “pretty accurate picture to find out where the damage was, and how far the tsunami made it inland,” said LaForge.

At the south end of town, in particular, the tsunami’s three to four meter- high mark could be determined from repair petitions from houses closely clustered together—where some homes reported wave damage and some were untouched by the waves.

The address-level findings are consistent with a 1919 reconnaissance of the earthquake damage and more modern calculations of tsunami wave heights, the researchers say. But the new study provides more detailed “ground truth” of what happened during the 1918 quake, said LaForge, and could be useful in predicting which parts of Aguadilla would be mostly likely to suffer damage during the next major earthquake.

In the United States, the Caribbean and Latin America, LaForge said, “finding and interpreting written historical earthquake damage accounts is difficult and time consuming, but we have learned that researching these old earthquakes has become more important over time”.

The October 11, 1918 Puerto Rico earthquake and tsunami is the most recent damaging seismic event to affect the island. More than 100 people died, and the island sustained $4 million dollars (1918 dollars) in damage, especially in the towns of Aguadilla, Mayagüez, Aguada and Añasco. 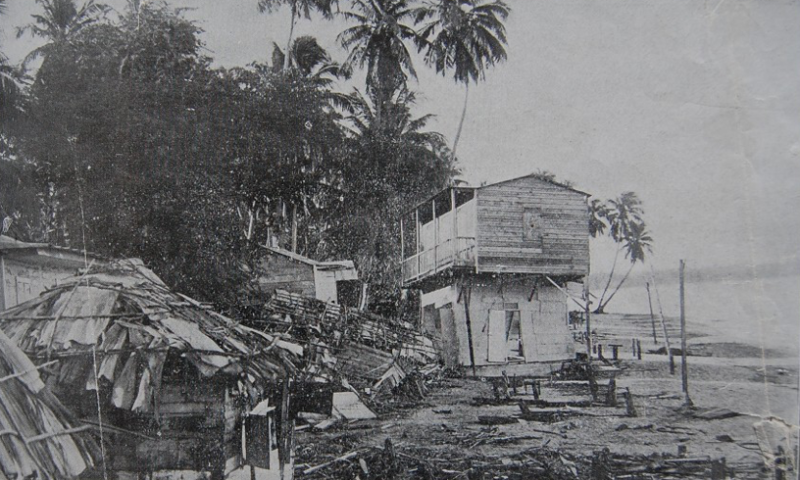 As part of the relief efforts after the earthquake, residents whose homes were damaged or destroyed submitted petitions for repair funds to a Special Earthquake Commission established after the event. Inspectors came out to review the damage claimed in each petition, and funds were awarded based on their recommendations.

McCann, a former professor at the University of Puerto Rico, stumbled across boxes of these petitions, unsealed for nearly 100 years, in the General Archive in San Juan, Puerto Rico. He later mentioned them to LaForge, who had worked with the U.S. Bureau of Reclamation and Puerto Rico Electric Power Authority on seismic hazard studies of dams on the island.

The two received a grant from the National Earthquake Hazards Reduction Program (NEHRP) to digitize and study more than 6000 pages of the petitions and other records and photographs related to the earthquake. Although 275 petitions were known to be received from Aguadilla, only 88 (32%) were discovered in the San Juan archives. Most of these appear to be petitions to repair damage rather than replacement of entire homes.

“The layout of the town is pretty much the same as it was in 1918,” LaForge explained. “And we had these detailed damage descriptions by neighborhood and street and address in some cases. We thought if we can match up these addresses with modern-day addresses to know where they were, we could get a pretty good picture of where the damage was and how severe it was.”

The petitions marked other losses as well. “Reading through the actual reports was very poignant at times,” LaForge said. “Some of these people lost family members, or knew people who drowned. You get a real idea of what people went through.”

LaForge hopes that other researchers—students at the University of Puerto Rico, perhaps— will use the digitized petition data to learn more about the earthquake and tsunami impact in other towns such as Mayagüez. “The dataset in general is a real gold mine.”

The Seismological Society of America, which publishes Seismological Research Letters, will hold a joint conference in April 2018 with the Latin American and Caribbean Seismological Commission in San Juan, Puerto Rico. The site of the Seismology of the Americas meeting was chosen in part to commemorate the 100th anniversary of the 1918 earthquake.