A report by Michelle Cheung for CBC News.

Unlike today’s competition where you have to earn the right to be crowned Queen of carnival, it was Hyacinth Noreiga’s stature that put her front and centre at Toronto’s first Caribbean festival in 1967.

“They had to find somebody the right size,” said the 5 feet, 8-inch-tall Trinidadian-Canadian. “They needed somebody, a tall person, I think. So they asked me.”

She’d only been living in Canada for a year when she donned the Jewel of the Lotus masquerade costume, consisting of a large petaled headdress and knee-length skirt topped with sequins and tentacled leaves. 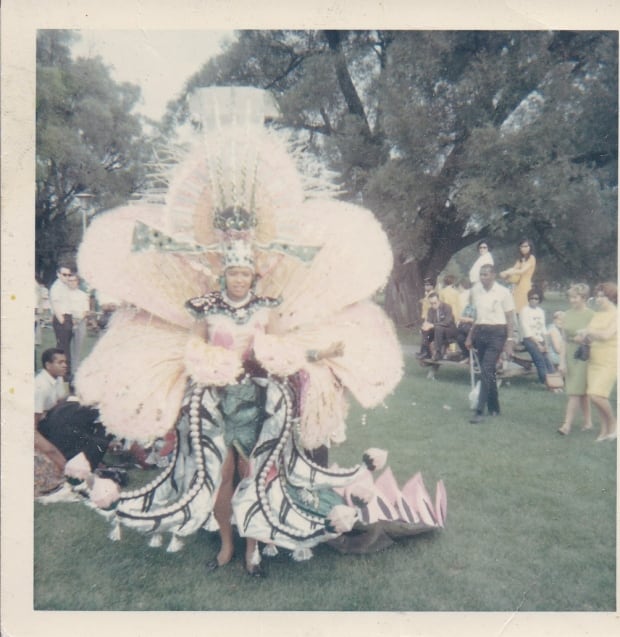 Noreiga said it had won Queen of Carnival in Trinidad that year.

The government of Trinidad and Tobago donated the Queen and King costumes to highlight Caribbean culture in Canada’s centennial year.

“I was really proud to represent Trinidad,” said Noreiga.

The 1,000-strong parade of masqueraders, and steel pan bands started at Varsity Stadium, walked across Bloor Street West to Yonge Street, down Yonge, and over to city hall.

“To be able to do this on Yonge Street with all the shoppers at Eatons and Simpsons … they just ran out of the stores out to the street because the music attracted them,” said Noreiga. “The people had never seen anything like this. They wanted to pose with you.”

She felt like a queen but said the whole experience was exhausting.

“It was a hot day but I managed to get to city hall. But once I got there it was over: I just deposited the costume and made my way home to have a shower, and in my bed.”

Noreiga said she sewed masquerade costumes for mas bands and her kids for years. She no longer attends but her daughter flies up from Los Angeles every year to join the fun.

“The costumes now are like. the least you wear the better.”