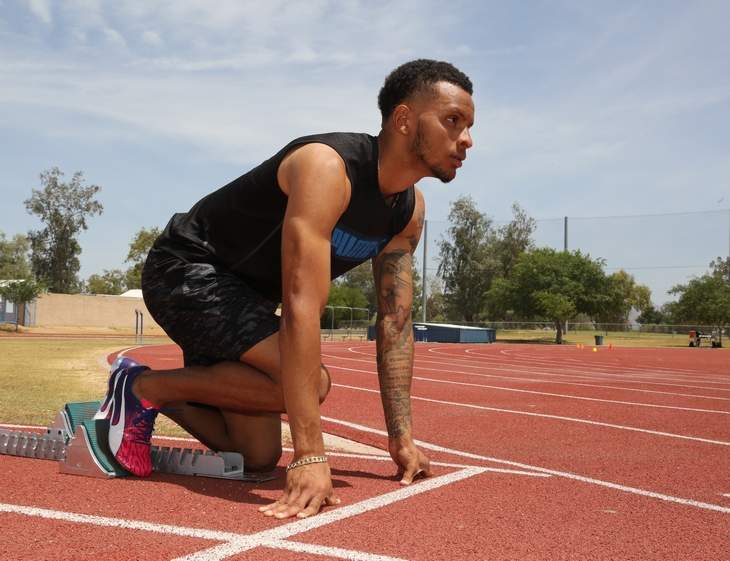 A report by Kwame Laurence for Trinidad’s Express.

Andre De Grasse is among the leading contenders to take over from Usain Bolt as the world’s premier sprinter. And though he will be representing the land of his birth, Canada, when he faces the starter at the 2017 IAAF World Championships in London, England, the 22-year-old will have support from all parts of the Caribbean.

Born to a Barbadian father, Alexander Waithe and Trinbagonian mother, Beverley De Grasse, Andre is truly a regional product. Add to the mix the fact that he was discovered by Jamaican-born Canadian coach Tony Sharpe.

A witness to De Grasse’s first competitive race—a 10.91 seconds 100-metre run in basketball shorts from a standing start—Sharpe is convinced his former charge will take over from Bolt as the face of international track and field.

“For a guy that doesn’t run competitively or is untrained,” says Sharpe, “using no starting blocks and standing sideways to run sub-11, if you’re any sort of a sprint coach you’re going to say there’s something there, so I invited him out to give him some help.”

The rest is history. Five years later, De Grasse has three Olympic medals to his name, two more at the IAAF World Championships, and a couple Pan American Games titles.

Next up is the 2017 World Champs, and Sharpe is expecting De Grasse to beat Bolt in the London 100m dash. And with the Jamaican sprint legend apparently skipping the 200m at what is expected to be his retirement meet, Sharpe is confident of a second sprint title.

“I have no doubt Andre will win double gold…probably triple with the depth we’ve got in our 4×1 squad.”

But though De Grasse is, perhaps, the biggest threat to a triumphant Usain Bolt farewell celebration in London, the Canadian track star is well-loved in the global sprint capital.

“When I go to Jamaica to do Puma photo shoots,” says De Grasse, “they really respect me. It’s cool that they think of me as one of their own.”

De Grasse is not short on connections to the northern Caribbean island. In addition to Sharpe, two of his closest friends in Toronto, Jermaine Chisholm and Zachary Fox-Tapper, have Jamaican heritage. But for all Jamaica’s nationalistic fervour, both at home and in the wider diaspora, Chisholm and Fox-Tapper are anything but torn when De Grasse and Bolt square off on the track.

“My background is Jamaican,” says Fox-Tapper, “but I’m going to support my Canadian friend. I love Bolt, but now that Andre’s out there, Bolt’s the enemy.”

De Grasse has built a strong relationship with “the enemy”.

“It’s always good to talk to Bolt, see what he’s up to and how he manages his schedule. I need to be prepared. He’s a multiple Olympic champion, and that’s somewhere I want to be some day.”

De Grasse is also keen to be in Trinidad and Tobago for Carnival 2018. It won’t be the sprint star’s first taste of the Greatest Show on Earth though.

“Jouvert is probably the biggest occasion every time I go to Trinidad. When I was younger I played Jouvert, but next year I want to play mas.”

De Grasse’s mom is responsible for his love of Carnival.

“Andre started going to Trinidad at three months old,” Beverley reveals. “He went every year for Carnival, up until high school.”

Thanks to those annual visits to his grandmother’s home in Couva, Andre can boast of a truly Trinbagonian upbringing.

“Andre used to run about in Trinidad with little kids, bare feet,” his mom recalls, “and would talk like them. Somebody asked me if he was born there because of the way he would fall in place.”

Andre laughs out loud as he remembers the good ol’ days in central Trinidad.

“We played basketball and soccer. We would just hang out, go to the corner store and get some slushies and all that stuff.”

De Grasse’s last visit to Trinidad was in 2015.

“But it wasn’t a good occasion. My grandmother passed away.”

Most of the track star’s Trini memories, however, are pleasant ones. He speaks fondly of the culinary experience, one that still influences his meal choices.

Though De Grasse did not grow up with his father, he acknowledges his Bajan heritage.

“My dad took me to Barbados a couple times, and we have an okay relationship. I have one brother and two sisters. They’re very supportive, helping me a lot through school. And my brother just had a baby so now I’m an uncle. It feels pretty good.”

But for all his Caribbean connections, De Grasse is fiercely patriotic, and never entertained the idea of not running for Canada.

“In Trinidad a lot of people would say you should run for us. I tell them,” in his best Trini accent, ‘you hah tuh pay meh some money’.”

De Grasse is joking. He’s very serious, though, about his commitment to the “Maple Leaf”.

“As much as I love Trinidad, Canada has been really good to me. I grew up in Canada. I’m from there, I was born in Canada.”

The “Red, White and Black” will not be raised when De Grasse stands on the podium at future global meets. But here in T&T there will be some measure of pride, in the knowledge that Trinbagonian blood runs through the veins of Canada’s fastest man.