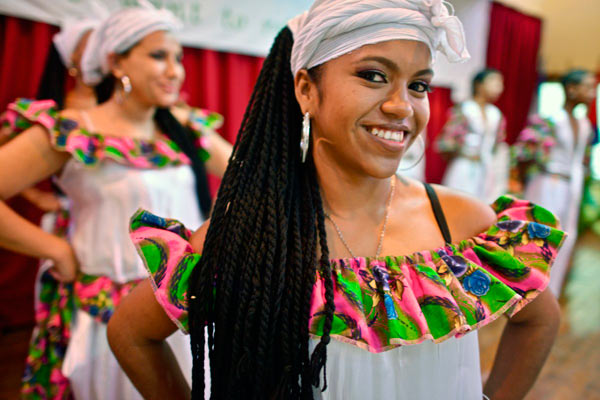 A report by Vinette K. Pryce for Caribbean Life News.

The inaugural Garifuna festival in Long Beach, California proved to be an ideal launch-port for what will now be an annual spring celebration of Black Caribbean and Central Americans from Belize, Guatemala, Honduras and Nicaragua.

Costumed women displayed the unique typical fashions that distinguish the Garifuna people whose colors are black, white and yellow.

A family atmosphere prevailed with the language of the people tempering a myriad of displays from craft vendors, culinary ambassadors and artisans who travelled from the east coast, Midwest and as far away as the homelands that comprise the specialized indigenous nationals.

Welcomed by the infectious dance beats by DJ Fuego of Matralleta de Oro, celebrants were treated by a multitude of talented traditional performers and demonstrators.

Following on the success of the first festival in 2011, later this month from May 21-27, the sixth annual Garifuna International Indigenous Film Festival (GIIFF) will be held in Venice, California.

Although a burgeoning calendar addition, the GIIFF is already acclaimed as one of the nation’s most prestigious film festivals celebrating Garifuna, Caribbean and indigenous cultures from around the world.

“We are happy to take audiences and moviegoers on a global journey celebrating culture through art and film,” the organizers said.

Since its launch the GIIFF has showcased a variety of films and created by Garifuna filmmakers — as well as many other indigenous people — and has hosted panel discussions, workshops, cultural presentations and award ceremonies.

Engraved plaques will be issued to winning entries and a Garifuna International Indigenous Film Festival Award will be presented. The latter is a humanitarian award presented for a film or documentary that embodies change in the world that teaches and brings awareness to the causes of the indigenous populace.

According to the GIFF mission statement: “It is in essence a venue that reconciles, entertains and portrays the very diverse and brilliant cultures to participants and attendees of the festival.” Organizers issued a call for any film or documentary that is relevant to the mission statement of the Garifuna International Film Festival.

“We will accept preview DVDs that are works-in-progress as well as films with temporary soundtracks or digital outputs.”

Feature films that have had commercial, theatrical, television or internet play in the US are eligible.

“We believe in supporting and encouraging young filmmakers — especially those who are from indigenous cultures — With this in mind, last year we began accepting submissions from filmmakers in accredited university / cllege filmmaking programs.”

Eligibility requirements demand that world premieres of feature-length films and shorts are a high priority and feature films must have been completed prior to April 3, 2017.

However, if relevant material is submitted, films and documentaries that have had prior screenings will be considered.

Films that have been submitted for consideration in previous years are eligible for re-submission. Feature films in a language other than English must be subtitled in English for festival consideration and presentation.

Feature-length fiction and documentary films must be between 75 to 90 minutes in running time.

Short films should be between 20 and 30 minutes long. And mid-length short films 45 to 60 minutes.