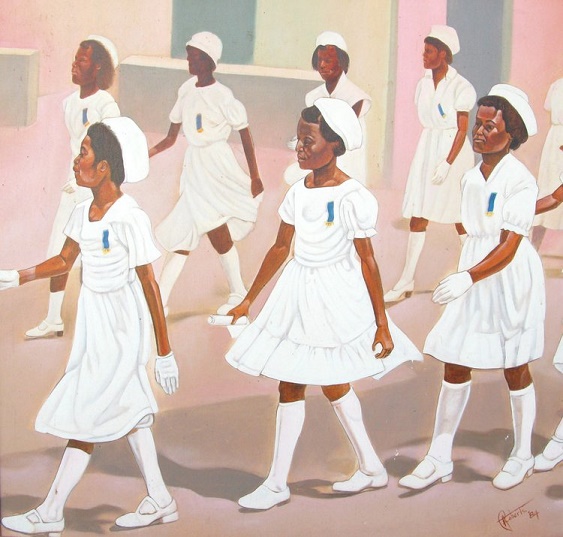 The National Art Gallery of The Bahamas (NAGB) recently featured Antonius Roberts’ “Procession of Females in White Uniforms” on their May newsletter.  One of The Bahamas’ leading artists, Roberts received his BFA in Painting from the University of the Arts in Philadelphia. He is currently the Curator of the Central Bank Art Gallery. Here are a few excerpts referring to the artist and his work (shown above).

[Antonius] Roberts created ‘Sacred Space’, a site comprised of twelve women sculpted out of dead casuarina trees overlooking a cliff on the Western end of Nassau. The site was once the landing point of slaves traveling from Africa. The repetition of women seen in Roberts’ ‘Sacred Space’ directly correlates to Procession of Females in White Uniforms, an oil painting depicting a group of women walking in an orderly fashion, as if part of a ceremony or procession. Roberts frequently revisits the female form, drawing light to the overlooked importance of women in our society and around the world.

The painting highlights a moment that seems mundane, eight women marching to their daily task in a way that feels structured and controlled. The identities of the women depicted are not unique – they each carry equivalent quiet expressions, similar body structures, and an identical wardrobe. This aesthetic choice highlights the idea of the workforce, a body of people who participate in labour as if just another part of the machine, working hard without any consideration of the individual’s hopes, dreams or aspirations.

The women are dressed in traditional colonial nursing uniforms, comprised of all white garments from head to toe. The traditional nurse uniform from Great Britain consisted of a white dress, apron and cap. This style was derived from the nun’s habit, as the nuns took care of sick and injured people before the 19th century. The uniforms also consisted of a nursing pin, a type of badge worn by nurses to indicate the nursing school in which they graduated. Most pins had a symbolic meaning, representing the history of the nursing program for that particular school. In the painting, Roberts only provides the blue and yellow colors of the badge. These two colors are indicative of the Bahamian flag – representing a workforce of individuals who have emerged from the Bahamas and are patriotically continuing to benefit the country with their labour.

The background color palette seen in this work is suggestive of the 1801 building located on Duke Street, now known as the Government House. It is comprised of a conch-pink and white trim, a perfect example of the merging of British-Bahamian and American Colonial architecture. Roberts has masterfully imitated this specific pink to directly reference the Bahamas, its Government, and the many years of British colonial influence. [. . .]