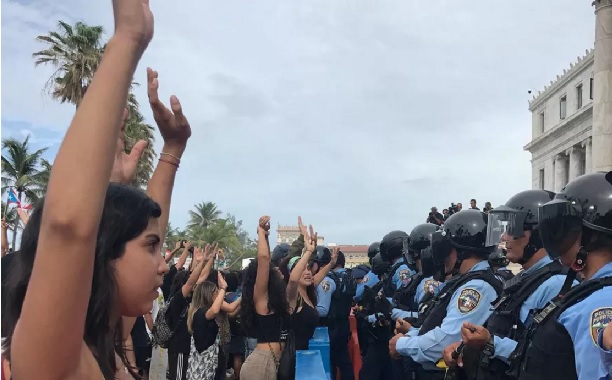 Peter Jordens has shared a series of articles dealing with the student strikes and protests against austerity measures in Puerto Rico (see list below). In “Students Are Now Leading the Resistance to Austerity in Puerto Rico” (The Nation, 27 April 2017), Ed Morales writes, “Some $40 billion of the island’s debt could be illegal—so, why is the government shutting down the audit commission?” Here are excerpts from Morales’s article:

Aurora Muriente Pastrana, who is both a law-school student and adjunct professor in the humanities department at the University of Puerto Rico (UPR), had come to the steps of Puerto Rico’s capitol building on April 18 with a group of university students, professors, workers, and activists to raise their voices against the passage of a bill that would eliminate the government-funded Debt Audit Commission, which was created in 2015 to audit the island territory’s $70-plus billion in debt. In solidarity with a group called the Citizen Front for Auditing the Debt, the growing crowd began to stir when representatives of the Citizen Front were not allowed access to the building to observe the bill’s hearings, as is their constitutional right.

Muriente, who is part of a movement that has shut down university operations since March, said the crowd was chanting “We’re Citizens, Not Criminals!” with some urging the police to join them, since their pensions were also threatened by austerity measures. But then, in a poignant echo of the violence that occurred on these same steps in 2010, the demonstrators were, without warning, beset by nightstick-wielding riot police, who fired a barrage of pepper spray at them. [. . .]

Both a preliminary report issued last summer by the Debt Audit Commission and a report issued by Saqib Bhatti and Carrie Sloan of the ReFund America Project found that some $36.9 billion of Puerto Rico’s debt was illegal because it either involved “extra-constitutional” debt saddled with predatory interest rates or “toxic” interest-rate swaps. Such findings are most likely behind the rushed bill just passed and signed into law by the current governor, Ricardo Rosselló, to repeal the legislation creating the Debt Audit Commission, as well as passage of a new resolution by Rosselló’s party ally, Senator Larry Seilhamer, requesting that the comptroller general of the United States audit the debt to comply with PROMESA.

While this year’s student movement shares some similarities with the one that took place in 2010, there are important differences, largely having to do with the increased urgency of the island’s fiscal crisis. “Back in 2010, students were fighting against a raise in tuition and an additional charge of $800 annually,” said María de Lourdes Vaello, a first-year law student who was also at the capitol on Tuesday. “The purpose of the university is to provide a high-quality education to the middle and lower classes, but now we’re facing cuts that threaten the very existence of the institution. It’s a much bigger moment.” [. . .]

A new deadline for the fiscal crisis is approaching: On May 1, the freeze extended by the PROMESA board on lawsuits over portions of outstanding debt will expire. Of the two debt-settlement mechanisms that PROMESA provides for, the Title III option, which invokes a modified bankruptcy procedure, seems most likely because it provides for an automatic stay on any legal action by creditors. But it also requires the formulation of a debt-restructuring plan. And any such plan would be much more advantageous to the Puerto Rican people if potential illegalities were revealed—as they were in the case of Detroit, which saved millions of dollars.

A report in Reuters last Friday said that lawyers for the Puerto Rico government were drafting an agreement “to avoid invoking bankruptcy protections in the short term.” Yet last week, Puerto Rico’s government dissolved its own debt commission, which had found promising evidence of illegality. In its place, the Senate, claiming the $2 million expense for the debt commission was too costly, passed a resolution requiring the US comptroller general to audit the debt, which the Senate claims is provided for by PROMESA. Opposition party (PDP) Senator Eduardo Bhatia countered by telling El Nuevo Día, “Section 411 of PROMESA does not say that, it does not say that an audit will be done; it says that a report will be made on how the debt is increasing and decreasing, and that it will have some elements. That’s not a debt audit; it’s a debt report.” [. . .]

“While University Students Are Protesting and Striking in Puerto Rico, the US Media Doesn’t Care One Bit,” Latino Rebels, April 26, 2017, http://www.latinorebels.com/2017/04/26/while-university-students-are-protesting-and-striking-in-puerto-rico-the-us-media-doesnt-care-one-bit