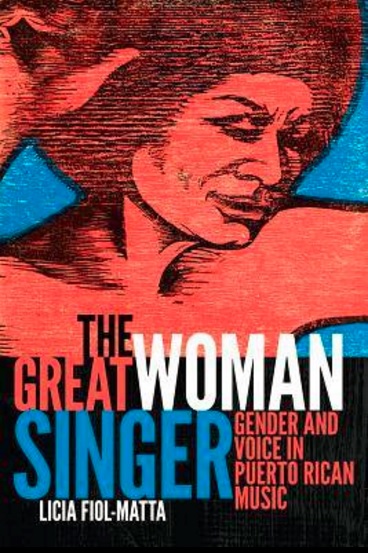 Book Culture invites the general public to the launch of The Great Woman Singer: Gender and Voice in Puerto Rican Music by Licia Fiol-Matta. She will be joined in conversation by Jack Halberstam and Alexandra T. Vazquez. Co-sponsored by The Center for Ethnomusicology at Columbia University, the event will take place tonight, Thursday, April 13th at 7:00pm at Book Culture (located at 536 West 112th Street, New York, New York).

Descriptio: In The Great Woman Singer, Licia Fiol-Matta traces the careers of four iconic Puerto Rican singers—Myrta Silva, Ruth Fernandez, Ernestina Reyes, and Lucecita Benitez—to explore how their voices and performance style transform the possibilities for comprehending the figure of the woman singer. Fiol-Matta shows how these musicians, despite seemingly intractable demands to represent gender norms, exercised their artistic and political agency by challenging expectations of how they should look, sound, and act. Fiol-Matta also breaks with conceptualizations of the female pop voice as spontaneous and intuitive, interrogating the notion of “the great woman singer” to deploy her concept of the “thinking voice”—an event of music, voice, and listening that rewrites dominant narratives. Anchored in the work of Lacan, Foucault, and others, Fiol-Matta’s theorization of voice and gender in The Great Woman Singer makes accessible the singing voice’s conceptual dimensions while revealing a dynamic archive of Puerto Rican and Latin American popular music.

Licia Fiol-Matta teaches in the Department of Spanish and Portuguese at New York University. She is the author of A Queer Mother for the Nation: The State and Gabriela Mistral.

Jack Halberstam is Visiting Professor of Gender Studies and English at Columbia University. Halberstam is the author of five books including: Skin Shows: Gothic Horror and the Technology of Monsters (Duke UP, 1995), Female Masculinity (Duke UP, 1998), In A Queer Time and Place (NYU Press, 2005), The Queer Art of Failure (Duke UP, 2011) and Gaga Feminism: Sex, Gender, and the End of Normal (Beacon Press, 2012). Halberstam is currently working on several projects including a book titled WILD THING on queer anarchy and a short book titled Trans* for UC Press, forthcoming in 2017.

Alexandra T. Vazquez is Associate Professor of Performance Studies at New York University. She is the author of Listening in Detail: Performances of Cuban Music (Duke University Press 2013). Her work has been featured in the journals small axe, American Quarterly, Social Text, women and performance, and the Journal of Popular Music Studies; and in the edited volumes Nonstop Metropolis: A New York City Atlas, Reggaeton, and Pop When the World Falls Apart. Vazquez is currently working on Writing Sound: The Florida Project, which investigates Florida as an under-theorized yet vibrant creative laboratory of the circum-Atlantic world.

Ana M. Ochoa Gautier is professor in the Department of Music and the Center for the Study of Ethnicity and Race at Columbia University. Her latest book Aurality, Listening and Knowledge in Nineteenth-Century Colombia (2014) is co-recipient of the Alan Merriam Prize in Ethnomusicology. She is currently working on the relationship between music, sound and the anthropocene, indigenous understandings of music and the relation to multinaturalism, and the relationship of silence, noise and music to the construction of postconflict. She has been a recipient of the Guggenheim Fellowship, the Alan Merriam Award in Ethnomusicology, and the Greenleaf Distinguished Scholar Fellowship, among others.