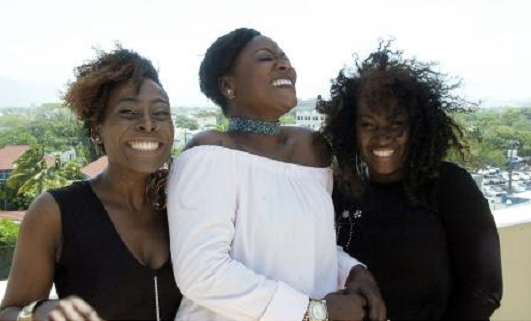 Kim Pommell, Sherida Sharpe, and Faith Waltson, the three Jamaica female lead singers of the six-member band Rising Tide, have returned home with the hope of winning the fandom of their country. According to Kimberley Small (The Gleaner), the trio is in Jamaica following the conclusion of their 15-date tour of France.

“It’s only right for Jamaicans to know what we’re doing,” Pommell told The Gleaner. “It’s a different side of the music, mixing reggae and jazz. It’s very rare that anybody try fi touch dat, because sometimes the notes get risky, and yuh haffi love music fi listen to it. The song dem different,” Pommell said.

“We’re jazz musicians who just love our (reggae) culture, so we fuse it,” Waltson added.

Rising Tide began about two years ago as a side project. After the lead singer of the original nine-member California-based band Groundation went on hiatus, the remaining members formed the female-led offshoot. Groundation is an American roots reggae band started by Harrison Stafford in 1999. Two years ago, the band went on hiatus, while founder and lead singer Harrison Stafford established a solo career. The remaining active members of Groundation who make up Rising Tide are Marcus Urani, who is the production lead and keyboardist, Ryan Newman on bass, and Paul Spina on drums.

After the release of their self-titled debut album in March 2016, Rising Tide embarked on their first tour, which took them to multiple venues across France from March 1 to 19.

[. . .] According to Pommell, the first time Rising Tide performed was on the Reggae Sun Ska Festival last August, where they opened for Damien ‘Jr Gong’ Marley in front of 20,000 people. [. . .]

One thought on “Rising Tide Creates Own Waves with Reggae, Jazz Fusion”