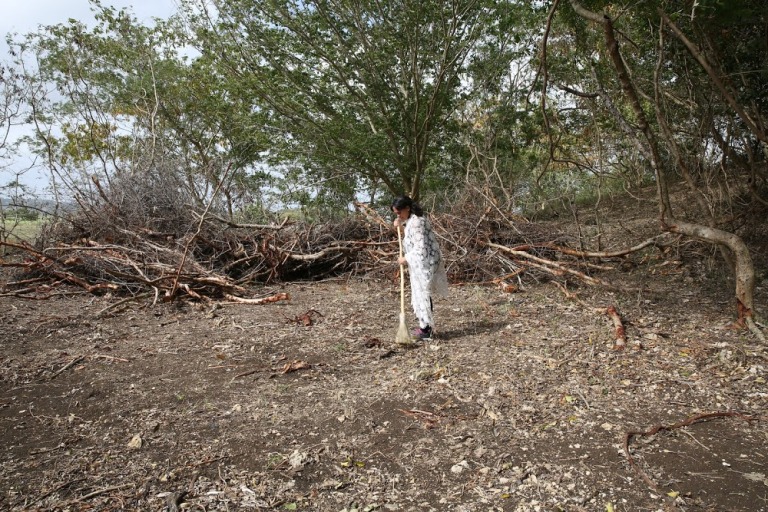 Annalee Davis (Barbados) recently published an intriguing piece, “The Dark Domain,” in The Forager. By way of introduction, this is how the editor, Deepa Bhasthi, describes the current issue:

“[. . .] For a change, we assigned a theme for an issue. We called it Passage and invited our contributors to interpret it as they pleased. To me, it was also the word ‘transition’. It was all its synonyms: change, move, transformation, conversion, adaptation, adjustment, alteration, changeover, metamorphosis; shift, switch, jump, leap, progression, progress, gradation, development, evolution; transfiguration, flux, mutation, transmutation, vicissitude. Passage in time, space or form, or in the movement of recipes or practices or memories, in history and in the present.”

Here is an excerpt of “The Dark Domain,” which provides a detailed context for her recent work, Sweeping the Fields:

Sweeping the Fields is an act of remembering and of cleansing; a contemporary gesture to history’s groan which acknowledges the possibility of an emerging post-plantation apothecary. The action of sweeping, documented through a suite of photographs, developed out of my walking the fields on Walkers dairy farm in Barbados, where I live and work.

Part of a 350-year old colonial history that links the Caribbean with the rest of world, Walkers was operational originally as a sugarcane plantation from the 1660s. It was formerly named Willoughby Plantation after the Eton-educated, English landowner and Governor of Barbados, William Willoughby, who developed the several-hundred-acre estate. The undulating landscape was carved into fields named: Big Mansion, Lower Orchard, Upper New Ground, Moor Door, Holy Field and Rab Land, all of which are still used today. The estate transitioned into a dairy farm three decades ago.

Barbados was where the British Empire began its involvement in the Caribbean and was considered their first “sugar island”. Sugar, the primary by-product of Saccharum officinarum – a grass domesticated in New Guinea – went on to conquer the world. Officinarum means ‘of the apothecaries shop’, and sugar, ironically, was first considered a medicine. The phrase “an apothecary without sugar” came to describe a state of utter helplessness.

The green liquid extracted from the plant was transformed into golden crystals, shipped to the British Empire and refined into white crystals. The expansion of the sugar economy is directly linked to the almost 400,000 enslaved who were exported to Barbados between the 17th and early 19th century to plant, harvest and refine sugar cane. The new British nobility who made their wealth from trading in sugar and enslaved bodies collected art, built libraries, banks and theatres, far away from the colonies. The powerful West Indian plantocracy exerted significant influence in both the House of Lords and Commons. [. . .]

[. . .] Inspired by the resurgent diversity of this emerging botanical archive asserting itself against a historically imperial landscape, Sweeping the Fields is not meant to conceal the dark secrets of the colonial era. Rather, the goal is to engage with the past through this particular site in interdisciplinary ways; reckon with the weight of a collective, traumatic past and act in ways which move against the grain of history while imagining the possibility of a healthier post-plantation reality and considering what that might look like or mean for contemporary society.

Annalee Davis is a visual artist who works with post-plantation economies and engages with the land where she lives. Her e-catalogue from her recent solo exhibition in Austin, Texas can be seen here: https://readymag.com/u65571097/503504/ and for information on a conversation she is part of at School of Visual Arts, New York on April 6th, 2017 visit: http://www.macp.sva.edu/local-address-barbados-newyork

[Photograph above by Helen Cammock.]