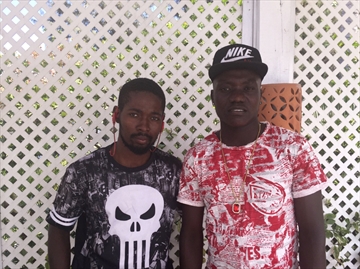 A report from the Waterloo Region Record.

The catchy song with the frenetic beat airs the dirty secret that everyone knows but no one talks about: “The brother is shacking up with mademoiselle but mademoiselle leaves him and takes an old man.”

Born in Haiti’s most notorious slum, the wildly popular hit song “Madan Papa” — loose translation from Creole, sugar baby or daddy’s girl — has set off an uncomfortable debate about a sad reality. This nation’s brutal economic environment is leading young women to enter into sexual relationships with older men in exchange for financial favours as a means of survival.

“The only desire of these young women is to find a man to rescue them out of the situation they are living,” said Jean-Philippe Macon, singer and composer of the song “Madan Papa,” who goes by the stage name Marinad 007. “It’s a case of need. Love doesn’t really exist between the two.”

It’s not a new story. The international dating site SeekingArrangement.com, for example, boasts more than 300,000 registered “babies” and “daddies” in search of relationships. But in Haiti, where strict cultural norms kept such situations hush-hush in the past, the open declaration in a song played by DJs and climbing the charts on radio marks a new level of desperation, said Michel Joseph, a journalist with Radio Television Caraibes, who has been tracking the phenomenon.

In a country marked by extreme poverty and inequality, “Madan Papa,” with its driving electronic dance beat, has become a social commentary, a musical reflection on the misery, sexual exploitation and erosion of values caused by years of economic and political instability.

“The economic crisis has eroded the dignity of people, put them in a bad position,” said Herold Toussaint, a sociologist and a vice rector at the State University of Haiti.

The sugar babies phenomenon, he added, is more urban than rural, and “is an expression, a consequence of the brutal situation of the country’s economy that has hit everyone and every social class,” but affected the poor and women the most.

“There are no jobs, no work in the country,” said Toussaint. “So it has become a defence against poverty for the women … What’s worse is that the women believe they won’t be anything if they don’t subscribe to this logic; they cannot get out of their economic situation if they don’t take this exit door.”

Neesha, who didn’t want her last name used, was 19 when she met her “Papa,” a 55-year-old widower who holds a position of privilege as a government official. Three years later, she says proudly, the two are still going strong.

“I don’t like to suffer. He doesn’t allow me to ask for anything; he gives me everything,” said the second-year accounting major, who doesn’t know how much her college tuition costs, because “Papa pays for it.”

“He’s already assured me that when I finish school, he will give me a job because he’s in power,” she said. “Unlike a brother who won’t give you anything, a Papa never lets you ask twice.”

Neesha said she was criticized by her friends for dating a man older than her 40-year-old mother. Her mother also disapproved — at first.

“Eventually, she had no choice but to accept him because she couldn’t meet my needs,” Neesha said. “Before him, there were a lot of things that I wanted for myself. I wanted to pursue my studies and my parents couldn’t pay for it. The same week we met, I explained it to him. He encouraged me and I was pursuing my accounting degree.”

Before Haiti’s recent presidential elections deepened an already existing economic crisis, the World Bank announced that the number of Haitians living in extreme poverty, or on less than $1 (U.S.) a day, had dropped significantly since 2012.

But with 70 per cent of the population either poor or vulnerable to falling into poverty, the international financial institution warned that reductions in foreign aid and increased political instability could reverse the gains.

Macon, who takes credit for coining the phrase Madan Papa during an exchange last year with a young woman who had entered into a sexual-financial relationship with an old man, said his neighbourhood is the epicentre of Haiti’s misery. In densely populated Cite Soleil, the country’s largest slum, the trash-heaped canals and shacks with corroding tin roofs offer little hope of future prospects.

But it was there, in a makeshift studio with little more than a mike and an outdated laptop, that he and his crew of other aspiring musicians mixed the beats that have made “Madan Papa” so popular thanks to its dance-friendly, defiant raboday beats. Raboday is a popular dance music emerging out of Haiti’s slums.

“While people are finding pleasure in the music, we also want them to hear the message,” said Macon, 23, who has been invited to perform the song at Miami’s Compas Festival in May.

His definition of a sugar baby is a young woman in her 20s often living a double life with “a brother” — a young, often unemployed boyfriend — and a “Papa,” a financially stable man old enough to be her father or grandfather, on the side.

Despite the song’s popularity, there has been backlash. Some of the women who see themselves reflected in the lyrics say it unfairly casts them as “gold diggers,” while others in Haiti have dismissed it as “a ghetto problem.” Jean Jameson Tintin, one of Macon’s collaborators, says the song is about finding a solution for a broader societal problem that, if not addressed, risks becoming something widely accepted.

After being in heavy rotation in the slums for months, the song finally burst into the mainstream late last year after motorcycle taxi and bus drivers began playing it. In January, it went viral on WhatsApp and social media after Joseph, the radio journalist, published a radio piece examining the phenomenon.

“I was surprised at how many women were willing to admit to being a Madan Papa,” said Joseph who was bombarded with sugar babies willing to share their stories after putting out a call on his Facebook page.

He said some of the fault lies in the breakdown of the family. “Parents have just resigned from their roles. They’ve turned a blind eye,” he said.

Toussaint, the sociologist said it’s not that Haitian parents don’t care or have lost their values. Rather, he said, the country’s savaged economy has weakened and demoralized families, and undermined parental authority.

“Parents are obliged to close their eyes, not because they agree but because they have no choice,” Toussaint said, noting that many of the sugar babies end up as the main breadwinner of the family.

Danielle Magloire, a human-rights activist and feminist, said the sugar babies phenomenon speaks to a larger crisis in Haiti, which is the sexual exploitation and sex trafficking of women and girls.

“You go to Petionville (in Port-au-Prince) and you see a bunch of young girls who are prostituting themselves. The misery has made things so grave that when you go downtown, for instance, and inquire about the price someone is paying for the sexual exchange, it’s mind-boggling.”

The price, she said, is often less than a dollar.

“When someone has sexual relations with someone for those kinds of prices, it certainly can’t resolve their economic problems,” Magloire said. “On the contrary, it just allows you to get something to eat, something to hold you over. And because there is no social protection in this country, it makes the situation worse. I call it a prostitution of misery.”

The Madan Papa relationships, she said, are just another form of prostitution.

Neesha doesn’t disagree that being a Madan Papa is a form of exploitation. She disagrees, however, that it’s a form of prostitution.

“They don’t support youth in this country so you are left with no choice but to seek out a Papa,” Neesha said.

One thought on “In Haiti, a hit song becomes social commentary”