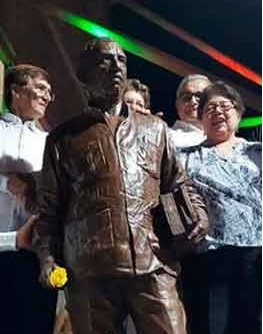 According to Prensa Latina, Cuban sculptor José Ramón Villa Soberón is giving the final touches to a sculpture of Colombian Nobel Prize in Literature Gabriel García Márquez. The sculpture will be unveiled revealed in Cuba in the context of the 26th edition of the International Book Fair, taking place in Havana from February 9 to 19, 2017.

The sculptor said that this event will provide the right environment, as the event also salutes García Márquez on what would have been his 90th birthday and the 50th anniversary of the publication of the novel One Hundred Years of Solitude [Cien años de soledad].

Prensa Latina writes that the piece already exists in Colombia at the Museum of the Caribbean in Barranquilla. The present ambassador of Colombia in Havana, Gustavo Bell, insisted on also locating a copy in Havana, in a city that the author loved to visit.

The sculpture of García Márquez—inspired by the moment when the prolific writer and journalist attended the Nobel Prize ceremony in Stockholm, Sweden—will be housed in the garden of the Lyceum of Arts and Literature of Havana, in the Marqués de Arcos Palace, in the historic center of the city.

Villa Soberón recalled that, at the Nobel Prize ceremony, many people were dressed in tailcoats and with their medals and decorations, while García Márquez attended dressed in a liquiliqui (a traditional costume of the Llanos area, a geographic region between Venezuela and Colombia). [. . .]

2 thoughts on “Unveiling of Gabriel García Márquez Sculpture in Cuba”