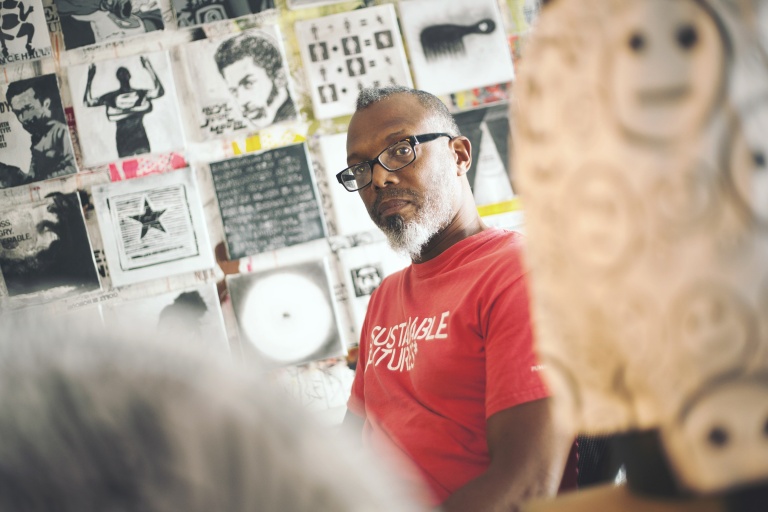 The title “Richard Mark Rawlins: ‘I want to redesign Trinidad and Tobago’s entire road sign system’” already gives us a taste of the creative energy revealed in this piece. Tom Banks, for Design Week’s “Insight” section (1 February 2017), introduces their readers to the exciting trajectory of Trinidadian designer Richard Mark Rawlins. Banks calls him “a seasoned creative, whose work is every bit as characterful as the island’s world-renowned Carnival,” in sum, “the irrepressible Richard Mark Rawlins.” Here are excerpts of his interview—a captivating read!

[. . .] My father and grandfather were both makers of things. My grandfather made Mas, (Carnival costumes), and objects out of coconut shells. He had an unholy obsession with making coconut sharks and Columbus’ ships: the Nina, Pinta and the Santa Maria. My dad drew, painted and made miniature battleships as well as dolls’ furniture and worlds. Yes, he created a whole miniature world beneath our home in Lange Park, Chaguanas. My wife, filmmaker Mariel Brown made a film about him: Smallman, the World My Father Made.

After O’levels, I moved to Toronto, did grade 13 and later a BA Geography at York University. On graduation I realised I had no immediate plans – or desire – to teach Geography or go on in the field, so after a little meltdown, and having fulfilled my parents’ desire for me to attain a university education, I promptly enrolled in George Brown College of Art, Science and Technology and studied Commercial Art, with the intention of going into advertising.

How did you get started in your field of expertise?

When I was a child I watched copious amounts of television. Bewitched was one of my favourite shows, not because of Samantha the Witch and the magic and all that other stuff, but because Darren – her husband – and his boss, Larry Tate, worked in advertising. They made it look so grand and easy. They’d be doing these presentations where they’d show illustrated layouts in marker and pencil, and they just seemed fantastic to me. I thought that was really cool and I wanted to be able to do that: make the cool layout, which made clients sit back and say, ‘Brilliant Larry, brilliant Darren… SOLD!’ So that was the start of design for me.

Studying Commercial Art at George Brown was a wonderful time. All my professors were artists/designers working in the field with active studios, and the campus was smack dab, downtown Toronto, in a hub of art galleries and studios. There was always something going on: Greg Hart cartoon film festivals, art shows, performances, Caribana. I was surrounded by exciting things and inspiration.

When I eventually returned to Trinidad in 1991, I got a job as the graphic designer for the National Aids Programme of Trinidad and Tobago. My boss at the time, Dr. Asha Kambon, was an inspiring person.  She had been actively involved in the Black Power Movement in Trinidad, and was an activist, so in-between schooling me on black identity and national class struggles in Trinidad, I was designing ‘awareness communication material’ in the fight against AIDS. [. . .]