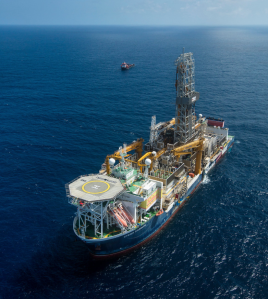 A report by Clifford Krauss for the New York Times.

Guyana, the tiny English-speaking South American country, is poised to become the next big oil producer in the Western Hemisphere, attracting the attention and investment dollars of some of the biggest oil companies in the world.

This week, Exxon Mobil and Hess announced the successful drilling of a deepwater exploration well that may soon confirm that the seafloor beneath Guyana’s coastal waters contains one of the richest oil and natural gas discoveries in decades. Experts now estimate that one of its offshore fields alone, known as Liza, could contain 1.4 billion barrels of oil mixed with natural gas, comparable to some of the larger fields drilled in South America.

With a population of fewer than one million people, Guyana — Venezuela’s eastern neighbor on the continent’s north coast — would be able to export nearly all of the oil that it will begin producing, probably starting around 2020.

The company announcements came only days after the Guyanese government announced its intention to build a $500 million petroleum processing and service center on Crab Island, an enormous investment for one of the poorest countries in the region.

Early rough estimates by experts of how much recoverable oil Guyana could have range to more than four billion barrels, which at today’s prices would be worth more than $200 billion. But the country, which currently produces precious little energy, sorely needs pipelines and other support infrastructure to begin a major production and export effort.

“It’s not often that a country goes from 0 to 60 so fast like this,” said Matt Blomerth, head of Latin American Upstream Research for Wood Mackenzie, a consultancy firm. Industry excitement over Guyana was stirred by a widely distributed report on Friday by the firm that said, “Guyana is rapidly joining the ranks of serious oil and gas players.”

The discovery is one more indication that South America is becoming a critical supplier to world oil markets. Brazil and Colombia are already major producers, and Argentina took a big step in the same direction on Tuesday when Chevron and several other international oil companies pledged to invest at least $5 billion this year and billions more in the years to come in the shale field in Patagonia known as Vaca Muerta, or Dead Cow.

Neither Exxon Mobil nor Hess would estimate how much oil was found in a field called Payara, a few miles away from the well drilled by Exxon Mobil in the Liza field. More tests are to be done.

The Payara field is part of a block of 6.6 million acres that Exxon Mobil is exploring with Hess Guyana Exploration and CNOOC Nexen Petroleum Guyana, a Chinese-owned company.

“This important discovery further establishes the area as a significant exploration province,” Steve Greenlee, president of Exxon Mobil Exploration Company, said in a statement. John B. Hess, Hess’s chief executive, said, “We believe that the resources recently discovered are significant.”

With Exxon Mobil’s global fields aging and its new interests in Russia frozen by United States sanctions, the discoveries in Guyana have the potential to add significant reserves to the company’s holdings. Rex W. Tillerson, the former Exxon Mobil chief executive, was scheduled to travel to Guyana to meet with its president, David A. Granger, but the trip was canceled when he was nominated to become secretary of state.

But for Hess, which has much smaller reserves than Exxon Mobil, Guyana is a far bigger bet with bigger potential gains.

Hess has announced an aggressive $2.25 billion exploration and production budget for this year, an 18 percent increase from 2016. Of that, roughly $475 million will go to developing the fields in Guyana. Exxon Mobil has not reported what it will invest, but experts estimate the amount will easily surpass $500 million. The company has drilled five exploration wells off Guyana so far, only one of which was dry.

Exxon Mobil officials stressed that the Liza and Payara fields are close to each other but are separate reservoirs and not connected, suggesting there may be more fields in the vast, unexplored areas of Guyana’s offshore waters. “We are encouraged to find a second field that tells us that Liza was not a one-hit wonder,” Alan Jeffers, an Exxon Mobil spokesman, said.

Oil companies have explored only two of roughly 20 potential fields offshore, some of which are in waters claimed by Venezuela. Some analysts have compared Guyana’s potential to that of Angola, a member of the Organization of the Petroleum Exporting Countries that is the second-largest oil producer in sub-Saharan Africa after Nigeria.

The growing Guyana exploration effort is part of a slow global recovery of the oil industry, which was hobbled by a collapse in oil prices. After rising well above $100 a barrel in recent years, prices fell below $30 a year ago and now stand at just over $50.

Industrywide, exploration and production investments are expected to rise 3 percent this year over depressed 2016 levels, to roughly $450 billion. But with technological improvements and falling production costs in recent years, more oil can be produced at a lower expense.

In recent years, the State Department has been trying to prepare Guyana for its potential oil rush with a program that advises the government on how to draft environmental regulations, financial arrangements and other forms of oversight.

Environmentalists have cautioned that involvement with the Guyana project will create a conflict of interest for Mr. Tillerson should he be confirmed by the Senate. If he is confirmed, Mr. Tillerson has pledged to recuse himself from any decision that might affect Exxon Mobil for one year, and to consult with ethics officers at the State Department after that.