A report by Frances Taylor for BT.com.

The BBC crime drama is back on Thursday nights with its mixture of sunshine and murder.

Hit BBC crime drama Death in Paradise is back to warm us all up in January with a sixth series of murders, mystery and Caribbean sunshine.

Kris Marshall’s DI Humphrey and his love interest Martha Lloyd (Sally Bretton) are back at the centre of the drama on the fictional island of Saint Marie.

The upcoming series features a London-based two-part special, some very special guest stars and some of the island’s most complex cases ever.

We caught up with leading man Kris Marshall for his guide to series 6:

Where do we pick up at the start of series 6?

Martha was travelling around the Caribbean and South America when we first came across her at the end of series five, so she’s continuing on her travels but she’s decided to come back to spend some time with Humphrey to see if it goes anywhere. We pick up with her imminent arrival back on the island.

She doesn’t stay with him, but she comes back to the island to see if there’s any future, any spark, there. Humphrey being Humphrey the path of true love is never straightforward. There’s a lot of ups and downs and obviously I won’t tell you exactly what happens, but it’s typical Humphrey.

What is the secret of Death in Paradise’s enduring success? 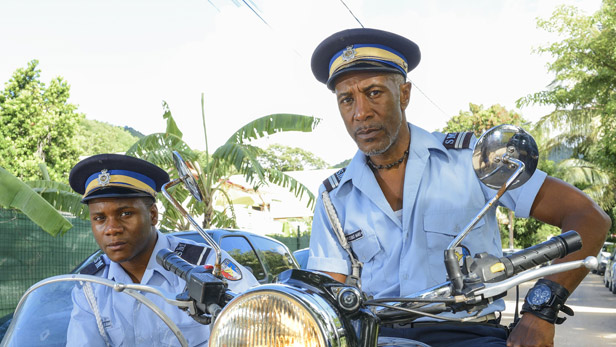 It gently pokes fun at Agatha Christie and all of those genres, and that’s what we do do. People amuse me when they say ‘Is this supposed to be a comedy?’ ‘Er, yes’.

We play with the genre, but in particular this series we really do. The denouement in episode three is particularly different than the normal way of doing things. The crimes in particular are often very different. It’s my favourite of the four series that I’ve done. By far.

The show has a two-part special in London – how did you find switching the wet and windy UK?

We were actually only shooting in London for 5-6 days. We shot a lot of the interiors in London in the Caribbean. So if you ever see any of us inside looking very hot in cold, miserable London that’s why!

My fellow cast members have to don things like gloves, hats and it was most interesting for me to see them struggle in the Caribbean heat wearing that garb.

Could there be more episodes abroad?

When I joined this show it was a very popular show on the BBC, don’t get me wrong, but it didn’t have the global appeal it has now and it’s been really interesting to see how it’s grown over the last four years.

I remember last year we had some Austrians chasing us as we were filming in the police car. And we’ve had Americans, Australians, Germans, Swiss…crazy, crazy, crazy.

You get spotted when you’re on holiday now then…

The weirdest one is France because the show is very popular in France now. I think it’s the most popular show on the channel that it’s on. It’s the biggest show they’ve ever had. The French are usually very lassaiz-faire about that sort of thing, and I’ve definitely noticed a change in France of people staring a bit more.

What can you tell us about this year’s guest stars?

As ever, we’re very lucky with getting some great guest stars. We have Ardal O’Hanlon who I’m a big fan of and have been since my student days.  You become a bit like a travel rep, you know? You tick them in on their holiday and then I welcome them to paradise. The beach is there, the bar is over there, enjoy yourself. And then a week later they’re gone. And then the next bus load come in!

Death in Paradise airs on Thursdays at 9pm on BBC One. Missed an episode? Watch on BBC iPlayer and BT TV Catch-Up.