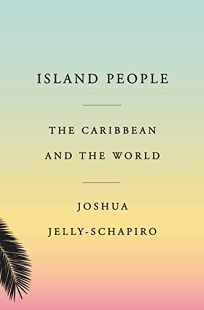 Many thanks to Peter Jordens for following up on our previous post on Joshua Jelly-Schapiro’s Island People: The Caribbean and the World (Knopf, 2016). Here are excerpts of a review by Tom Gjelten (The New York Times, 1 December 2016)—correspondent for NPR News and author of Bacardi and the Long Fight for Cuba (2009) and see links to other reviews below:

Those of us who were taught stories of heroic colonizers and conquered frontiers in North America may think our forefathers defined the New World. But another corner of our hemisphere may have the stronger claim. In the Caribbean, African and European peoples mixed in such numbers and circumstances as to produce creole cultures unlike anything seen anywhere before.

[. . .] Over three centuries, as many as six million slaves from West Africa arrived in the Caribbean, more than 10 times the number who were settled in what became the United States. The Afro-Caribbean experience was thus able to dominate in a way that African-American life, segregated and oppressed, never could have. Finding creative expression under the influence of and in opposition to white rule, the island people of the Caribbean by the 20th century became renowned for the originality of their music, literature and revolutionary politics.

Jelly-Schapiro, a white kid who grew up in New England with Bob Marley posters on his bedroom wall, began traveling around the Caribbean as a Yale undergraduate. “Island People” is the product of more than a dozen years of extended visits to the region, and Jelly-Schapiro’s writing reflects an extraordinary intimacy with his subject. In Cuba, he got around by hitchhiking, just as ordinary Cubans do. In Haiti, he accompanied the women who crowd onto small cargo ships with their sacks of fruits and vegetables. “I curled up as best I could with my fellow passengers, against a sack of what felt like mangoes,” he writes.

[. . .] But Jelly-Schapiro spends as much time in libraries as in music venues, and among the characters who figure large in his book are the writers and political theorists who have given intellectual voice to the Caribbean, from Frantz Fanon to C.L.R. James, the socialist historian of Trinidad and Jelly-Schapiro’s “first big intellectual crush.” His itinerary is dictated by the natural desire to explore “any place that features in the biography of someone you admire.” In Jamaica, he makes his way to St. Ann’s Parish, home to Marcus Garvey and Bob Marley and (part-time) Harry Belafonte. “This out-of-the-way parish,” he writes, “birthed not one but three totemic figures in the great 20th-century story of black freedom.”

Here are other reviews of Island People:

One thought on “Tom Gjelten Reviews “Island People: The Caribbean and the World” ”