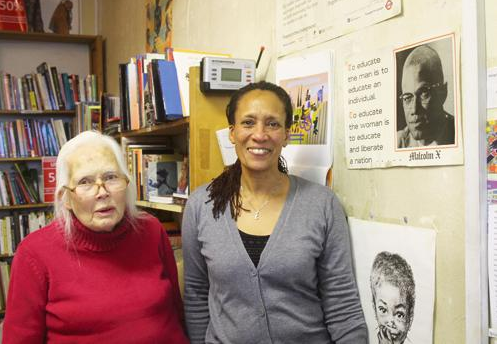 A report by Koos Couvée for the Islington Tribune.

THE iconic Afro-Caribbean bookshop, New Beacon Books, has announced it is closing on the eve of its 50th anniversary.

The store, in Stroud Green Road, Finsbury Park, was founded in 1966 by the late poet, essayist, political activist and publisher John La Rose and his partner Sarah White, and previously had also been a publishing arm specialising in black British, Caribbean, African, African-American and Asian literature.

It became an important hub for black political activity in the 1970s, 80s and 90s, and in 1991 the George Padmore Institute, an Afro-Caribbean archive chronicling the political, literary and cultural history of black Britain, was founded above the shop.

Speaking to the Tribune this week, Ms White said the realities of the book market, particularly the growth of online sellers such as Amazon, have made it difficult for independent book stores to survive. But she insisted that, while the retail operation is closing, it merely represents a new era in the history of New Beacon, which owns the building and will not have to move.

“At the moment it’s all up in the air and very exciting,” she said. “We don’t know exactly what the future of the shop will be but we will keep our presence here and we will keep the ethos.

“We will still be hosting events and, while we are facing up to reality, we have a future ahead of us.”

The bookshop started operating from the Hornsey Lane bedsit the couple lived in, before moving to its current premises in Stroud Green Road in 1973.

• Tomorrow (Saturday), two events are being held to celebrate the anniversary at the British Library in Euston. Changing Britannia: Through the Arts and Activism, a talk with Professor Gus John, and A Meeting of the Continents International Poetry Night hosted by the renowned Jamaican-born dub poet Linton Kwesi Johnson.

There will be a period of stock clearance with book events and special sales.

The George Padmore Institute will continue its archival work and hosting of events.