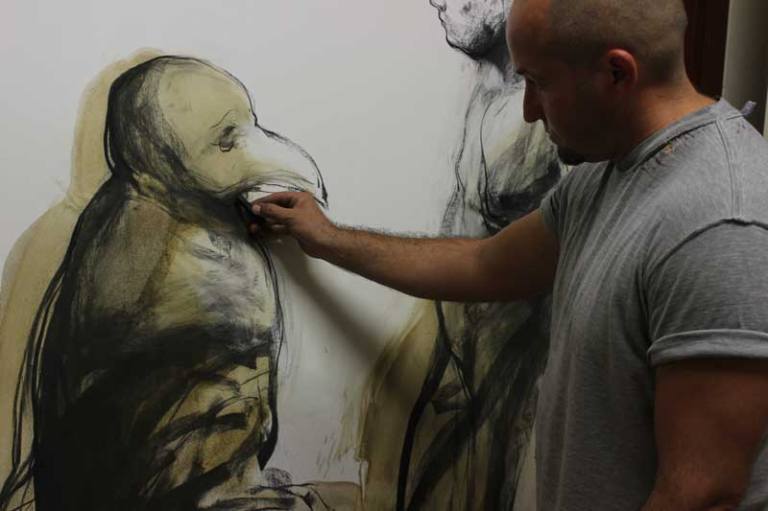 A report by Maya Quiroga for the Havana Times.

Octavio Irving Hernandez Jimenez is a Cuban artist who enjoys great national and international acclaim. He has worked as a cultural promoter, teacher and art methodologist. He has taken part in over 40 group exhibitions and has unveiled eight personal displays.

Irving graduated from the San Alejandro Academy of Fine Arts in 2000 and then from the Superior Art Institute in 2006. We spoke to today’s director of the Experimental Graphic Art Studio in Old Havana about the present and future of this art form in Cuba.

HT: In 2007, you won the Young Print Award which Casa de las Americas had been funding since 1987. This competition, which was directed at promoting the work of Latin American and Caribbean engravers under the age of 35, unfortunately no longer exists. How much did the Young Print Award contribute towards your professional career?

Octavio Irving: It was very important, as it was one of the competitions that gave artists in the Caribbean and Latin American region the most recognition. Ever since the exhibition I held at Casa de las Americas in 2009, many experts and institutions responsible for promoting the arts have begun to take my work into account.

Around that same time, Cuba’s Union of Writers and Artists (UNEAC) began to grow immensely based on the proposal that they would accept a member in every department as recognition for their work. I entered the Union in the engravings department. Two years later, I began to oversee this department at UNEAC and then I suggested the need to rescue engraving competitions, because most of this department’s members were the artists who are now working here at the workshop.

HT: So you decided to resume the National Engraving Meeting.

OI: The last edition was held in 2007. Three years later, I set out to rework all of the Meeting´s foundations. Of course, I consulted this with the National Council of Visual Arts (CNAP). Its President, Ruben del Valle, agreed with me and believed that it was both opportune and necessary that at least one competition remain alive. And so, we organized the 8th edition of the National Engraving Meeting in 2013.

HT: How did you come to manage the workshop?

OI: The workshop’s management was pushing me towards the role because I had formed part of the organizing committee at the UNEAC Congress, where the workshop’s work and future plans were discussed at a previous meeting, within the Engraving department. As a result, they proposed that I take over the management of the workshop and it’s been two years and a half now since I´ve taken this job on.

HT: Is there continuity between what the workshop was in its beginning and today?

OI: The reality of the workshop is quite different today, in tune with the new times. In fact, we are constantly talking with the National Council on Visual Arts about what the future of the workshop will be. Engraving has always been a group art, it continues to be so, but this reality has been changing over time.

Today, independent work has been consolidated a great deal. Artists now have their own spaces to create. This, along with the shortages of resources from the Ministry of Culture to be able to afford graphic creation at the workshop, has led us to the debate about whether the workshop will continue to be budgeted for.

I think that it will stop being a free space where artists come to create, without a previously planned outcome, and that it will drift towards a different practice, where the workshop will qualify and support creation via very specific, interesting or viable projects from a resources point of view.

HT: In spite of everything before, does the workshop continue to be a young creative space?

OI: There are many young artists who approach the workshop looking for legitimacy, visibility and support to produce their work and carry out their projects. They have always had an interest in this place, but already established artists in the engraving union – who are maybe 60 or 70 years old – continue to show an interest in taking park, not only in the meetings, but in the monthly program of exhibitions that we have put on throughout the year.

Parallel to this, when I discover a new talent, I try to get them off of the ground. For example, I got to know Marcel Molina Martinez’s work in Cienfuegos, on a tour I was doing as a visual arts methodologist. I’ve become very interested in his work since then. Luckily he won the grand prize at the last National Engraving Meeting.

HT: Do you have time for your own work among so many daily responsibilities?

OI: I have never abandoned my work as a visual artist. At the 12th edition of the Havana Biennial (2015), I put on a personal exhibition within the Zona Franca project, at the San Carlos de la Cabana Fort. In fact, some of my environmental and utility sculptures were chosen to form part of a public intervention project in outdoor and indoor physical spaces in fashion stores in Madrid.

One thought on “New Times Are Coming for Cuban Engravers”