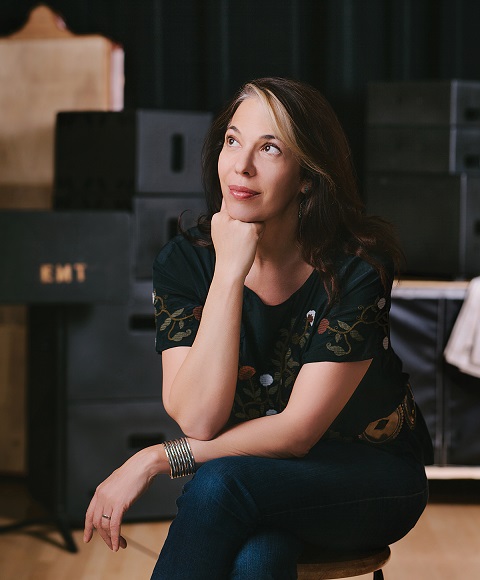 The award-winning Cuban-American playwright struggled to care for her parents in their final years. Patti Hartigan (Boston Magazine) writes that “Her resulting play might be her most profound work yet.” Her new play, Mala, will be staged at ArtsEmerson (219 Tremont Street, Boston, Massachusetts) in November. Here are excerpts:

[. . .] In 2011 Lopez went to Cuba, her parents’ homeland, on a humanitarian mission with the Friends of Caritas Cubana, a Cambridge-based nonprofit. While there, she took a taxi to her parents’ old neighborhood.

On a whim, she approached an elderly woman and asked about her family. That woman was Miranda, who had grown up with Lopez’s mother and had saved dozens of photos. “You make a connection, a bond that is instantaneous and permanent,” says the playwright, who has been back to the island twice, once with her daughter.

She then holds up a sepia photo of her parents, Manuel Lopez and Panchita Isidro. They left Cuba in 1959 after Fidel Castro took over—and never returned. But for Lopez, who grew up in Bedford studying the American Revolution in school and hearing about the Cuban Revolution at home, the trip to the island was a long-awaited homecoming. The story of that chance encounter received a shout-out from President Barack Obama in March during his historic speech in Havana. For Lopez, it speaks to who she is, where she came from, and where she’s headed. Her father passed away in 2014 and her mother died a year later. They remain on her mind, especially now as she is about to debut her new solo show, Mala, a bracingly funny and unsentimental account of caring for her parents during their final years.

The play makes its world premiere at ArtsEmerson this month, and it represents a daring departure for Lopez, who began her career as an actress and has since become an award-winning playwright whose works have been performed in regional theaters here and nationwide (Lopez is the Andrew W. Mellon Foundation Playwright in Residence at the Huntington Theatre Company). Her work is eclectic: Some plays focus on her Cuban-American heritage, but she’s also written about subjects ranging from music to mathematics, evolution to revolution. “Every work of art is about ‘Why are we here?’ and ‘What do we do?’” Lopez says. A common theme is about losing one’s home, and several plays attempt to strip away the stereotype of the Cuban-American woman. Her work is laced with humor while aiming to reveal universalities. It’s truthful, with an edge.

Lopez’s emergence as a playwright over the past 18 years has mirrored a broader transformation in Boston’s theater community. When she started out, ArtsEmerson didn’t exist and the Huntington didn’t hire local actors, much less produce local plays. In the 1990s, it was rare for a local playwright to receive a production here—and if one did, it was often in a small, dusty theater, seen by family and friends. Today, the city boasts new performance spaces, more midsize theater companies doing original productions, and more opportunities for kids starting out.

If Mala is successful, it will mean another step forward for Lopez and, by extension, the local theater scene. While ArtsEmerson is focused on the play’s Boston run, it’s building the show to be a touring production. Lopez, whose work has been produced in cities such as Miami, Chicago, and Portland, Oregon, has never had a commercial production in New York. This play could speak to the national theater’s core audience—baby boomers with aging parents and senior citizens who know that death is the coming attraction. For all involved, it’s new territory, a leap of faith. And it can be terrifying. [. . .]