A report by Aislinn Sarnacki for the Bangor Daily News.

A great blue heron in Palmyra, Maine, was outfitted with a high-tech GPS transmitter in June, and for months, state biologists and interested members of the public tracked the bird online as it moved among Maine wetlands, feeding throughout the summer. Then about a month and a half ago the bird nicknamed “Nokomis” fell off the map.

Researchers believe the bird’s long feathers had covered its transmitter, blocking the sun from the solar battery. Without power, the device couldn’t store or relay data.

“It’s a tricky thing,” Maine wildlife biologist Danielle D’Auria, leader of the Heron Observation Network of Maine, said. “In order to prevent that, you might need to have a larger transmitter, one the feathers won’t cover. But you don’t want a bigger object on their back because it might influence their movements.”

Then, on Oct. 20, the transmitter turned back on.

Sometime during the 1½ months Nokomis had been offline, the bird had flown from Maine to Haiti.

This is the first year Maine has tracked the movement of great blue herons by GPS transmitters. In June, biologists from the Maine Department of Inland Fisheries and Wildlife worked with several Maine schools to safely capture and outfit five great blue herons, including Nokomis, with GPS transmitters that essentially fasten to the birds like backpacks.

This project was a part of an ongoing effort by the DIF&W to learn more about the state’s great blue heron population. And this fall, when the five birds migrated south, biologists weren’t sure what to expect. 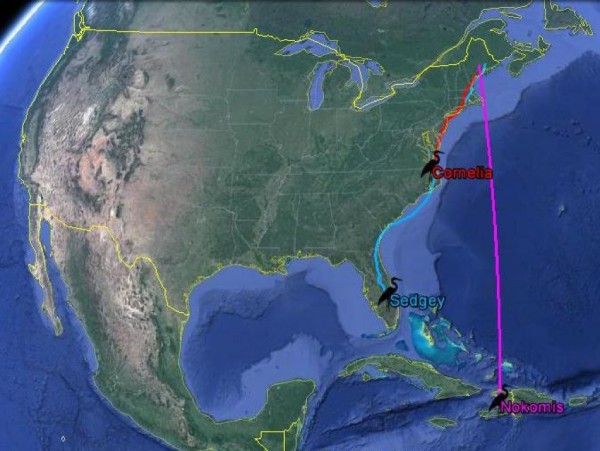 “There’s limited data out there,” D’Auria said, mentioning some data collected in the 1940s on the movement of just two great blue herons. “We were suspecting they might so as far south as Chesapeake Bay or maybe down to the North Carolina and South Carolina coast, but otherwise we didn’t really have a great idea of where our birds would end up.”

One reason little work has been done to track great blue herons in the past is because a lot of bird tagging for colonial wading birds is done on nestlings. But great blue heron nests, often built high in dead trees, are hard for researchers to access.

“Not many people want to climb a dead tree,” D’Auria said.

For this project, however, DIF&W biologists tagged only adult herons with the assistance of teachers and students from several Maine schools. They also worked with researchers John Brzoad from Lenoir-Rhyne University and Alan Maccarone from Friends University, who have been using these transmitters since 2013 and have paired nearly 20 birds — great egrets and great blue herons — with school systems in five states so far.

In Maine, to help the DIF&W with the project, students and teachers set and checked minnow traps, identified and measured the baitfish caught and placed the baitfish into a bait bin in order to get a great blue heron to regularly feed from it. They also used game cameras to photograph the bait bins.

After the heron became accustomed to feeding from the bin, DIF&W biologists set out an array of modified foothold traps near the bin to capture the heron as researchers watched from a nearby blind. Once trapped, each heron was quickly retrieved by researchers and a hood was placed over the bird’s eyes to help keep it calm. Researchers then took measurements and a blood sample, and the bird was outfitted with a transmitter before being released.

“One of the big aspects of this project is trying to connect schools to every aspect of it,” D’Auria said. “We did that with our field work this past spring, getting schools out to help identify where the foraging herons were and helping us bait them to specific spots so we could trap them. And we’re hoping now to have as many schools as possible involved in using the data generated by the transmitters.”

The GPS transmitters, which collect 288 GPS points and 360 behavioral tracings every 24 hours, were purchased with a grant from the Maine Outdoor Heritage Fund and are expected to provide years of data for each tagged heron. This technology transmits GPS locations via cellphone network to an open source website, movebank.org. The public can go online and view the birds’ movements on an interactive map on the internet or through a free mobile application called Animal Tracker. Users can also download the data to view on Google Earth, Excel or ARcGIS.

“It’s a very exciting thing to be able to discover things along the way,” D’Auria said. “We’re kind of learning at the same time that the public is learning.”

— “Nokomis” is a female trapped in Palmyra and adopted by Nokomis Regional High School in Newport. Her transmitter temporarily stopped transmitting data for a month and a half because of low battery voltage, likely because the solar-powered transmitter was covered by her feathers and was not charging. The transmitter turned on again on Oct. 20 to show she had flown all the way to Haiti to overwinter.

— “Sedgey” is a male heron that was trapped in Orrington and adopted by Center Drive School in Orrington. The bird was named after the stream on which it was trapped: the Sedgeunkedunk Stream. During Tropical Storm Hermine at the beginning of September, he flew to Florida. Along the way, he stopped in Massachusetts before completing a 29-hour nonstop flight to southern Georgia. He then made his way to an agricultural area just north of Lake Okeechobee in Florida, where he has been since Sept. 6.

— “Cornelia” is a female trapped at the New Gloucester Fish Hatchery and adopted by the Gray-New Gloucester High School. She had gone into a fish rearing raceway at the hatchery, making her an easy capture with a long-handled net. Cornelia left Maine on Sept. 23 to fly to North Carolina. Along the way, she stopped every few hours to spend three to seven hours in New Hampshire, Massachusetts and New Jersey. She then flew to Virginia, where biologists initially thought she would settle for the winter, but after a few days, she moved on to North Carolina.

— “Snark” is a male heron that was trapped in Orrington and adopted by Haworth Academic Center in Bangor. The students named him after a poem they’d recently read: “Hunting of the Snark” by Lewis Carroll. Like Nokomis, his solar-powered transmitter has stopped transmitting data, likely because it is covered by feathers and therefore not able to charge. Biologists expect the batteries in the transmitters will recharge and reveal the bird’s location after the birds molt these feathers.

— “Mellow” is a female trapped at Pine Ponds on Orono Land Trust property and adopted by Old Town High School. Her transmitter has stopped transmitting data, just like Snark’s, and is expected to recharge when she molts.

For information on the Heron Tracking Project, including directions on how to follow the tagged herons and resources for educators interested in using the data in their classrooms, visit maine.gov/wordpress/ifwheron/tracking-project.

3 thoughts on “Biologists lose track of Maine great blue heron, then find it in Haiti”