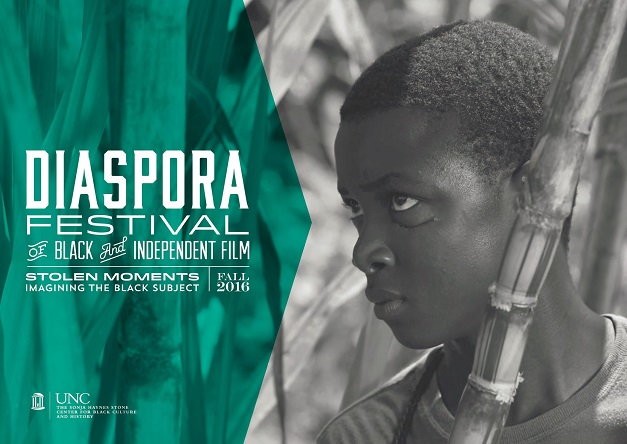 The Stone Center for Black Culture and History at University of North Carolina at Chapel Hill presents the 2016 Diaspora Festival of Black and Independent Film on October 4, October 11-15, 2016. This year’s theme is “Stolen Moments…Imagining the Black Subject,” with films from across the diaspora including the United States, Niger, Haiti, Jamaica, Brazil, Trinidad and Tobago, France, Angola, and Cuba. All screenings are free and open to the public and will take place at the Stone Center (150 South Road, Chapel Hill, North Carolina, UNC Campus).

The Festival officially opened on October 4 at 7:00pm with a screening of Dialogo con mi abuela [Dialogue with my grandmother], which was followed by a discussion with the film’s director, acclaimed Cuban filmmaker Gloria Rolando. [Also see our previous post on the documentary at https://repeatingislands.com/2016/04/23/new-film-gloria-rolandos-dialogo-con-mi-abuela/].

Films will be screened 7:00pm-10:00pm simultaneously in the Stone Center Hitchcock room and Auditorium Tuesday-Friday and on Saturday screenings from earlier in the week will be repeated from 10:00am-10:00pm (with a break for lunch).

October 11 (7pm-10pm): Across the Tracks, The Youth, Lost Boy, Nan Lakou Karnival, About That, Vole Vole Tristesse, In a Perfect World, Invisible Heroes

Please visit www.stonecenter.unc.edu/filmfest2016 for the film screening schedule and more information (or call 919-962-9001).

2 thoughts on “2016 Diaspora Festival of Black and Independent Film”