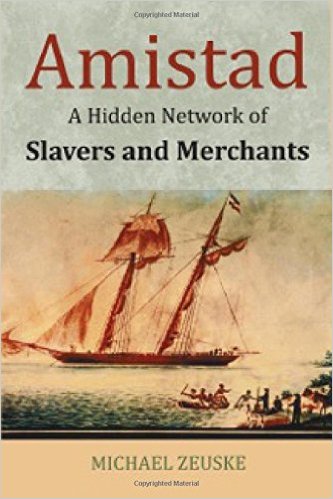 Michael Zeuske’s Amistad: A Hidden Network of Slavers and Merchants (translated by Steven Rendall) was published in 2015 by Markus Wiener Books; I am sorry to have missed its publication last year and I have immediately added it to my reading list. Marcus Rediker (author of The Amistad Rebellion: An Atlantic Odyssey of Slavery and Freedom) writes: “Michael Zeuske’s work as historical detective and master of the Cuban archives reveals a new and crucial dimension of both the much-storied Amistad case and the larger illegal Atlantic slave trade. This book shows a gifted historian at the height of his powers.”

Description: The 1839 Amistad revolt and the fate of the African slaves on board are well documented in books and in a blockbuster film. Michael Zeuske adds a new dimension to this history: the story of the people behind the Amistad. Based on his discovery — in previously unknown collections in Cuba and Spain — of the captain’s logbook, the cook’s notes, and the merchants’ ledgers and correspondence, he paints an eye-opening portrait of the slave trade between Africa and the Spanish Caribbean. After the British Empire abolished the slave trade in 1808 and enforced the ban with warships, slave traders in Africa, Spanish and Cuban ship captains and financiers, and international merchants created a hidden network based on forged documents and well-placed bribes. This network lasted until 1886 and ensnared hundreds of thousands of slaves smuggled from Africa to the Caribbean, mostly to Cuba, and tens of thousands of slaves who were smuggled from Cuba to the United States. Zeuske reveals these secrets for the first time and offers a new historical framework for our understanding of the Amistad story.

Michael Zeuske is professor of Iberian and Latin American History at the University of Cologne in Germany. After taking a doctorate at the University of Leipzig, he was appointed professor of Comparative History and Iberian-American History at the same university. In 1993, he was appointed to a chair at Cologne. He has been a visiting fellow at the University of Indiana, Bloomington, Yale University, New Haven, and the University of Michigan, Ann Arbor. He is one of the best-known scholars writing on Latin American history, especially the history of Cuba, Venezuela, and the Caribbean. He is the author of Simon Bolivar: History and Myth and numerous other books. His latest book is Handbuch Geschichte der Sklaverei. Eine Globalgeschichte von den Anfängen bis heute. (Handbook: History of Slavery: A Global History From the Beginnings Until Today.)

Steven Rendall is a freelance translator of more than sixty books from French and German. He has won the National Jewish Book Council’s Sandra Brand and Arik Weintraub Award and the Modern Language Association’s Scaglione Prize for his translations, and he was a finalist for the 2012 French-American Foundation translation award. He is also professor emeritus at the University of Oregon and editor emeritus of the journal Comparative Literature.

One thought on “New Books—“Amistad: A Hidden Network of Slavers and Merchants””