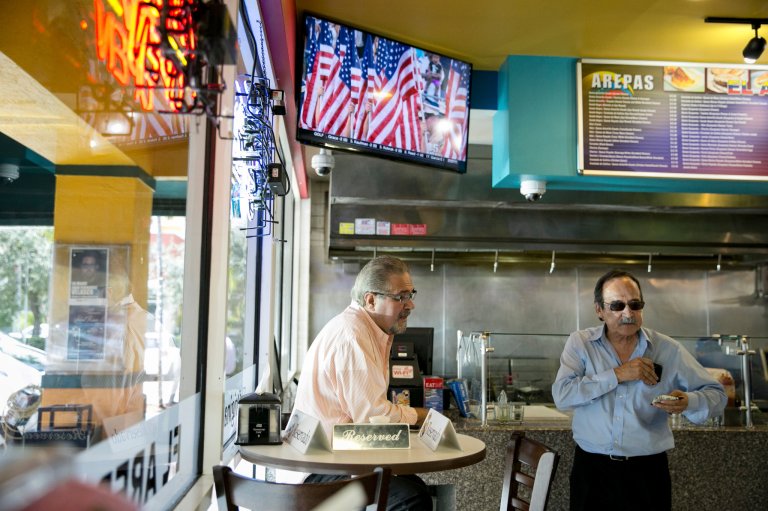 A report by Julia Preston and Lizette Alvarez for the New York Times.

For decades, being Latino in Florida almost always meant being Republican. Miami was the undisputed capital of Cuban exiles who had fled the Communist government — they were most of the state’s Latinos — and by the 1980s a large majority had registered with the Republican Party.

But a glimpse at the state voter rolls these days, where the names Samuel Del Valle, Maria Flores and Oswaldo Muñoz all appear as Democrats or independents, makes clear how much has changed in one of the nation’s most important swing states, one that will be important for Hillary Clinton and Donald J. Trump in November.

Back home, major political parties go by different names and their differences hinge on the island’s status as an American commonwealth: Should Puerto Rico seek statehood, remain a commonwealth or opt for independence from the United States? But here, he had a new choice to make.

“I chose Democrat,” said Mr. Del Valle, 34, who lives in St. Cloud, in the Orlando area, and who represents one big reason Florida’s Latinos are no longer a predictably Republican vote: the fast-growing Puerto Rican population.

When Ms. Flores, the American-born daughter of Cuban refugees, arrived at her new junior high school in Miami from New Orleans three decades ago, the city’s Cubanía — its Cuban sensibility — jolted her.

But she adapted quickly. Spanglish soon became her third language. She mastered the Cuban greeting — an air kiss doled out as abundantly as, well, air, even if you just met the person. Then, at 18, she participated in another Miami Cuban rite of passage: She registered to vote as a Republican.

“My parents were Republican, and they were happy with it,” Ms. Flores said in her living room, the smell of rice and beans floating in from the kitchen.

But in 2008, Ms. Flores, 43, a legal secretary and single mother, did what was once unthinkable. She re-registered as a Democrat, another sign Republican candidates can no longer count on Florida’s Latinos.

From his offices in Doral, a suburb of Miami, Mr. Muñoz, an entrepreneur from Venezuela, commands an empire of newspapers and websites that stretches across Florida to Panama and Spain. Mr. Muñoz, 64, is one of the Latin American immigrants who have contributed to the diversity and growth of Doral, which is now 80 percent Latino. Many, like Mr. Muñoz, arrived with means, while others started with nothing, drawn by the pull of American opportunity.

When he came here two decades ago, Doral was a warren of cargo warehouses. But as Venezuelans fled the economic depredations of a socialist president, Hugo Chávez, and his successor, Nicolás Maduro, Mr. Muñoz gained readers for his publications, which are known as El Venezolano. A restaurant serving arepas, Venezuela’s signature corn pancakes, became a social center of Doral.

In his columns, Mr. Muñoz rails against the leftist government that has reduced Venezuelans to hunger. But in regard to American politics, Mr. Muñoz, a naturalized citizen, is a registered independent who votes Democratic — yet another reason the vote in Florida may be so competitive.

“The Hispanic vote in Florida was reliably conservative and now is becoming reliably Democrat,” said Fernand R. Amandi, a pollster who has extensively surveyed Latinos in this crucial swing state whose 29 electoral votes are very much up for grabs, and could determine the outcome of the presidential race.

Still, much remains up in the air. Strong Latino candidates who are Republicans, like Senator Marco Rubio, still command loyal votes. And in Miami, Representative Carlos Curbelo, a Cuban-American Republican, and Joe Garcia, a Cuban-American Democrat, are in close duel in which Mr. Garcia is trying to retake the congressional seat Mr. Curbelo won from him two years ago.

There are few places in America where Latino voting power is as fluid as in Florida. Here are three snapshots.

MIAMI — Ms. Flores was never enamored of politics. But the more she heard her bosses, a group of lawyers, talk, the more she realized she had a kinship with Democrats on issues that affected her. As with so many people who switch parties, her decision was also driven by the top of the ticket, Barack Obama, in 2008.

“I was a single mom with two kids, and he represented change, and helping people like me, and equality,” she said.

She worried about getting laid off. She worried about how she could afford to get her son a car and pay for college. Yet, she said, the Republican Party didn’t speak to her. Instead, it fumed about abortion and religious rights and immigration. “It was ‘God says this and God says that,’” she said.

Her father and son, in different ways, are moving in similar directions.

Her father, Rolando Bocos, a former yacht builder who once served five years in a Cuban prison after the government charged his brother with carrying a weapon, is no Democrat. “I think they are Communists,” Mr. Bocos said. But now, he will not vote for Republicans, either. “It doesn’t matter Republican, Democrat, to me anymore,” said Mr. Bocos, 77. At his age, he said, “I’m only interested in Medicare and Social Security.” He said he would not vote this year.

Ms. Flores’s 21-year-old son, Alex, a student at Florida International University, drifted toward the Democrats because of social issues — gay rights (his godfather and some of his cousins are gay), religious tolerance, female empowerment. “I knew which side fit my moral compass,” he said. Last year, he became president of the university’s College Democrats.

Ms. Flores laughed at the unexpected turn in her life. “It’s funny that I came to Miami and became a Democrat.”

DORAL, Fla. — The transformation of Doral reflects the broader changes across South Florida. Cuban-Americans no longer dominate, but are now part of a Hispanic mix that includes a wave of immigrants from Latin America. Although many Venezuelans, Colombians and Brazilians have escaped leftist politics at home, once they become Americans they typically become Democrats.

Their voting power is limited, but growing. Many immigrants in Doral have not been here long enough to become naturalized, so there are only about 20,000 registered voters among 56,000 residents. But the trend away from Republican dominance is clear: 29 percent are Democrats and 46 percent are registered as independents. Only 24 percent are Republicans.

Mr. Muñoz said Cubans have welcomed Venezuelans to Miami, seeing in them a similar exile experience. The feeling is mutual. “We live close to their pain, so we understand it,” he said.

But there are differences. Venezuelans reject anything that reminds them of Mr. Chávez’s authoritarian rule, but they still favor the expansive government role in health care and education that Democrats support. Many Venezuelans are suspicious of the back-room politics they see in the entrenched Miami Republican establishment.

Unlike Cuban exiles, who benefit from special entry to the United States, Venezuelans — and other Latin immigrants — have no easy path. Some Doral residents are undocumented.

This year’s race for mayor of Doral reflects the changes. The incumbent, Luigi Boria, is a self-made businessman from Venezuela. A registered independent, he is a Republican in practice and a conservative Christian pastor whose priority has been to promote and bring order to the city’s frenetic growth.

He is facing a challenge from Sandra Ruiz, a Democrat and popular Mexican-American councilwoman who moved here years ago from San Diego. She zips around town in a car decorated with her photograph. Ms. Ruiz says Mr. Boria is too partial to developers and has failed to include lower-income residents in city programs.

Even though Mr. Boria is a compatriot, Mr. Muñoz and his newspapers are supporting Ms. Ruiz. Warily recalling Mr. Chavez’s multiterm rule in Venezuela, he thinks one term for Mr. Boria is enough.

But in Doral — as among Florida Latinos overall — the person pushing Latinos toward the Democrats this year is the Republican nominee, Mr. Trump. The owner of a golf course here, Mr. Trump persuaded Doral to host the Miss Universe beauty pageant in January 2015. The taxpayers ended up paying $1.1 million to Mr. Trump’s organization, Mr. Boria confirmed. But the exposure was a boon to local businesses, and Mr. Boria proposed giving Mr. Trump a key to the city.

But when Mr. Trump began his campaign last year attacking Mexican immigrants as criminals, it cast a shadow on Doral. Ms. Ruiz was offended.

“I felt Doral lost the city’s entire investment the moment he opened his mouth regarding Hispanics,” Ms. Ruiz said.

The feeling of insult was heightened after Mr. Trump waged a relentless Twitter assault on Alicia Machado, a former Miss Universe who is Venezuelan, whose story was highlighted by Mrs. Clinton last week’s presidential debate. Mr. Trump called her “disgusting” because she had gained weight after her pageant victory.

In an interview in Mr. Muñoz’s publications, Ms. Machado, who became an American citizen this year, exhorted Latino voters to learn from her experience: “We can’t risk having such a violent, bad-tempered, macho person as Trump as our president.”

Mr. Muñoz explained that Mr. Trump, although a Republican, reminds him and many other Venezuelans of their leftist nemesis, Mr. Chávez. “It’s his arrogance, his intolerance, the way he insults people who disagree with him,” Mr. Muñoz said.

ST. CLOUD, Fla. — When Samuel Del Valle became a Democrat, he joined a huge influx of American citizens streaming into Central Florida — Puerto Ricans, who are helping reshape the party’s political identity. Their growing presence along the state’s Interstate 4 corridor is a chief reason Florida’s Latino vote has veered away from Republicans.

For Mr. Del Valle, a teacher and college graduate, the choice this election season is easy. He liked the Clintons. He also liked President Obama. He even liked Jeb Bush, but Mr. Bush dropped out of the race. Ultimately, though, he knew enough about the Democratic Party to know it spoke his language, he said.

“They are super on minorities, and women and gays,” said Mr. Del Valle as his wife, Verónica Rivera, unloaded boxes inside the small apartment they rented recently in St. Cloud. “They support the Arabs, the Indians, the Latinos — all of us are different and have different cultures.”

Despite the Latino firestorm over Mr. Trump and his talk of border walls, Mr. Del Valle says he finds traces of redemption in him.

“I like some Republican ideas,” he said. The party, he added, stands for patriotism, law and order, discipline in government and a strong military. These ideas are appealing to many Puerto Ricans who have confronted high murder rates and deep-rooted government corruption, but who also boast high levels of military service.

“Trump does mention things that are true,” Mr. Del Valle said. “It’s a big border and people are coming illegally.”

So far, though, that is not enough to sway Puerto Rican voters. Their growing alliance with Democrats is strongly rooted in the candidates’ words and attitudes, and the signals they send about whether Latinos are welcome here as equals.

“I see myself as a Latino who wants to contribute to the United States,” Mr. Del Valle said. “And the Democrats are saying things that I want to hear about Latinos.”

One thought on “Florida’s Changing Latino Population Veers From G.O.P.”