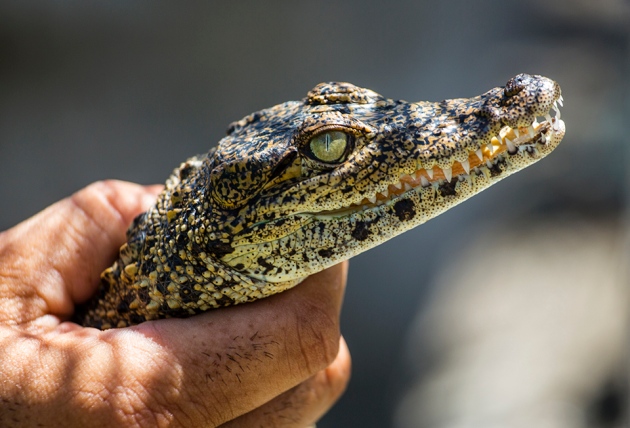 Dozens of spotted baby crocodiles sit as still as garden statues. Only their swivelling eyes betray their intense interest in passing visitors. Then, suddenly, the animals snap to life, and begin ambling around the Zapata Swamp Captive Breeding Farm in Cuba’s swampy Matanzas province.

“They’re cute as long as their mouths are closed,” says Etiam Pérez, an exotic-fauna researcher at the farm whose leg bears scars from an encounter with an adult crocodile.

The facility is the centrepiece of the Cuban government’s 56-year effort to save the critically endangered Cuban crocodile (Crocodylus rhombifer). In January, the programme released its first 100 captive-born animals into the wild. But that success has been tempered by genetic analyses that have revealed widespread interbreeding between wild Cuban crocodiles and the more resilient American crocodile (Crocodylus acutus).

The findings have prompted Cuban conservationists to rethink their ultimate goal. Should their breeding programme fight to maintain the genetic purity of the two species? Or should they let hybridization take its course, in the hope that an influx of genes from the hardy American crocodile will help the Cuban species to survive as its habitat shrinks and the climate changes? So far, science has not provided a clear answer. “We need to follow our instincts, our ideas, our judgement, and hope that future generations won’t criticize us,” says Pérez.

Former president Fidel Castro began the effort to breed and conserve the island’s reptiles in 1960, not long after the revolution that put him in power. Yet today, just a few thousand Cuban crocodiles remain in the wild. Logging and the expansion of agriculture have eaten away at their habitat, and demand for their valuable leather and meat is high. In Cuba, where the average monthly salary is about US$20, people run towards — not away from — crocodiles, Pérez says, despite the steep fines for killing them.

The animals are more curious and aggressive than other crocodile species, and can leap metres out of the water to catch tree-dwelling rodents called hutias, says George Amato, a conservation biologist at the American Museum of Natural History in New York City.

Cuban crocodiles can leap metres out of the water to catch their prey.

Cuban researchers have been slow to abandon the traditional method of classifying crocodiles by their head shape in favour of more precise genomic identification — in part because the country’s research centres lack modern genetic-research tools. Yoamel Milián-García, a biologist at the University of Havana, discovered that Cuban and American crocodiles were breeding with each other only after taking tissue samples to Canadian and US labs with next-generation DNA-sequencing technology.

His most recent analysis1 showed that half of the 227 wild Cuban crocodiles he tested were hybrids, compared with just 16% of 137 captive animals. This suggests that the animals’ interbreeding has accelerated, and that genetic analyses are now the only reliable way to distinguish between the species to study their behaviour.

Such situations are becoming common, as improved sequencing technologies reveal the extent to which species have interbred through history, says Evon Hekkala, a conservation geneticist at Fordham University in New York City. Her study2 of Egyptian crocodile mummies that are nearly 2,000 years old or more showed them to be very different from modern Nile crocodiles (Crocodylus niloticus), which are thought to be the descendants of multiple species that have probably died out. Hekkala is now studying fossilized crocodiles from the Caribbean to see what they reveal about the history of the various species there.

To Milián-García, the most important question is whether humans have played a part in the loss of the Cuban crocodile’s genetic identity. The Cuban and American species normally occupy different niches: the latter is more tolerant of salt water and nests in holes, whereas the former prefers fresh water and builds nests on mounds. Habitat destruction may be forcing them into the same ecological niche, which could produce hybrids ill-equipped to prosper in a changing ecosystem.

But an influx of genes from the salt-water-tolerant American crocodile could also help Cuban crocodiles to survive as Cuba’s rising seas encroach on freshwater rivers and lakes. “Do you want to be judgemental about a species getting by by accessing the genomic resources available to it by hybridization?” Hekkala asks.

The government farm released its first 100 captive-bred crocodiles in January.

While they grapple with such questions, Cuban researchers are using in-depth genetic studies to optimize their breeding programme. Last month, Milián-García, Pérez and their colleagues reported3 that female Cuban crocodiles can produce single clutches of eggs that contain DNA from multiple fathers. To maximize the amount of genetic diversity in the captive population, he says, the crocodile-breeding farm should allow each female to mate with several males.

Yet conservation research in Cuba remains challenging. Everything from buying fuel to sending samples to other countries requires a US government permit, a consequence of the decades-oldUS economic embargo against Cuba. “It’s the only place you can’t solve a problem with money,” Amato says.

Despite these difficulties, Cuba’s perennially underfunded scientists make do by forging international collaborations and dreaming up homemade solutions to equipment shortages.

And the Cuban government continues to make conservation a priority. In 2014, it closed off 500 hectares of the Zapata Swamp to future development, protecting land that had previously produced 15,000 cubic metres of milled lumber per year. Says Amato: “I give them really high marks.”