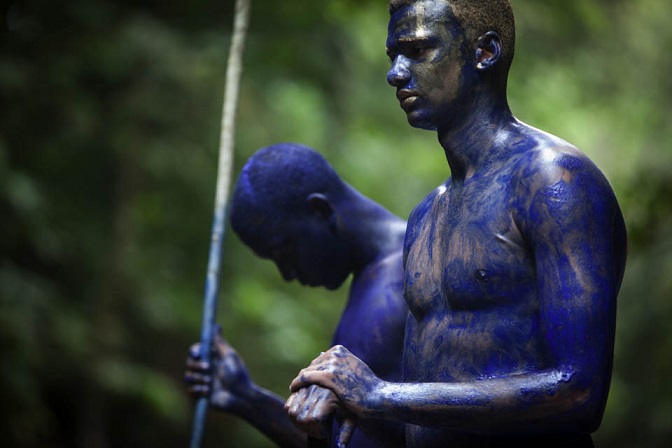 [Many thanks to Peter Jordens for bringing this item to our attention.] In this article, Romola Lucas (founder of the Caribbean Film Academy) interviews Bahamian film director Maria Govan about her newest feature film, Play the Devil in LargeUp, 27 July 2016). Here are excerpts:

On the heels of the world premiere of Bahamian director Maria Govan’s newest feature film, “Play the Devil,” at the 2016 LA Film Festival, we talked with her about making the picture and about being a Caribbean filmmaker. This is Maria’s second feature film. Her first, Rain, premiered at the Toronto International Film Festival in 2008, and went on to be widely screened and distributed.

Play the Devil tells the story of Gregory, a gifted student from a working-class family in Trinidad, favored to win a scholarship to medical school, who secretly wants to be a photographer, and who plays a Paramin Blue Devil, at Carnival. James, an older, wealthy businessman, seduces Gregory with his money and support of Gregory’s artistic inclinations. When James cannot accept Gregory’s boundaries, the relationship spirals into a fateful dance during the “Jab” (devil) play, on Carnival’s Monday night.

LargeUp: Why did you want to tell this story?

Maria Govan: One of the catalysts serving as an inspiration for this story was that of a teenaged boy in Trinidad, who committed suicide after his lover threatened to out him to his family. This was one of those stories that really broke my heart. I did not know this young man, I had just heard the story and I looked up his picture on Facebook, and I felt really devastated because I am a queer Caribbean person, who, in my early years, struggled with my queerness and with just being different, and had my own sort of self-destructive path, as result — so I was deeply impacted by this story.

At the time, I was working on a documentary of a Bahamian playwright, Winston Saunders, who had written a play named You Can Lead A Horse To Water. The play is inspired by a boy who murders his mother and he’s on trial. In one particular scene, he talks about how they tried to get a horse to drink and it wouldn’t, and they killed it. Then when I saw the blue devils of Paramin, this play came to mind along with the story of the kid suffering around his sexual orientation and somehow these stories collided in my mind, and I told Abigail [Hadeed, Maria’s partner and the film’s producer] I want to tell the story of a boy who plays a blue devil because the entire ritual was so stunning and cinematic. The idea and metaphor of it struck me personally.

I wrote the script in two weeks and it was hands down, the best first draft I’ve ever written. It was not something I had to search for or belabor. It really was a gift to me. And this is not my story. I’m not a black boy from Paramin, but I just listened to what was coming, and wrote it all down.

LU: How do you feel about screening the film for Caribbean audiences?

MG: I welcome showing the film to Caribbean audiences. I’m excited for the dialogue. I think this film will be a catalyst for a lot of different conversations. I think it’s a film people will walk out of the theater with feeling very differently about and will have a lot to say.

LU: What are your thoughts on the current state of filmmaking in the Caribbean?

MG: I think there’s an amazing wave building in the region and, collectively, the English-speaking Caribbean countries are working to support indigenous voices. It’s more difficult in some countries, but for example, there is the Trinidad + Tobago Film Festival, and the work Emily Upczak has done with the Film Mart was a tremendous gift to the Region. During the Film Mart last year, it was the first time, as a Caribbean person, that I felt so connected to the region at large. I felt like a Caribbean national, with brothers and sisters around me that have a lot of similarities. Our region is so rich and each country has its own unique identity and our stories, although similar, are really distinctive and different. The Bahamas and Trinidad are very different places, but because the world’s view of us is so superficial. People don’t really know the difference. With films people are going to start understanding that there is all this great texture, and history and layers to the Caribbean.