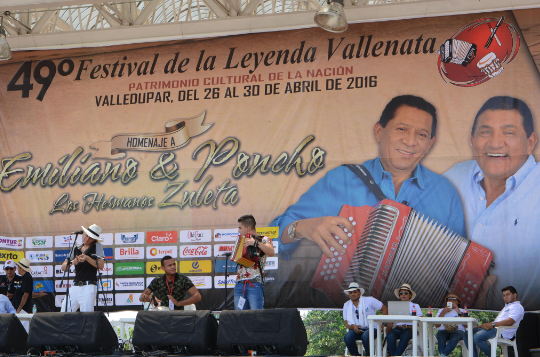 An article by Betto Arcos for WKMS.

Colombian writer Gabriel García Márquez once said that One Hundred Years of Solitude was a 400-page Vallenato: a traditional music of Colombia’s Caribbean coast. The songs are mini-epics, filled with local characters and poetry. It’s a style that stretches back 200 years and is still thriving today.

At high noon in Valledupar, the capital of Vallenato, a traditional trio takes the stage. The occasion is the Vallenato Festival, which has been held in the city that gives the music its name for almost half a century. Its goal is to promote the traditional elements of the style, which is played on three instruments: caja, or drum, guacharaca, or scraper, and the diatonic accordion.

In addition to a competition, the festival includes daily concerts held in a 25,000-seat amphitheater. Among the headliners this year was superstar singer Carlos Vives, who helped popularize Vallenato around the world in the early 1990s.

“For me, Vallenato is connected to the countryside, to the cattle rancher, to the farmer,” Vives says. “That’s Vallenato. And then there’s us, the new generation who have reinvented it. But when I talk about Vallenato, we have to remember the ‘minstrels.'”

The minstrels go back to the early 1800s, when troubadours traveled from town to town, singing songs about local and regional news.

“Back in the day, the news was spread through songs,” says Tomás Dario Gutiérrez, a Vallenato historian and composer. “News that today could be transmitted in a matter of seconds — for instance, an epidemic.”

In One Hundred Years of Solitude, one of the main characters learns of her mother’s death through a famous Vallenato accordionist named “Francisco el Hombre,” inspired by a real-life minstrel.

Gutiérrez says people may think García Márquez wrote about a fantasy world in his novel.

“No, no,” Gutierrez says. “He takes the history, the social and cultural reality of our people and runs it through the sieve of fantasy and creates that monumental work. Many times, the same phenomenon happens in Vallenato songs. For instance, the song called ‘The House in the Air’: ‘I’m going to make you a house in the air.’ It’s the same thing!”

The song tells the story of a man who wants to build a home for his daughter up in the air to protect her from unwanted suitors, so that only the one who can “reach that high” can win her hand.

Up until the late 1800s, Vallenato was played on indigenous Colombian flutes calledgaitas. When the accordion came to Colombia from Germany in the mid-1800s, it became the primary voice playing four distinct “airs” or rhythms: paseo, merengue, son and puya.

“To promote and support music that does not stray from the melodic and literary structures of traditional Vallenato,” Quintero says. “That said, I’m a firm believer that we have to evolve, we can’t restrict or stigmatize new musicians. We just have to make sure that they have all the necessary elements of traditional music and, based on that, create new work.”

The Vallenato Festival recognized accordionist Emiliano Zuleta and his brother, singer Poncho Zuleta, for their efforts to preserve the music.

“We must follow the rules and parameters of traditional Vallenato, to conserve its essence,” Zuleta says. “That’s the work we do and the recommendation we make to new generations, so they don’t distort the truth about Vallenato.”

“It’s also important that minstrels continue to thrive, like Emiliano Zuleta, the elder, or Luis Enrique Martinez or Carlos Huertas,” Vives says. “Composers that were born free of the recording industry — who were not born to make records, but to carry messages from town to town.”