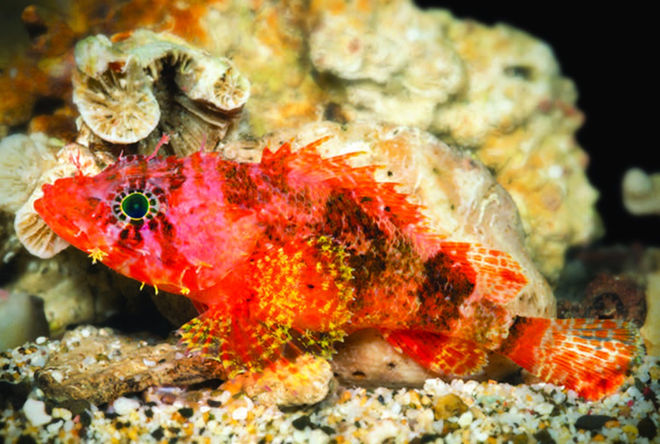 An article by Stephanie Pappas for Live Science.

A riotously colorful new species of scorpionfish has been found deep in the Caribbean near Curaçao.

The fish is orange-red, with splashes of yellow and pink decorating its fins and face. Its scientific name is Scorpaenodes barrybrowni, after nature photographer Barry Brown, who works with the Smithsonian Institution mission that discovered the deep-sea-living fish.

S. barrybrowni is a denizen of the rocky seafloor and underwater cliffs, spending its time between about 310 and 525 feet (95 to 160 meters) down. Researchers discovered the new species during the Deep Reef Observation Project (DROP), a Smithsonian Institution mission to explore reefs deeper than scuba divers can go. Researchers used a manned submersible, Curasub, to collect samples of scorpionfish from near the island of Curaçao and discovered that several were of a species never seen before.

“The 50- to 300-meter [160 to 980 feet] tropical ocean zone is poorly studied — too deep for conventional scuba and too shallow to be of much interest to really deep-diving submersibles,” Carole Baldwin, the lead scientist at DROP, said in a statement. “The Curasub is providing scientists with the technology needed to remedy this gap in our knowledge of Caribbean reef biodiversity.”

Scientists collected the new species with two hydraulic arms that anesthetize the fish and then bring them to the surface for study. They’ve dubbed their new find the stellate scorpionfish because of the colorful, starburst patterns on its fin and eye.

Genetic and anatomical analyses showed the new species to be separate from other western Atlantic scorpionfish such as Scorpaenodes caribbaeus and S. tredecimspinosus, Baldwin and her colleagues wrote in an article published online July 21 in the open-access journal ZooKeys. The fish are typically about 1.5 inches (37 millimeters) long and are the deepest-living Scorpaenodes fish ever discovered.

The colorful little reef fish is the ninth new fish discovered by the DROP mission, Baldwin and her colleagues wrote. Other discoveries include the green-eyed, yellow-skinned Godzilla goby (Varicus lacerta), and the tiny, iridescent Haptoclinus dropi.