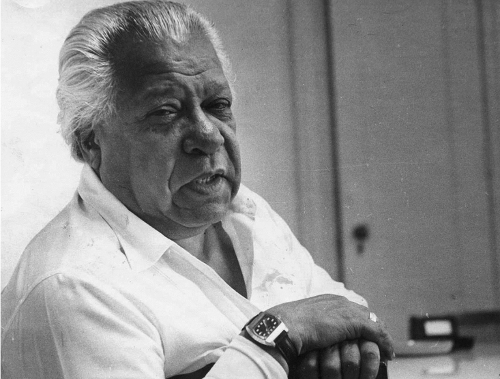 On the occasion of the 114th anniversary of the birth of Cuban poet Nicolás Guillén (July 10, 1902 – July 16, 1989), the book Presencia negra en la cultura cubana [The Black Presence in Cuban Culture] will be presented on July 13, 2016, so confirmed the Nicolás Guillén Foundation, as reported by Prensa Latina.

The publication contains some fifty lectures by a large group of specialists on the African footprint on Cuba’s particular features, said the publisher, Editorial Sensemayá. This publishing house was founded earlier in 2016 for the purpose of disseminating the work of Cuba’s National Poet, with an emphasis on his prose, according to its Director, Denia García.

With a circulation of more than 2,500 copies, the book will be available to the public after it has been presented at the Rubén Martínez Villena Hall of the National Union of Writers and Artists of Cuba. Sensemayá has also announced the launch of new publications based on works of Guillen, such as Buenos días Fidel and España. […] Nicolás Guillén’s body of work is voluminous; among his most famous works are Motivos de son (1930), West Indies, Ltd. (1934), La paloma de vuelo popular (1958) and Antología mayor (1964).

For the original article (in Spanish), go to http://www.prensa-latina.cu/index.php?option=com_content&task=view&idioma=1&id=5054701&Itemid=1.

One thought on “Book presentation to celebrate Nicolas Guillen’s Birthday”