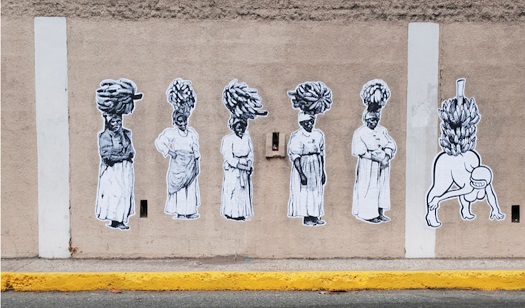 [Many thanks to Ebony G. Patterson for sharing the news.] Jamaican artist Leasho Johnson is the first artist to be selected for the Davidoff Art Initiative’s (DAI) new residency partnership program at Residency Unlimited (RU) in Brooklyn, New York.

Johnson is a multidisciplinary artist whose practice spans a wide range of formats and media, including ceramics, murals, mixed media, street art, graphic design, and found objects. He will be in residence at RU from September to November 2016, expanding a body of work that aims to redress the global lack of understanding of traditional Jamaican dancehall culture.

“Jamaican dancehall culture is vibrant, dynamic, and oftentimes controversial. It is relevant to contemporary Jamaican youth and informs political, social and racial views in Jamaica,” said Johnson in a statement. “My current work attempts to elucidate both the hidden wildness within this aspect of Jamaican culture, and my own place in society as a gay man from rural Jamaica.”

Johnson has created a series of original characters called “Pum-Pum” which serve as exaggerated reflections of the male and female roles in Jamaican dancehall culture. Using these characters, he “juxtaposes imagery grounded in traditional realism with that of stylistic cartoons to highlight the differences in the two styles,” according to the DAI.