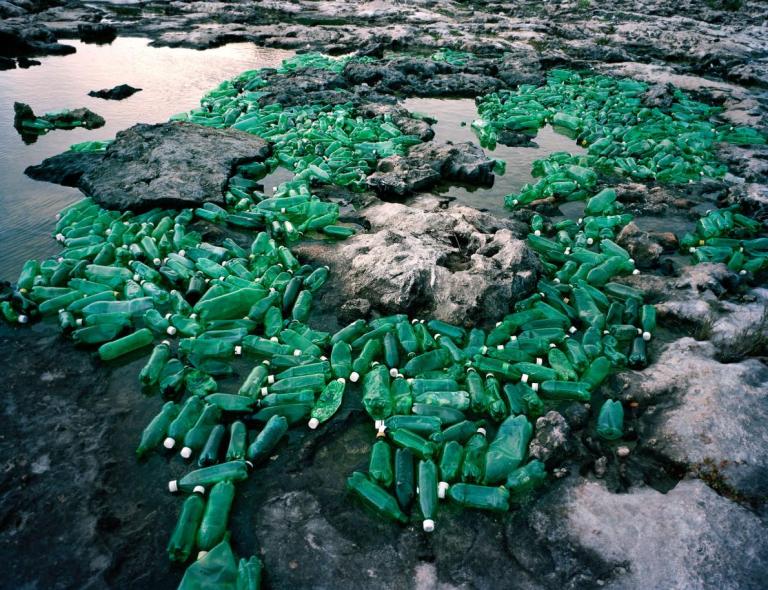 A gorgeous UNESCO World Heritage site has a serious problem with ocean trash, and artist Alejandro Durán wants to inspire us into action, Becky Harlan reports for National Geographic.

Imagine you’re taking a stroll along a sandy swath of beach. All you see is aqua ocean for miles. Then, suddenly, you stumble upon a “river” running red with plastic trash. You’d certainly stop to wonder. That’s all part of artist Alejandro Durán’s master plan—to pique your curiosity and then swoop in with a healthy dose of reality.

If your sandy stroll happened to take place in picturesque Sian Ka’an, a biosphere reserve and UNESCO World Heritage site on the eastern coast of Mexico’s Yucatán peninsula, a red plastic river and many other surreal encounters could be a reality. A coconut tree shedding skittle-colored fruit? Yep. Toothbrushes growing like reeds? You got it. If any of these sights inspired you to ask around, you’d learn that they were carefully constructed by Durán from the trash collected along Sian Ka’an’s shores.

Durán first discovered the reserve’s severe trash problems on a visit in 2010. “Seeing such a gorgeous stretch of the Earth covered in trash was shocking and saddening,” he says. It’s a protected area, but Durán explains that ocean currents and storm paths deliver trash from all over the world to Sian Ka’an’s shores. “I have identified products from 53 countries and territories on six continents thus far,” he says.

Because of the reserve’s isolation and lack of infrastructure, it’s more difficult to clean than nearby areas. “When it is cleaned,” he says, “more trash is guaranteed to arrive the next day. Cleaning the beach is quite literally a Sisyphean task.”

Redeeming the relentless trash became a passion project for Durán. On his first visit, inspired by the landscape (Sian Ka’an means “origin of the sky” in the Maya language), he collected and arranged blue garbage in front of the vivid Caribbean sky and sea.

Since then, he’s continued to use color as a concept in his installations. Many people even ask him if he paints the garbage. He doesn’t. He meticulously gathers and arranges the trash so that it echoes its surroundings and feels like a natural growth or organism. His hope is that the visual distinction between what is natural and what is synthetic begins to blur. After all, he says, “These synthetic objects are infiltrating our natural ecosystems.”

Each installation takes about ten days to create—from the collection to the construction to the careful photography. Sometimes Durán leaves the pieces up for much longer, in the hopes that they’ll spark something in passersby.

“When I first started the project I left a few pieces up for months. I thought that I would be fascinated if I found an installation like this in a deserted stretch of Caribbean paradise,” he says. “When I returned months later, I found that the installation was relatively untouched. Later on, I met someone who had seen the work and said that whoever had created the work was sending a strong message; she felt that the Earth was bleeding.”

Normally an artist would be thankful for a never-ending supply of free materials, but Durán doesn’t feel that way. “Every time I return to Sian Ka’an it seems that the problem grows worse,” he says, “It can definitely elicit a feeling of hopelessness, but it has also inspired a desire to do something about this situation and spawn change.”

Caling Durán an artist is only half the story. He also sees himself as an educator and a catalyst for change. “It is truly absurd that a plastic water bottle can be used to quench your thirst for a few minutes and then last for years, decades, even centuries, while destroying ecosystems and endangering life on our planet. I believe that the first step in creating change is education. Now we need to move on to action.”

Learn more about Alejandro Durán’s mission to turn ocean trash into art on his project website. You can also explore the trash Durán collected and see where each piece originated on this map. Follow Durán and his Washed Up Project on Instagram.

One thought on “This Is Not a Mirage: Colorful Art Installations That Delight, Then Horrify”