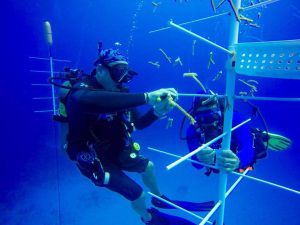 Cayman News Service reports that a project to grow new coral in local waters in an effort to replenish the increasingly depleted local reefs is doing well, according to experts working on the nurseries.

Reefs around the Cayman Islands have been impacted by over-fishing, coastal development and climate change issues, such as bleaching. Marine scientists say it will prove difficult to bring the islands’ reefs back to the health they enjoyed even twenty years ago but there is hope that the nurseries, in combination with other conservation projects, can help slow down the loss and maintain close to what we have.

According to a press release by local dive industry writer Adela White, just a few weeks after the ‘trees’ were installed in the ocean and fragments of coral attached in waters around Grand Cayman they are showing healthy signs of life and attracting fish.

Local diver operators Ocean Frontiers, Sunset House and Divetech are all gardening coral following approval by the Department of Environment to set up the nurseries, and DoE experts are overseeing the programmes.

“So far everything looks great. There has been zero mortality from the collected coral,” Lois Hatcher, who is managing the nursery for Ocean Frontiers, told the dive magazine. “We are doing weekly maintenance on the site and setting up a report for the Department of Environment. The fragments are being monitored for disease, photographed and measured. They already show visible growth after just a few weeks.”

The coral trees were set up in late April with the help of the Sea of Change Foundation, an ocean conservation non-profit that donated money, expertise and materials to construct the trees, made from plastic tubes. Experts from the Coral Restoration Foundation were brought in to help install the trees and train the dive operators how to manage the nurseries.

“Every year the Foundation picks a project that we believe will make a difference in saving our seas, and this year we picked Cayman’s coral nursery program,” said board member Jerry Beaty. “We’ve seen this method succeed in other places and because Cayman is such a prime dive destination, we want to do what we can to keep it that way.”

Each coral tree, which can hold about 100 coral fragments, is anchored to the sea bottom with rope and can float with the currents, even during storms and hurricanes. The coral fragments feed from the nutrient-rich currents and they grow. Cayman’s nurseries contain fast-growing Staghorn Corals. Nursery tenders clean and maintain the coral trees to find the strongest corals which will then be used to “seed” local reefs.