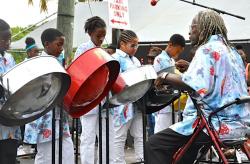 David Knight Jr. reports that St. John’s festival village, which has this year been dubbed “Varlackville” after the noted local family, opens on June 28, but last Saturday, the St. John Festival 2016 got off to a lively start with steel pan renditions of old carnival favorites and new pop songs in Franklin Powell Park in Cruz Bay for this year’s Pan-O-Rama steel band showcase. Here are excerpts from his June 5th article:

Ten bands made up of mostly middle and high school students claimed the park and waterfront for the evening to share their talents with residents and visitors, lending a “block party” atmosphere to Cruz Bay. “The students not only played, they performed,” said Liston “Matey” Sewer, director of two of the evening’s performing bands, the Bertha B. Boschulte Middle School Burning Blazers and the Joseph A. Gomez Elementary Pan Busters. Sewer said his bands had been practicing for the event since the beginning of the year and incorporated elements of showmanship into their performance, including crowd-pleasing tricks with their mallets.

[. . .] While the Pan Dragons had the clear hometown advantage, visiting bands from St. Thomas also pleased the crowd with their enthusiasm and gifts on the steel pan. [. . .] Wess Stars is a steel orchestra out of the St. Thomas public housing community Kerwin Terrace, according to Malone, who said it mostly plays with borrowed and refurbished instruments. [. . .]

One of the largest bands playing Saturday was the V.I. Superior Court Rising Stars. Instructor and arranger Leroi Simmonds said the band would be playing its St. Thomas Carnival 2016 repertoire for the evening, a set list including the single “Locked Away” by St. Thomas musical heroes Rock City. Simmonds said he enjoys the way music brings people together and causes many of life’s struggles to temporarily melt away.