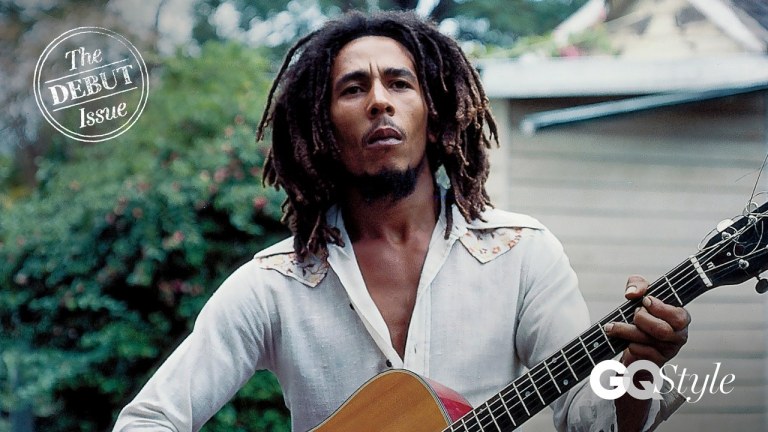 An article by Marlon James for Gentlemen’s Quarterly. Here’s an excerpt. Follow this link to the complete article.

Bob Marley brought reggae, Rastafarianism, and the singular culture of Jamaica to the world—and also managed to be the best-dressed rock star of the ’70s. Jamaican novelist Marlon James considers the real (and very stylish) soul behind the image.

I mean, you can’t help but wonder. When a black man—yes, a rock star, but still a black rock star from the so-called Third World—struts onstage in a way that makes a peacock seem bashful, in a brown leather vest and pants, tripping on ballsy, risking ridiculous but still coming off regal, prophetic, almost like the Lion of Judah he sang about, you gotta wonder, where did all that come from? The swagger, the attitude, the don’t-try-this-at-home fearlessness. Well, if you were Bob Marley, you picked it up from hanging out in the most fearful place you could think of: a graveyard.

In Jamaica even now, duppies (ghosts) are someserious rassclaat bizniz, so nobody treads into a cemetery lightly, not even in the daylight. Rewind, then, to the early 1960s, when Marley, Bunny Wailer, and Peter Tosh (already harmonizing as the Wailing Wailers) are under the visionary tutelage of Joe Higgs, one of reggae’s first true geniuses and a man with a nose for bringing out talent even in people who didn’t know they had it. As a test of their mettle, he wakes them up at 1:30 a.m., drags them off to the May Pen Cemetery, final resting place of many a rude boy, and dares them to put on the performance of their lives. Higgs’s mad logic was actually sound. If you could get through playing for the dead and the undead, you could stand up to anybody. Marley even got a classic song out of it, “Duppy Conqueror.”

By the time Marley moved from Nine Miles up in the St. Ann hills to Kingston in the late 1950s, eventually falling in with the Studio One crowd in the mid-’60s, he wasn’t yet a singer but already looked like a star. In his earliest photo, it’s almost all there: The hard stare, lips in a near grin. Attitude masking bashfulness, because Marley’s biggest secret was that he was actually shy. And of course the sharp blazer, maybe his only one, and the casual white shirt, rakishly open. It’s like looking at a photo of Joan Jett, or David Bowie, or Keith Richards as a kid: That thing, that star thing, is already there. Cool, but not yet with a groove.

And Studio One, near the dividing line between ghetto and good-life Kingston, popped out an assembly line of stars like a tropical Hitsville, though a better comparison might be Stax, just because of the raw, mercurial power of the up-and-coming superstars who paid their dues cutting tracks on wax. By 1964, Studio One was making hits and history, detonating ska on the cool kids in Kingston, the U.S., and the UK, then ushering in its slower aftershock, rocksteady. And when Marley finally got his star turn in a vocal group—part mod, part Motown—he, Bunny, and Tosh made sure they looked the part. That meant slim ’60s suits perfect for slipping into the cocktail parties they were never invited to, then turning the whole place out with a rude-boy ska step.

Living in Trench Town, then one of the worst slums in the world, didn’t mean you couldn’t have style. But it did mean money was so tight that you usually had only one chance to make it work—because those extra six pounds sterling weren’t coming around again for weeks, and the reason you were fashion-model thin was because you hadn’t had dinner in a month. If you were just one of the many singers, musicians, and hustlers hanging around Studio One, downtown, desperate for your big break, money would sometimes not come at all, even with hits on the radio. So that shirt had to count. That jacket had to roll just as hard at a 10 p.m. party as it did at 10 a.m. church. There had to be 99 ways to rock that one pair of jeans—and those Clarks shoes were yours only until somebody stole them. Style meant making unmatchable things match, because what you’d got was all you were going to have for a while.

A voracious student of music, Marley enrolled in his own college of sounds, devouring the records that Studio One head Sir Coxsone gave him. Marley studied them like sacred texts and instruction manuals, burrowing through each groove on his way to himself. Just like Zimmerman went through Guthrie to get to Dylan, and Jones went through Dylan to get to Bowie. By 1964, the Wailers had a hit with “Simmer Down.” But by 1966, music-industry bullshit (big hits, little money) tore the trio temporarily apart.

He still stands as the most convincing and exciting rock star in a decade chock-full of rock stars, in huge part because he had something to say, but also because he looked so fucking good saying it.

Then three things happened that changed everything. First, Bob took a break from music and went to join his mother, who had moved to Delaware. He worked in a DuPont lab and a Chrysler factory. Nothing like being away from your true love to realize how much you missed it, and Marley sank even deeper into music, passing days in his mom’s basement playing guitar. Around this time, he picked up a fashion sense that was equal parts genes, attitude, and a factory worker’s budget—big enough to leave Jamaica for a while, but not big enough to stay in the States. Check out a ’66 photo of him in the street, wearing a tight black leather jacket over a working-class hero’s overalls (from the factory job?) and a gray knit cap, and you find yourself wondering if he was spending his meager paycheck on a stylist. The overalls would become one of his signature looks, an un-rockable thing that he made rock.

Second, after returning to Jamaica, Bob became a Rastafarian. There’s enough written about Rastafari, so no need for a crash course here, but along with faith and purpose, it gave Marley a profound sense of self. He knew who he was and what he was supposed to do. And that spunky individuality spilled right over into his fashion sense, from the proto-Afro on the Catch a Fire cover to the ultimately leonine dreadlocks that reached all the way down his back. He was simply obeying his Nazirite vow to never cut it, but millions showed up just for the cool hair. It also turns out that in addition to being central to his faith, the red, green, and gold Rasta colors worked well for him, especially together. The guys at Studio One didn’t like Bob’s conversion any more than Berry Gordy liked Marvin Gaye turning serious around the same time, so Marley cut the place loose and found a new scene.