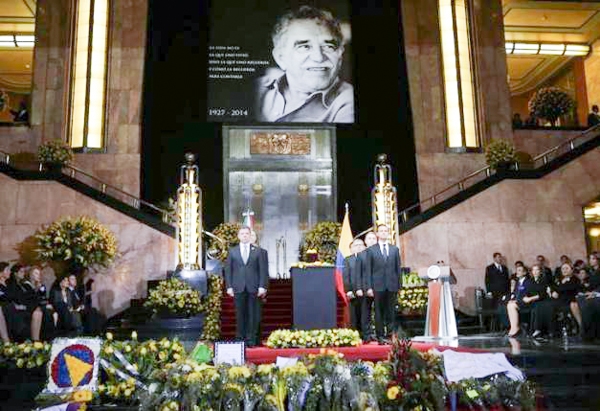 The ashes of Latin American literary great Gabriel Garcia Marquez have arrived in his native Colombia ahead of a Sunday ceremony at their final resting place, his son told AFP.

The Nobel-winning author of the groundbreaking epic “One Hundred Years of Solitude,” died in Mexico City in April 2014, at the age of 87.

“The ashes are in Colombia,” Gonzalo Garcia Barcha, one of Marquez’s two sons, told AFP Tuesday.

The ceremony will be held at the historic La Merced Cloister, a former convent which is now part of the University of Cartagena.

During the ceremony a monument to Marquez will be dedicated. It includes a bust of the author in which his ashes will be stored.

“Cartagena is the city where the Garcia Marquez family is centered. This is where my grandparents are buried. So it seemed natural that my father’s ashes would be here as well,” Garcia Barcha explained over the phone from France, where he lives.

Marquez – generally seen as Latin America’s greatest writer of the 20th century – began his career as a journalist and made frequent visits to the Caribbean city of Cartagena where he founded the New Ibero-American Journalism Foundation (FNPI) to train young journalists in the region. The university said that “at the request of the family, the ceremony will be simple,” with writers and journalists among the invitees. President Juan Manuel Santos has been invited although his attendance is not yet confirmed.