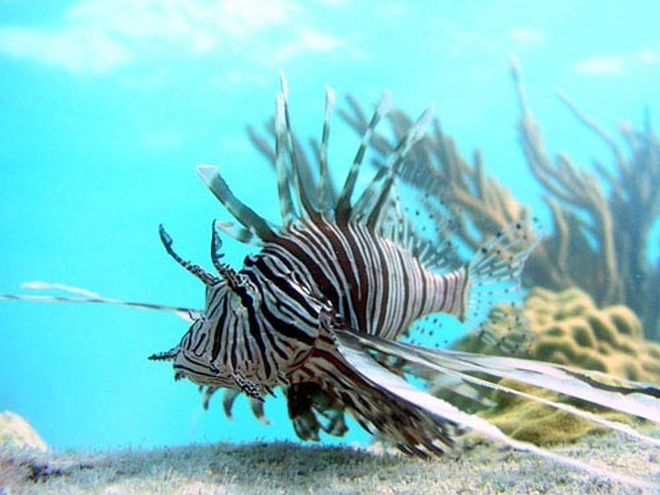 Bernetia Akinn (“Undercurrents”—St. Croix Source) reports that efforts to control the lionfish population by marketing them to consumers suffered a major setback when researchers warned they can carry the ciguatera toxin. Here are excerpts:

Researchers are continuing to hunt for a solution to the interloping lionfish and find some reasons for hope. Lionfish were first spotted in Virgin Islands waters in 2008 off St. Croix and by 2010 had been documented near St. Thomas and St. John as well. A prolific, aggressive and voracious reef species that feeds on a broad range of marine life, the lionfish answers to no predator in these waters and thus threatens to wipe out competitors and destroy the delicate balance of coral reefs.

As president of Caribbean Oceanic Restoration and Education Foundation, John Rubattino has been chasing down the invasive species for years – both in the Caribbean and off the east coast of the U.S.

Among the approaches to combating the enemy are search-and-destroy missions undertaken by a small army of volunteers. Another has been the attempt to develop a taste for the lionfish among island residents with the aim of creating a fishing industry that would keep them in check.

However, a study conducted by researchers from the University of the Virgin Islands, the University of Alabama, the U.S. Food and Drug Administration, CORE and the St. Thomas Fisherman’s Association, titled “Invasive Lionfish (Pterois Volitans): a Potential Human Health Threat for Ciguatera Fish Poisoning in Tropical Waters,” found that, like other reef fish, the lionfish can be a carrier for ciguatera. The study is available online on the Marine Drugs Journal. Published in 2013, it first received attention within the academic community and in ecological circles but recently has been more widely publicized.

A reef organism that works its way up the food chain, ciguatera toxin is all too familiar to islanders who know it cannot be detected in an affected fish – except by laboratory analysis – and that it causes a debilitating food poisoning in humans that occasionally has longterm neurological effects.

Rubattino said he still believes the lionfish can be a safe food source, as long as they are caught in areas that don’t host ciguatera. “They’re being pushed all over” (the Caribbean) as a menu item, Rubattino said. In the Virgin Islands, “We trust our fishermen to fish in our ciguatera-free zones.” He said he’s been pushing researchers and the V.I. government for more definitive information about those areas. Setting out official designations of safer areas could be tricky, however.

Howard Forbes, Jr., coordinator of the Virgin Islands Marine Advisory Service at UVI, said the university must be concerned about liability issues. He noted that the ciguatera levels found in the lionfish caught for the study were not much different than for other, commonly known carriers.

[. . .] Frank Cummings, who, with his wife owns the underwater recreation operation SNUBA, is also CORE’s education outreach director. He’s based on St. John, where he coordinates volunteer efforts to spot, report, and eliminate lionfish. Cummings said he’s eaten lionfish and found them “delicious,” but stressed that he knew they had come from an area known to local fisherman as safe from ciguatera.

“I recommend extreme caution,” he said.