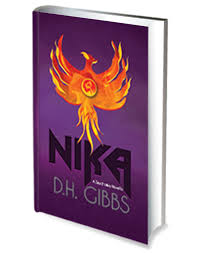 The novella, the first in the three-part Saychatk series she plans to create, is about a young orphan girl who is hiding a talent she recently discovered, and is terrified someone will find out her secret. She is then kidnapped and taken to the mysterious Saychatk island where her adventure continues.

Writing as DH Gibbs, Nika is Desari’s foray into young adult literature. However, it is not her first book.

That distinction belongs to her children’s bedtime story called Danny the Firefly, an e-book she launched on Amazon in March 2015.

She explains that Nika was an eight-chapter novella with touches of Caribbean influences. But not too much as she wanted to write something to which an international audience could relate. It was launched on March 1 and is on sale on Amazon. com.

Also, she decided to start her series as a novella so avoid overwhelming her audience with too much information. “I wanted people to get the foundation first because when I write the first full book, I’m not going to go back to explain anything again.

It will reference a lot of the stuff that takes place in the novella,” she says.

According to Desari, she chose the genre because she herself reads a lot of young adult or “young at heart” books. She says she also identified with it because she wrote the story during a time she was attempting to figure out what she wanted to do with her life.

“I think I was drawn to this because the main character is coming of age, so a lot of people can relate to her, either because they are going through that point of where they are discovering things about themselves, or they can remember that time of their lives,” she says.

Desari says she always had an over-active imagination and so she often built stories in her mind, often jutting down her ideas, but never fully exploring them until now.

Even as a teenager, she and her secondary school friends would write a lot of fan fiction.

People expressed how much they liked her writing but she never pursued it.

“I think an over-active imagination is a hazard of being an artist. I draw, paint, and I’m a graphic designer with my own company, Sandphics Creation… I was at a point where I was experimenting with a lot of stuff. I really wanted to find a career path that I loved.

You can like something, be good at it and do it but when you are doing something that you love, it’s so much better,” she says.

In her exploration, Desari realised she loved writing children’s books and decided to try it as a lot of her friends had children and she wanted to create something they could use. Therefore she wrote Danny the Firefly, a bedtime story in poetry form, where Danny goes on a night time adventure.

Keeping it simple, Danny visits different places but at the end he returns home and goes to bed, just as children should.

Since she already created illustrations and book covers, Desari found it easier to make her graphic design company into a publishing company than to look for a publisher. And so she published both of her books.

In addition, Desari was one of the first time authors acknowledged at the Bocas Lit Fest during literature week for Danny The Firefly.

Desari thanks her fiancé, who is a graphic artist, for understanding the artist in her and for being very supportive. She says her core supporters include both of their mothers and other family members, who really want to see her succeed.