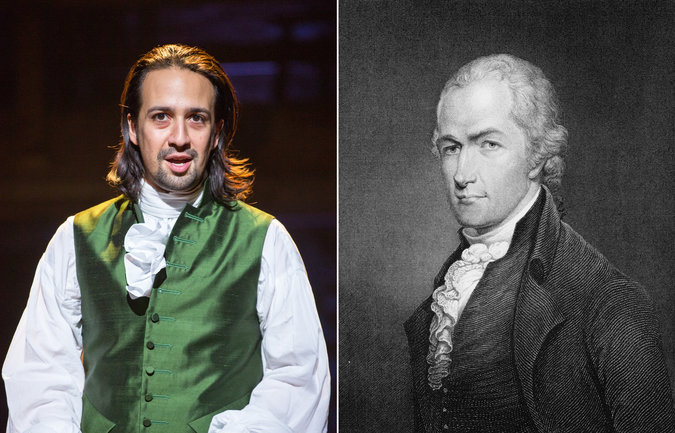 An article by Jennifer Schuessler for The New York Times.

As “Hamilton” fever has swept America, historians have hardly been immune. The megahit Broadway musical’s creator, Lin-Manuel Miranda, has won prestigious honors from the profession, including the 2015 George Washington Book Prize. More than one scholar hasmarveled at the show’s detailed presentation of the founding period’s complicated politics — not to mention the way Mr. Miranda’s dazzling rap lyrics pull off rhymes like “line of credit” and “financial diuretic.”

But even among historians who love the musical and its multiethnic cast, a question has also quietly simmered: does “Hamilton” really get Hamilton right?

In articles, blog posts and Facebook threads, scholars have debated whether “Hamilton” over-glorifies the man, inflating his opposition to slavery while glossing over less attractive aspects of his politics, which were not necessarily as in tune with contemporary progressive values as audiences leaving the theater might assume.

The conversation has yet to erupt into a full-fledged historians’ rap battle. But some scholars are wondering if one is due to start.

“The show, for all its redemptive and smart aspects, is part of this ‘Founders Chic’ phenomenon,” said David Waldstreicher, a historian at the Graduate Center of the City University of New York who last September sounded an early note of skepticism on The Junto, a group blog about early American history.

Amid all the enthusiasm for “Hamilton” the musical, he added, Hamilton the man “has gotten a free pass.”

Annette Gordon-Reed, a professor of history and law at Harvard and the Pulitzer-Prize-winning author of “The Hemingses of Monticello,” put it more bluntly.

“One of the most interesting things about the ‘Hamilton’ phenomenon,” she wrote last week on the blog of the National Council on Public History, “is just how little serious criticism the play has received.”

Ms. Gordon-Reed was responding to a critical essay by Lyra D. Monteiro, in the journal The Public Historian, arguing that the show’s multiethnic casting obscures the almost complete lack of identifiable African-American characters, making the country’s founding seem like an all-white affair.

“It’s an amazing piece of theater, but it concerns me that people are seeing it as a piece of history,” Ms. Monteiro, an assistant professor of history at Rutgers University, Newark, said in an interview.

The founders, she added, “really didn’t want to create the country we actually live in today.”

Ms. Gordon-Reed — who is credited with breaking down the resistance among historians to the claim that Thomas Jefferson had a sexual relationship with Sally Hemings — wrote in her response that she shared some of Ms. Monteiro’s qualms, even as she loved the musical and listened to the cast album every day.

“Imagine ‘Hamilton’ with white actors,” she wrote. “Would the rosy view of the founding era grate?”

Historians are generally not reluctant to call out the supposed sins of popularizers. When Steven Spielberg’s “Lincoln” arrived in 2012, a number of prominent scholars blasted it for promoting a “great man” view of history and neglecting the role African-Americans played in their own emancipation.

While the most recent critiques of “Hamilton” have focused on race, some scholars have also noted that it’s an odd moment for the public to embrace an unabashed elitist who liked big banks, mistrusted the masses and at one point called for a monarchal presidency and a Senate that served for life.

Alexander Hamilton “was more a man for the 1 percent than the 99 percent,” said Sean Wilentz, a professor at Princeton and the author of“The Politicians and the Egalitarians,” to be published in May.

Turning him into “an up-from-under hero,” he added, “seems dissonant amidst the politics of 2016.”

“Hamilton” itself, by contrast, is right in tune with today’s debates about immigration and Black Lives Matter. The show, which famously began hatching after Mr. Miranda read Ron Chernow’s biography while on vacation, portrays Hamilton, who was born on Nevis, as a penniless immigrant outsider from the Caribbean who rose through sheer brilliance and drive.

In a telephone interview, Mr. Chernow, who is the show’s historical consultant, said the criticisms by Ms. Monteiro and Ms. Gordon-Reed were based on “an enormous misunderstanding” of the show, which dramatizes “a piece of political history at a very elite” — and all-white — “level of society.”

Casting black and Latino actors as the founders effectively writes nonwhite people into the story, he said, in ways that audiences have powerfully responded to. (The Gilder Lehrman Institute of American History has created a curriculum for 20,000 low-income New York City public school students who will be able to see the musical, in a program funded by the Rockefeller Foundation and subsidized by the show.)

“This show is the best advertisement for racial diversity in Broadway history and it is sad that it is being attacked on racial grounds,” Mr. Chernow added by email. (A publicist for “Hamilton” said Mr. Miranda was not available for comment.)

The show does include one named black character, Sally Hemings, who appears in a quick cameo that lands mainly as a dig at Jefferson. (The slaveholdings of the Schuyler family, which Hamilton married into, go unmentioned.) The show, Mr. Chernow said, also makes clear that black soldiers fought in the Revolution.

Ms. Monteiro, in her article, points out that other historical African-American individuals could have figured in the story.

The show depicts John Laurens’s plan to create a battalion of slaves who would fight in exchange for freedom, which Hamilton supported. But it omits, Ms. Monteiro noted, the known role of individuals likeCato, a slave who worked as an anti-British spy alongside his owner, Hercules Mulligan, an Irish-immigrant tailor whose espionage exploits are celebrated in the musical.

And then there’s the question of Hamilton the “uncompromising abolitionist,” as Mr. Chernow puts it in his book. He was a founding member of the New York Manumission Society, created in 1785, which among other things, pushed for a gradual emancipation law in New York State.

In the show’s last song, his widow, Eliza, sings that Hamilton would have “done so much more” against slavery had he lived longer.

But Ms. Gordon-Reed, in an interview, said that while Hamilton publicly criticized Jefferson’s views on the biological inferiority of blacks, his record from the 1790s until his death in 1804 includes little to no action against slavery.

Race and slavery, she added, are invoked directly in the show mainly to underline Hamilton’s “goodness,” especially in contrast to Jefferson. But Hamilton the ardent lifelong abolitionist, she said, is “an idea of who we would like Hamilton to be.”

Other historians are more supportive of the show’s treatment of the subject. Eric Foner, the author most recently of “Gateway to Freedom: The Hidden History of the Underground Railroad,” said he wished the show had complicated its populist portrait by noting Hamilton’s elitism and dedication to property rights, which were “more important to him” than fighting slavery, Mr. Foner said.

But Hamilton, he said, was an abolitionist by the standard of the founding period. “There was a real contrast with Jefferson,” he said.

R.B. Bernstein, a historian at City College of New York who has written extensively about Jefferson, credited “Hamilton” with keeping the subject of slavery simmering underneath its jam-packed story. But race and slavery, he added, were not the only important, or timely, aspects of the show.

“It’s about how hard it is to do politics, about how people of fundamentally clashing political views tried to work together to create a shared constitutional enterprise,” he said. “And right now, that’s a message we really need.”

One thought on “‘Hamilton’ and History: Are They in Sync?”