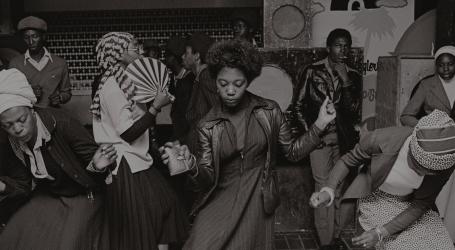 A fascinating exploration of the golden era of African-Caribbean sound systems in London from the 1950s to the early 1980s, the vibrant exhibition takes the form of an atmospheric audio-visual installation, evoking a Blues party environment within the galleries.

Through a display of historical objects, personal accounts, film footage and photographs, Rockers, Soulheads & Lovers brings to life a hugely significant era of black British history; one that evokes memories for an entire generation of black Britons for whom sound systems and blues dances provided an experience like no other.

“I am affiliated with sound system culture not as an insider, but as an outsider – a raver and who feels it and knows it,” says the exhibition’s curator Michael McMillan.

“Stepping into a sound system dance was – and still is – a sensory experience. That thumping bass in the chest, guys shanking with each other, a posse of girls rocking, weed smoke in the air; the toaster/MC chanting ‘Jah!’ and the crowd responding, ‘Rastafari!’

“We were young, rebellious, and sexy, and going to a dance required careful preparation. The last minute appointment at the hairdressers or barbers, or with the hot iron comb. Then the girls would step out looking the ‘crisp biscuit’ in a pleated ‘dub-skirt’ and an Italian silk blouse, and the guys in a Gabicci top and Farah slacks – both wearing the iconic Bally Shoes of course!”

While the 1970s birthed the widely documented punk era, it was also a time when many young black Britons were forging their own identities, as the first generation born to Caribbean parents who had migrated to the UK. This was the generation who experienced the discriminatory nature of the ‘sus’ law, which enabled police to stop and search people on the basis of suspicion – and it was largely black people who were targeted as suspects.

During this time of racial tension, it was sound system culture that, for many, provided a space where they could enjoy relief from their day-to-day trials and immerse themselves in a cultural experience, driven by music – namely reggae – that received little exposure anywhere else.

“This generation of young, gifted and black people experienced police brutality, the sus law, unemployment, racist attacks, and being criminalised in the media,” McMillan recalls. “Yet this was the moment of black radical politics, pan-Africanism and Rastafari, and reggae resonated with what many black youths – male and female – felt about living ‘inna Babylon’.

“So this [sound system dances] was the only place they could experience music that spoke to them – music that they might look for in a record shop the next day. British pop music largely ignored them and with a few exceptions, they didn’t hear reggae, soul or funk on the radio – until DJs like Tommy Vance, David Rodigan and Greg Edwards got their radio shows.”

Reflecting on the key elements of sound system culture, McMillan says: “From the 1960s through to the 1980s, sounds ‘played out’ in clubs in and around London, such as the Metro Youth Club in Ladbroke Grove, Four Aces in Dalston, Dougies in Clapton and Night Moves in Shoreditch.

“As sound technology developed, more music was imported from Jamaica, such as bluebeat, ska, rocksteady and later reggae, and custom-made sounds became integrated collectives with specialist roles. The ‘operator’ ran the sound system, the ‘engineer’ technically maintained it, and would ‘string up’ wardrobe size ‘House of Joy’ speakers, KT88 glass valve power and bespoke pre-amps, and a single turntable with the ‘box boys’.

“Then, the ‘selector’ [DJ] would ‘drop a tune’ – the A-side vocal of either a 7inch or 12inch vinyl record, followed by the B-side ‘dub’ instrumental version, while the ‘toaster’ [MC] ‘chatted’ over the mic exciting the crowd. And if the crowd loved a tune they would bawl ‘rewind!’ or ‘haul and pull up!’”

“Lover’s rock resonated with a socially aspirational generation, and men and women wanted to dance with each other, leaving shadows of themselves on the wallpaper in many house/blues parties!

“It also empowered women to take ownership of the dance and the dance floor, by, with, and for themselves, forging sisterhood.”

Though McMillan’s exhibition brings life to a specific historical experience, sound system culture is, of course, still going strong, with sounds throughout the world keeping the culture alive. Why does McMillan think the culture has been so enduring, particularly as there are so many other ways to access music today?

“Sound system culture in the UK has had a significant, yet rarely acknowledged influence on British music and dance culture,” he says.
“Sound system culture has also gone ‘outernational,’ migrating across the diaspora with the Jamaican DJ Kool Herc playing his sound in the Bronx, New York and giving birth to hip-hop.

“In a globalized, post-colonial world where black music and culture has been and is appropriated, the universality of reggae has inspired sounds in Brazil, Europe, Japan and Africa.

“In Britain, sound system culture continues to provide a fertile ground for numerous other reggae and funk-derived genres to sprout roots and grow. Jazz-funk, jungle, house, acid-house, garage, funky house, grime, drum & bass, dub-step – and so it goes on.”

Reflecting on his hopes for the exhibition, which he curated with sound and visual installations company Dubmorphology, McMillan says: “I hope that the exhibition gives acknowledgement to those people and cultural practices that have been written out of an ethnically cleansed version of British music and dance history.”