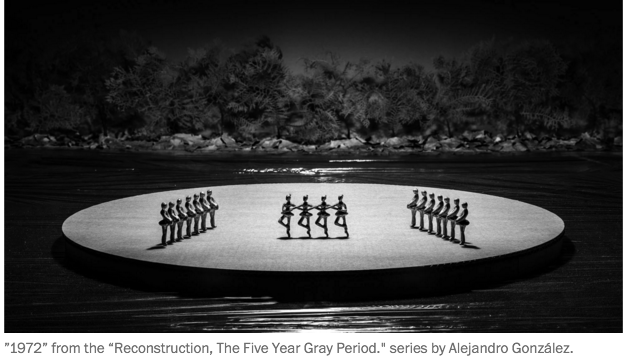 The names are Spanish, the weather tropical and the skin colors diverse, so the place depicted in “Q&A” must be somewhere in the Caribbean. More specifically? The Cyrillic lettering in Alejandro González’s work narrows it down. Welcome to Cuba.

The seven artists in the IDB Cultural Center exhibition include a few whose work is not explicitly political. Alejandro Campins doesn’t hide that he paints from photographs; here he displays one alongside the much larger canvas modeled on it. Alexandre Arrechea affixes a large architectural model to an outsize spinning top, an elegant construction that’s surely too big to actually twirl.

The other five, however, are overtly concerned with control and malfeasance. Flanking the entryway is Lorena Gutiérrez’s “Upperworld,” which matches an empty suit to a white-collar-crime video (soundtracked with an ironic pop song). Across the darkened gallery, Fidel García’s jumpy projection flashes text about “corruption and crime in society” from 1969 to 2012. In Javier Castro’s video portraits, people from Havana’s least-privileged neighborhoods strike poses but can’t quite hold still.

The other reason the lights are dim is Humberto Díaz’s “In the Spotlight,” an empty spot of floor illuminated by 21 flashlights suspended from the ceiling by wires. The visually striking installation could represent many things, but the artist specifies the intended meaning: “situations in which the excess of power defines unilaterally what is or is not important.”

Such situations would include the ones depicted in González’s four large black-and-white photos of official ceremonies from 1970 to 1975 — Cuba’s “gray five-year period.” Actually, the pictures are not of the events, but of the artist’s detailed miniature models of them. The bilingual signs and icons of Marx, Lenin and Che look authentic, but the structures are clearly made of cardboard and peopled by figurines of slightly lumpy lead. For González, who wasn’t born until 1974, reconstructing moments of Communist pomp he never witnessed is a way of questioning an outmoded national myth.