In the Miami Design District, at Locust Projects, performance artist Bryan Zanisnik’s “Philip Roth Presidential Library” has created a homage to copyright conflict between the artist and writer Philip Roth, and is designed to evoke conversation around free speech. The show is on view through March 19, 2016. See excerpts below and full article by Siobhan Morrissey here. [Nothing “Caribbean” here besides the venue, but, as a performance art and Philip Roth fan, I couldn’t resist!]

As Jim Croce famously said, “You don’t spit into the wind.” Philip Roth, the great American novelist, should have heeded that advice when he demanded that performance artist Bryan Zanisnik cease and desist from silently reading one of his books during a show in New York a few years ago.

Far from ceasing, Zanisnik continued with the show and created a spin-off that is now featured at Locust Projects through March 19 (coincidentally, Roth’s 83rd birthday). With his new show — Philip Roth Presidential Library — Zanisnik both pokes fun at what could be perceived as the author’s pomposity and invites others to be caught in public silently reading one of Roth’s works.

The impetus for the show started on March 30, 2012, opening night at New York’s Abrons Arts Center of Bryan Zanisnik: Every Inch a Man. The artist had created a 12-foot-tall Plexiglas installation that essentially became a wind tunnel, with baseball cards and U.S. currency swirling around him, while he silently read from Roth’sThe Great American Novel. The white shoe law firm of Milbank, Tweed, Hadley & McCloy, with offices in New York, Los Angeles, Washington, London, Frankfurt, Munich, Beijing, Hong Kong, Singapore, Tokyo and São Paulo, sent some men in suits to shut him down for allegedly violating Roth’s copyright.

[. . .] “All I was doing was holding a copyrighted work in public. If a court sided with Roth, that means every time someone held a book in public—of anybody’s—they’re violating copyright. You wouldn’t even be able to carry it.” The artist and his pro bono lawyer mused that all books would have to be kept out of sight for fear of litigation. “We joked it would be like a beer,” he says. “You’d have to brown bag your book.” [. . .]

“It was going to be a small reference,” Zanisnik says of the Roth novel. “It’s this huge installation about a lot of different concepts and Roth was an accent or note in it. But then because of the legal battle, it’s become so much more. If I had done that performance in 2012 and there was never that legal battle, there would never be the Presidential Librarytoday.” 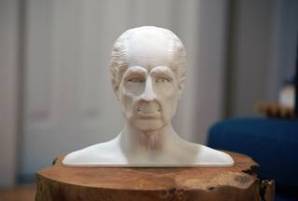 The tongue-in-cheek library features a salon in the Locust Projects entryway. It is a cozy reading nook with chairs, a table, a lamp and several of Roth’s books. Included in the display is a scrapbook the artist compiled of clippings from the lawsuit. On the walls are a couple of cross-stitch samplers, one featuring Roth’s image, another representing the cover of his seminal work, Portnoy’s Complaint. In keeping with other presidential libraries, Zanisnik even created a 3-D printed bust of Roth’s head.

The actual library itself is contained in a second exhibition room in which the artist created several floor-to-ceiling pillars framed in wood and covered in drywall. He then punched holes in the pillars and placed shelves that display Roth’s books from within the pillars. [. . .]
For full article, see http://www.miamiherald.com/entertainment/visual-arts/article61297307.html