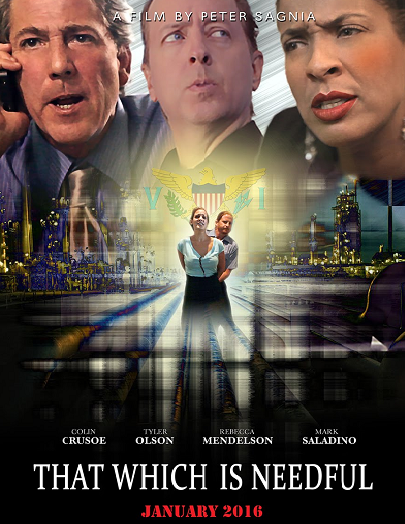 A St. Croix-made film, That Which is Needful—directed by Peter Sagnia—will premiere January 22 and 23, 2016, at 7:00pm, at the James C. Savage Center for the Performing Arts in Frederiksted, St. Croix. [Tickets are $12 and can be purchased at the door or online at www.facebook.com/thatwhichisneedful.]

This feature-length movie was filmed entirely on St. Croix, U.S. Virgin Islands and tells the story of two brothers who have inherited their father’s investment firm, which is on the brink of bankruptcy due to the closing of the oil refinery on the island. The brothers face a moral dilemma as one of them attempts to save their father’s legacy using legal and ethical methods, while the other brother explores darker, more corrupt means. The film not only explores issues of economic hardship, it ponders the value of family and relationships as well as the value of choosing the higher road to find solutions in times of challenge.

Actor, writer and director Peter Sagnia was born in the East End of London, England, and has been working in theater and film here in the Caribbean for several years. He has been instrumental in developing the performing arts on St. Maarten and elsewhere in the Caribbean. Sagnia has produced, directed and acted in several films and theater productions including “The Prisoner,” “Antillean Green Card,” “Mixed Blessings” and “Sour Grapes.” [. . .]