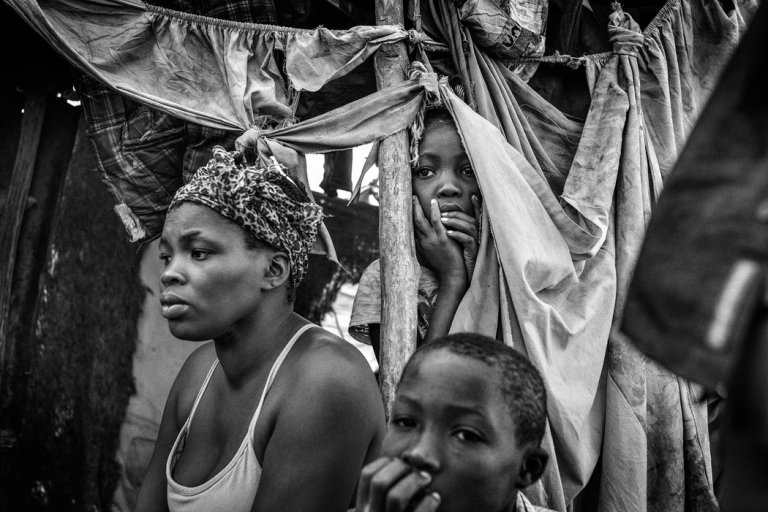 Many thanks to Luis Figeuroa-Martínez for sharing this item from The New York Times. This important article by Jonathan M. Katz (with photographs and video by Patrick Witty, 13 January 2016) traces the roots of the Dominican-Haitian crisis, dating back to 1930, when General Rafael Trujillo came into power in the Dominican Republic. Here are just a few excerpts from this detailed and well-researched piece:

[. . .] People of Haitian descent make up by far the largest ethnic minority in the Dominican Republic, though estimates of their numbers vary widely, from half a million to more than a million, out of the country’s population of 10.4 million. Some were born there, some immigrated, others move back and forth along the mostly unmarked and unguarded border. They are all lumped together in the Dominican imagination as, simply, haitianos, and many of them make up an underclass that is the backbone of the country’s labor force, tending its farms, cleaning its floors, building its houses and skyscrapers, staffing its all-inclusive resorts.

Like ethnic minorities the world over, haitianos are frequent targets of discrimination. But what had been a simmering tension boiled over into a panic last June, when, after having at least temporarily stripped an estimated 200,000 Dominicans of Haitian descent of their right to citizenship, officials threatened to force thousands ofhaitianos over the border dividing the island of Hispaniola before the month was out.

Dominican immigration officials showed off the new buses and “reception centers” that would be used to process those who would be expelled. In a country with a history of sporadic violence against its Haitian minority — there are at least a few lynchings documented every year — these reports took on an ominous cast.

The crisis stemmed from a court case filed in 2008 by Juliana Deguis Pierre, a Dominican of Haitian descent whose local civil registry in the central Dominican province Monte Plata refused to issue her a national ID card. Deguis claimed the bureaucrats discriminated against her because she had dark skin and a Francophone name — markers of Haitian identity. The case eventually arrived at the Constitutional Court, a high court created in 2010 to interpret constitutional law. In one of its first major rulings, the court decided in 2013 that Deguis should never have been a citizen in the first place because her parents did not have enough documentation to prove legal residency before Deguis was born.

Using the same reasoning, the court determined that anyone born to undocumented immigrant parents was not a citizen — revoking for them the guarantee of birthright citizenship written into the Dominican Constitution in 1865. All those newly minted foreigners, as well as actual undocumented immigrants, were then ordered to register with the government in what became known as the “regularization plan,” or face expulsion. Nearly everyone affected was of Haitian descent. The 2013 ruling became known simply as la sentencia: the verdict.

Hard-line nationalists wanted the ruling enforced strictly. But President Danilo Medina — a moderate in the ruling Dominican Liberation Party — was wary of international criticism, not to mention threats of boycotts against the $8.3 billion Dominican tourism industry, which provides nearly one-sixth of the country’s G.D.P.

Without challenging the court’s decision, Medina announced a second plan in the summer of 2014, a “naturalization” process that would allow Dominican-bornhaitianos to apply for residency status, which would put them on a path back to citizenship. But by February, only about 64,000 people were being processed — a fraction of the country’s Dominican-born haitiano population. (The government says 55,000 of these people have had their citizenship reinstated; activists contest this claim.) The paperwork was left in the hands of a government agency whose chief, Roberto Rosario, had called local officials who issued birth certificates to people of Haitian descent “a group dedicated to destroying the fundamental documentation of dominicanidad,” or Dominicanness.

As the June deadline neared for all those still considered foreigners to register, tension grew. Police officers fired tear gas at desperate crowds trying to enter Interior Ministry offices to get papers. Meanwhile, the full implications began to dawn on those outside the Dominican Republic. Amnesty International warned of “mass expulsions.” “Families are going to be broken apart,” Wade McMullen of the Robert F. Kennedy Human Rights organization told The Washington Post. The Dominican-American writer Junot Díaz told a panel audience in Miami’s Little Haiti neighborhood, “There is a state of terror in the Dominican Republic.” He later told the media organization Fusion, “The last time something like this happened was Nazi Germany, and yet people are, like, shrugging about it.”

But when midnight struck on June 17, the buses and processing centers sat idle. Immigration patrols did not swarm into Haitian neighborhoods of Santo Domingo. Families were not seized from farms. The Dominican minister of the interior and police, José Ramón Fadul, offered mild assurances, telling The Associated Press the day after the deadline that any future “repatriations” would be drama-free: “It will be a gradual process, as it should be, without any sudden surprises.”

As international attention turned away, however, people of Haitian descent quietly began crossing Hispaniola’s divide. In some cases, they were removed by Dominican troops and immigration patrols, which have officially deported 14,000 people since the June deadline, according to the Dominican government. But far more have left on their own — some 70,000, according to the Dominican Republic’s director general of immigration. They have become voluntary migrants of the least voluntary sort, fleeing an atmosphere of fear and confusion created by ever-shifting laws, vague threats, byzantine registration programs and spasms of racial violence.

[. . .] In 2004, the Dominican Congress, riding a wave ofantihaitianismo, passed such a law. The Inter-American Court of Human Rights ruled that by denying birth certificates to Haitians’ Dominican-born children, the government had violated the universal rights to nationality and equal protection. But instead of softening the law, the government passed even harsher ones. In 2010, President Leonel Fernández convened a national assembly to draft a new Constitution, which formally excluded the children of people residing “illegally in the Dominican territory” from citizenship altogether.

[. . .] Thousands more people of Haitian descent remain in the Dominican Republic, in legal limbo. According to the Dominican government, 240,000 people have registered under the regularization program to stay for one or two years, but a quarter of those people haven’t gotten their cards. The naturalization applications of other Dominican-born people are still being processed, which leaves thousands more who did not apply for citizenship at all and were accordingly stripped of it.

Those who already fled to Parc Cadeau were trying their best to live normal lives despite the circumstances. Because of the dirt storms, nearly everyone cooked on open fires inside the shelters. I heard about at least one shelter catching fire on each of the four days I was in the camp — usually during the evening meal, which was often the only one the residents ate all day. The week I visited, the Haitian Ministry of Health confirmed the presence of cholera in the camp, where people drank untreated water from the river and used the surrounding hills as a toilet. At a cholera ward in Anse-à-Pitres, I met a couple from Parc Cadeau whose 12-year-old son had just died.

The conditions were worse than anything I saw in the Port-au-Prince displacement camps after the 2010 earthquake, which attracted the attention — for better and for worse — of a flotilla of aid groups, nongovernmental organizations and foreign militaries, as well as the Haitian government. [. . .]

[. . .]  In July, Secretary General Ban Ki-moon of the United Nations raised the issue of denationalization and expulsion in a speech to Caribbean heads of state in Barbados, but only briefly, saying that he had “discussed this with the president of the Dominican Republic” and trusted there would “be further progress in resolving this matter.” The Organization of American States sent a fact-finding mission to the Dominican-Haitian border region in July. It returned with vague recommendations to improve the registration process, offer aid to the displaced and “facilitate dialogue” with the Haitian government.

In September, James Brewster Jr., the American ambassador to the Dominican Republic, visited a detention center at the border crossing of Dajabón with Gen. John F. Kelly, head of the United States Southern Command. He looked on approvingly as a military officer helped a Haitian man fill out paperwork. “We’re happy with the process,” Brewster told Dominican reporters. Brewster, a top Obama fund-raiser appointed to the post in 2013, declined to grant an on-the-record interview for this article. State Department officials told me Dominicans “are more receptive to behind-the-scenes discussions than discussions in the public sphere.”

The delicacy of Brewster’s position owes something to the fact that, nearly a century after the American occupation helped draw the border dividing Hispaniola, the United States government is still committed to fortifying it. Citing counterterrorism needs and the fact that the Dominican Republic and Haiti are conduits for cocaine bound for the United States, the United States helped create and train Cesfront, the border force that most likely deported Jean in March, and has provided biometric equipment of the sort used to process immigrants and deportees. It has given $44 million in military assistance to the Dominicans since 2010. [. . .]

Jonathan M. Katz is a freelance journalist and the author of ‘‘The Big Truck That Went By: How the World Came to Save Haiti and Left Behind a Disaster.’’ He worked as a correspondent for The Associated Press in Port-au-Prince, Haiti, and Santo Domingo, Dominican Republic.