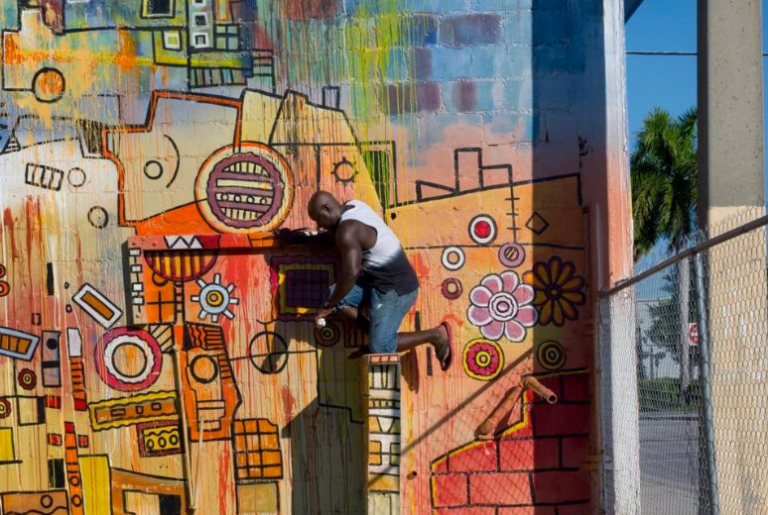 This article by Christian Portilla appeared in The Miami Herald.

When Turgo Bastien created his first painting, it wasn’t with a brush or acrylic paint. The artist, then 8, turned a chicken feather into a brush, soaked it in house paint and used an old shirt as the canvas.

It was a neighbor who encouraged him to pursue art for a living.

“She looked at my work and said, ‘Turgo, you’re an artist, you can sell this.’ I was really surprised because I didn’t know I could do that,” said Bastien, now 47. “In Haiti, you have to work hard to find a job and make money.”

Bastien, who followed his neighbor’s advice, has made a living through art ever since. Recently, he was commissioned to paint a building in Little Haiti.

He painted for a month; he said he’s proud of his accomplishment.

“I’m glad that I was able to give art to this community,” said Bastien, who looks forward to positive changes happening in the area. “The building is a focal point in this neighborhood, but it still lives up to the Haitian culture because of the colors and designs.”

The artist used more than 20 colors and mixed them to create his own shades. The painting is made up of shapes, faces and hardware pieces outlined in black.

Bastien said he didn’t know what he would paint until the brush touched the wall.

“My work is abstract and improvised. I just go based off what I am feeling at the moment,” he said. “I incorporate certain words or elements into my work so the viewer can be inspired to think about what they are seeing. This is how I express myself and what I see happening in the world around me.”

For Bastien, inspiration comes from his Haitian roots as well as the elements that surround him.

“Trees, kids, music and my daily interactions spark my mind to create,” he said. “I embrace the positivity of these interactions, and they show in my work.”

The building, which used to be the St. Claire Laundry and Dry Cleaners, is Bastien’s largest piece to date. He named it The Window of The Future to juxtapose it with the building’s history, which dates to 1926.

St. Claire Cleaners, which opened in 1962, sold its name and building in 2006. Earlier, the site was a gas station, said Albert Jimenez, son of Filomeno Jimenez, who owned the cleaners and retired at 85. The new building owner eventually moved out, and it is currently vacant.

“I used to work in the summer with my dad at the cleaners,” Jimenez said. “Sometimes, I would find coins with the gas station’s logo on the floor.”

The 89-year-old building remains a fixture in the Little Haiti neighborhood.

The building was purchased last year by developer and Little River Business District Association President Mallory Kauderer, who uses it as an office for his real estate brokerage business.

Kauderer partnered with Teddy Pierre-Louis to open District Realty Advisors. When searching for an artist to paint the building, they wanted to make sure the style represented the neighborhood and its residents; they want to run their business with the same idea — to keep Little Haiti as close as possible to its culture.

“We let [Bastien] know some of the elements we wanted incorporated but gave him total artistic freedom,” Kauderer said. “I had seen his work before at MOCA and knew he was the guy for the job.”

Kauderer and Pierre-Louis also wanted the building to keep its details and all its original features. They said it’s about “enhancing not improving,” calling their style “shabby chic.”

The ceiling fixtures have been revived with new LED lights. The windows are internally reinforced with acrylic glass, and the original forest-green garage door from the gas station days hangs permanently open. The paint, doors and all other accessories also remain. There’s even an old washing machine in the building’s office area.

Kauderer and Pierre-Louis plan to keep their company in the building until they venture into the redevelopment phase of the four-corner block where the building is located.

“We are still in the early stages of this project. We really don’t know what will happen with it until we get a feel of what the tenants need and how the neighborhood responds to the changes,” Pierre-Louis said.

Kauderer agrees: “We do know that we want to respect the people who are already here and enhance the area for the residents.”

Bastien said working on the building was a perfect way to showcase the changes happening in Little Haiti as well as the neighborhood’s history.

“I think that people really embrace the art and admire it as they go by,” he said. “I hope that this piece serves as a symbol to embrace the history of the neighborhood and the people who live here.”

For the original report go to http://www.miamiherald.com/news/local/community/miami-dade/midtown/article47229185.html#storylink=cpy