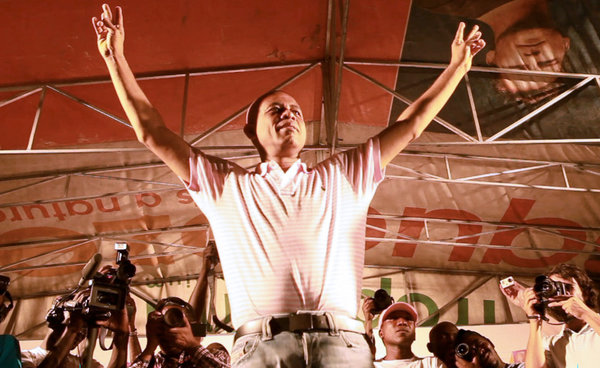 Neil Genzlinger (The New York Times, 19 November 2015) reviews Ben Patterson’s Sweet Micky for President, a documentary that follows the trajectory of Haitian president Michel Martelly from popular singer to politician. Genzlinger concludes that this is a shallow attempt to burnish Martelly’s legacy while brushing off his administration’s rocky four years.

One of the decade’s odder political stories is revisited, without much illumination, in “Sweet Micky for President,” a documentary by Ben Patterson about how the current president of Haiti, Michel Martelly, came to win that office. It’s a friendly and shallow look at the ascendance of a pop-star-turned-politician whose presidency, now more than four years along, has hardly been a panacea.

Mr. Martelly was a popular singer for two decades before deciding, seemingly on a whim, to run for president in 2010. The film tells the story somewhat obliquely, from the perspective of Pras Michel, once a member of the Grammy-winning group the Fugees, who is a producer of the film and here takes credit for persuading Mr. Martelly to run.

We see moments from the campaign, mostly of Mr. Martelly spouting generalities to enthusiastic crowds, leading to a disputed first round of voting and then, in April 2011, his election in a runoff. A Fugees subplot is threaded in as well: For a time, Mr. Michel’s bandmate in that group, Wyclef Jean, was also a candidate.

The country, of course, was still reeling from the 2010 earthquake when Mr. Martelly was campaigning, but the film, after aggrandizing both Mr. Martelly and Mr. Michel, stops at Election Day. We learn nothing about how the transformation from pop star to president has played out.

Guess what? It’s been a rocky four years. Near the end the film tries to brush this off; the point, it claims, isn’t how Mr. Martelly has performed in office, it’s that the Haitian people were somehow empowered by his election. Eh. Haiti is now in the process of choosing a successor to Mr. Martelly. This film mostly seems to be getting an early start on burnishing his legacy.