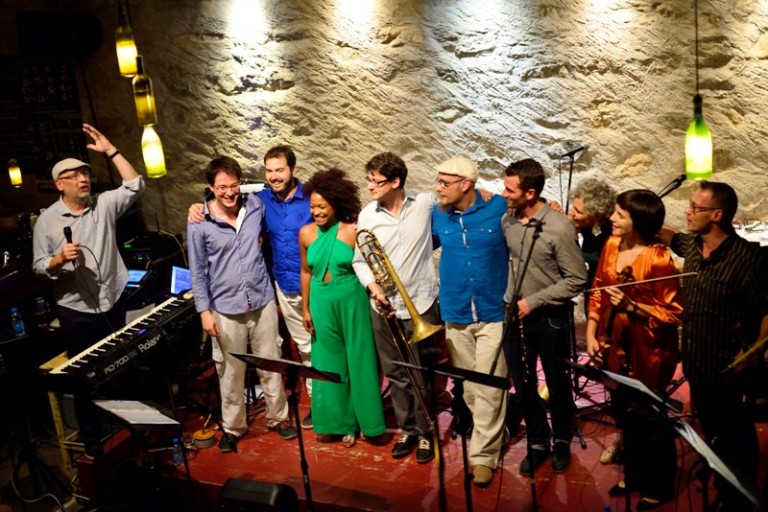 Maya Quiroga writes about the Swiss band Siga Volando, which is presently recording an album at EGREM’s Areíto studio with the accompaniment of Cuban singer Susana Orta and production by musician Alejandro Mayor, director of the Gala Mayor band.

Swiss band Siga Volando emerged eight years ago with a format typical of Cuban charanga typified by including in its line-up violins, flute, trombone, bass, güiro, kettledrums and a cello. Such instruments are not commonly seen in the European music world. It all started fourteen years ago when pianist Claude Montandon and kettledrum player Chantal Ciaranfi, who worked in Cuba with Calixto Oviedo of the popular Cuban band NG la Banda, gambled on creating a band with Cuban musicians who played salsa music.

The truth is that in cold Switzerland there are many young people who dance very well to the rhythms of the largest of the islands of the Antilles. This is due to the creation of many dance academies and the interest in studying Caribbean rhythms. Chantal and his colleague Claude are a clear example of it.

Today, Siga Volando’s sound is quite different from its original format. Its current members include musicians from the symphony orchestra, jazz players and Cuban singer Susana Orta. An art instruction graduate of Cuba’s Enrique José Varona Pedagogical Institute where she did mid-level studies in singing, Orta had the privilege of performing with the Novel Voz vocal band for fifteen years.

When I first met the members of Siga Volando at the prestigious Areítos Recording Studio I was amazed at the contagious style of this orchestra. According to its director, the group made a surprising turn after singer Susana Orta joined it five years ago. Claude Montandon plays the piano in a very special way. I have no doubt but that he carries Cuban music in his blood, even though he is born in France and living in Switzerland.

Why that interest in combining Cuban music with other styles?

“One important reason is that we did not have musical roots that developed in the 20th century. So, we began looking for them in jazz from US American music and in Latin Music, especially Cuban. It was something very new for me that gave me much pleasure.  Siga Volando fuses concert music with the feeling of Cuban music; and we have a repertoire of dance music. We do not know any other bands in Switzerland or France that combine salsa with charanga and violins, as we do. Nourishing from historical roots is very important for us. We have performed Los tres golpes by Ignacio Cervantes, La Bella Cubana by José White, Son de la loma by Miguel Matamoros. It is a speciality of Siga Volando.”

How is your music received in Switzerland?

“Before the 1970s salsa and Latin music were not much known in Europe. Cuban music had great success around the world with the arrival of the Buena Vista Social Club. That passion has now abated a little and it is more difficult to find a loyal public. Today there is other music that is more popular. However, we have a very warm acceptance whenever we play at small jazz clubs and festivals.” [. . .]