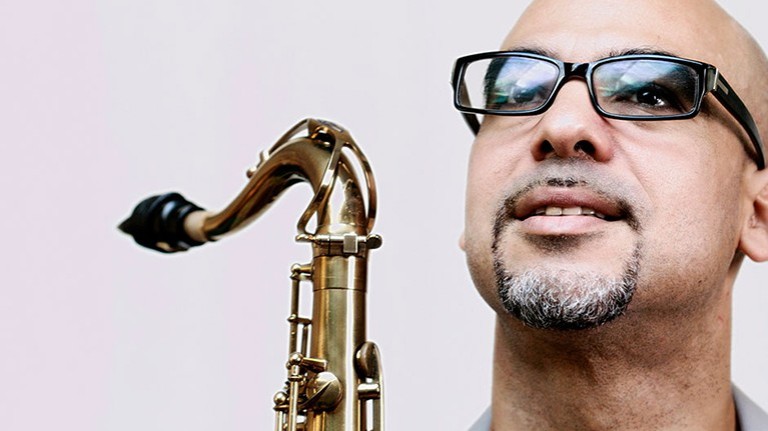 Bio: Jacques Schwarz-Bart is a New York based jazz saxophonist. His mother is the Guadeloupean novelist Simone Schwarz-Bart, author of The Bridge of Beyond. His father was French-Jewish author André Schwarz-Bart. The two published a joint novel, Un plat de porc aux bananes vertes, in 1967. The family traveled widely, living in Senegal, Switzerland, and Goyave, Guadeloupe. Jacques Schwarz-Bart is dubbed “Brother Jacques” and his music has incorporated rhythm and blues as well as hip hop influences. His musical path is atypical. At age four, he was offered a Gwo ka drum, and Anzala, showed him how to play the seven fundamental rhythms: Toumblak, Graj, Lewoz, Kalagya, Padjanbel, Mende, Woulé. At age six, while living in Switzerland, he discovered jazz music through his best friend’s father’s record collection. Fascinated, he taught himself guitar by playing along with records. By age eleven, he was sitting in with the players of the local Lausanne scene, but soon after, his family relocated to Guadeloupe. There, without a jazz scene, he concentrated on his studies, most notably at the prestigious School of Government called Sciences Po, and eventually landed a job as a Senator’s assistant in Paris. At twenty-four he appeared poised for a more conventional success, until by chance he tried a friend’s tenor saxophone. He practiced between his long hours at the Senate, and three years later, he abandoned his nascent career to attend Berklee School of Music, in Boston.

Raul Da Gama writes about his album Jazz Racine Haïti: This album by the composer and tenor saxophonist Jacques Schwarz-Bart Jazz Racine Haïti is significant for several factual reasons and the core aspects and of the internecine connection of these aspects with the music triangulated between Africa, Europe and the Americas. First the facts: the people of Haïti—erstwhile slaves from the kingdom of Dahomey were the first to be freed from bondage. It is known that groups of this Diaspora dispersed between Haïti, Guantanamo, Cuba and Louisiana, especially New Orleans. This gave rise to a new triangulated source of the African-Cuban-American music of early jazz and what has seemingly fueled the spiritualism of jazz throughout its history until even the modern day, via Santeria, Voodoo and Candomblé. [. . .] As with his soul so also with his music and relationship lies at the heart of the meditative music of Jacques Bart-Schwarz. Music; that is the “Racine” music and the kinship that lies at the root of Voodoo melds with jazz and—in the very essence of this (jazz) music—the blood-curdling, spine-chilling blues from whence Jazz was born is what bursts forth as in a vortex from the horns of Mr. Schwarz-Bart and Etienne Charles and from the chants of the Voodoo priests Erol Josue and Ronza Zila. The drumming and ritual drumming of Obed Calvaire and Jean Bonga… Sound and silence; silence and sound. [. . .]

Mr. Schwarz-Bart through his liquid glissandos that dapple bluesy phrases and spiritual intercessions has created a new language between tenor saxophone and trumpet. And for that Mr. Charles seems to be in the right place at the right time. Mr. Charles is himself highly spiritual and these bedfellows are pre-eminently disposed to making music that is complex in its proverbial imagery of Voodoo and the moveable metaphor of jazz. [. . .]